AFTER the Slovak Prime Minister surprised the nation with a comment suggesting that European Union enlargement needed a "break", he and two top officials backpedaled and said the Slovak Republic supports EU enlargement after all. 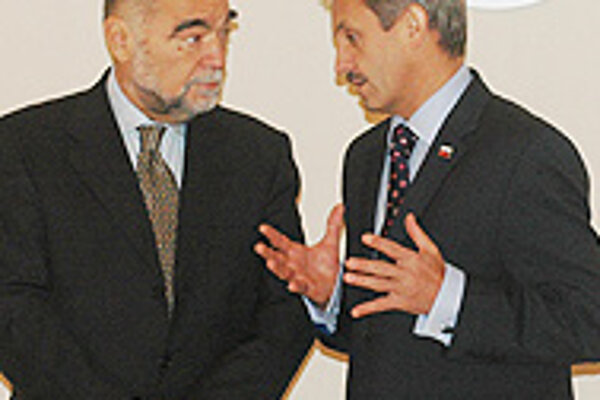 Font size:A-|A+0
AFTER the Slovak Prime Minister surprised the nation with a comment suggesting that European Union enlargement needed a "break", he and two top officials backpedaled and said the Slovak Republic supports EU enlargement after all.

The apparent lapse in official foreign policy line came during Prime Minister Mikuláš Dzurinda's recent visit to Berlin on November 3, when he agreed with outgoing German Chancellor Gerhard Schröder that EU enlargement should be put on hold.

The SITA news agency reported that, while in Germany, PM Dzurinda argued that the European Union's "absorption capability" had limits and neither Turkey nor the Balkan countries could expect to become members soon.

The reports caused a stir on the home front, with President Gašparovič and Speaker of Parliament Hrušovský showing surprise at the prime minister's statement.

It has been Slovak policy to support further EU enlargement, especially in the case of Croatia. Slovakia has expended significant diplomatic capital on Croatia's behalf to get accession talks restarted between the EU and Croatia after the Slavic country was accused of resisting efforts to cooperate fully with the UN war crimes tribunal.

The Movement for a Democracy (HZD), the political party founded by President Gašparovič, was distressed enough by the PM's alleged misstep that it issued a statement saying that Dzurinda had made a "serious step behind the line" in terms of Slovak foreign policy.

"In this particular area there is positive agreement between the opposition and the coalition," said MP and HZD member Miroslav Maxon.

After a meeting with Gašparovič on November 3, and before the PM's remarks came to light, the Croatian president said that Slovakia could become a role model for his country in joining the union. The two heads of state emphasized friendly relations between Slovakia and Croatia and flattered each other's governments. Mesic even noted that Croatians were taking advice from Slovak experts regarding accession talks.

The reports of Dzurinda urging a hold on further EU expansion seemed to perplex the Croatian media.

According to the TASR news agency, however, the Croatian news wire HINA quoted Dzurinda on November 7 addressing the Croatian cabinet office, assuring them that Croatia could count on Slovakia's support for its bid for European Union integration.

Dzurinda reminded the Croatian officials that he was the first prime minister among new EU member states to visit Zagreb after the EU reopened accession talks with Croatia in October 2005, TASR reported.

Top Slovak officials played down the whole affair with Dzurinda's statement in Berlin as a misunderstanding.

Dzurinda told a room full of reporters that by saying "break", he did not mean that EU integration should stop. He said he meant that EU integration could rest for a bit (take a break) and focus on other issues finally because it had finally reached a decision to move forward with Turkey as well as reopen integration talks with Croatia.

"After October 3, EU leaders saw space to focus on the [EU's] financial perspective," PM Dzurinda explained at a press conference on November 7.

"I am glad we explained what was meant," said President Gašparovič after the one-hour meeting.

"Our foreign policy concept remains unchanged. We will continue to stand behind Croatia, but the country alone must fulfill the conditions [for EU entry]. We cannot do anything in this area. However, our support for Croatia persists," said the president.

Speaker of Parliament Hrušovský added: "We must practise such politics that Croatia remains hopeful that after fulfilling all its negotiation conditions, it will be accepted into the EU."

Dzurinda noted that Slovakia actively helps Croatia in its integration efforts. The PM said he has personally initiated the creation of a joint negotiation team, which includes former Slovak negotiators, which should help and advise the Croat team. The experts are expected to meet in the Slovak capital at the end of the year.