Filtering Bollywood for the rest of us

HOLLYWOOD has always peddled spectacle. Today this typically means special effects-driven action movies. But at the height of Hollywood's golden age - the late 1940s and 1950s - when the use of colour and the widescreen format came into prominence, the movie studios sang a different tune. 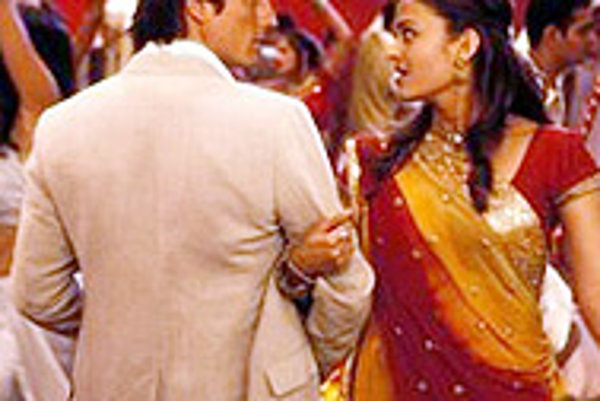 HOLLYWOOD has always peddled spectacle. Today this typically means special effects-driven action movies. But at the height of Hollywood's golden age - the late 1940s and 1950s - when the use of colour and the widescreen format came into prominence, the movie studios sang a different tune. Grand historical epics and lavish musicals reigned supreme. Due to self-imposed censorship, Hollywood used heavily choreographed dance numbers and passionate songs to imply what the characters could not explicitly express (i.e. sexual desire).

But to a young, contemporary Western audience weaned on more "realistic" movies, musicals have fallen out of favour. This makes Bollywood - and perhaps also Bride and Prejudice, the new Hollywood/Bollywood mish-mash from Bend it Like Beckham director Gurinder Chadha - a tough sell. Bollywood - the term used to describe the thriving film industry of Bombay (Mumbai), India - adheres to a strict formula not seen since the age of the great Hollywood musical.

Typically, they're stories about star-crossed lovers told using heavily choreographed song-and-dance numbers. Because onscreen sex is taboo, these movies use the great spectacle of colour, movement, and music to depict these romances. For an Indian (or someone else from Southeast Asia), these musicals are the most popular form of entertainment. For a typical Western audience, these movies might be an amusing curiosity at best.

Bride and Prejudice aims to bridge this gap - to introduce the West to the thriving Indian art form. But it makes some concessions. The music infuses its primarily Indian songs (there's one Hollywood musical style number) with a Western production sensibility - most inexplicably through a song by American R&B star Ashanti that adds nothing beyond a recognizable face. Furthermore, the song-and-dance interludes, though elaborate and vibrant, are not quite as excessively garish as most of their Indian counterparts.

Still, Chadha tries to stay true to the format and to Indian mores; apart from a couple mildly suggestive sequences, the movie and its characters remain chaste.

For source material, she steps away from India altogether: the movie is based on Jane Austen's Pride and Prejudice. Austen's work has lent itself to a great and varied number of movie adaptations - with Amy Heckerling's Clueless still being the best. Austen's interest in women who fight against a system that tries to place their worth solely on their marriage prospects translates well to contemporary India, where arranged marriages are still commonplace.

Austen's heroines are frequently stubborn, but always loveable - and Pride and Prejudice's protagonist is no different. Thus, Chadha had to carefully choose her leading lady - to find an Indian star who would appeal to Western audiences. She could have done no better than Aishwarya Rai. As Lalita Bakshi, the second of four daughters in a middle class Indian family, Rai is smart, funny, occasionally stubborn but always loveable, and disarmingly beautiful: Rai (one of Bollywood's biggest stars) has an intense beauty worthy of any great old Hollywood star.

Lalita's mother (Nadira Babbar) eagerly tries to marry off her daughters in the hope of improving her family's social standing. While at the marriage celebration of a good friend, Lalita meets Will Darcy (Martin Henderson), a wealthy, attractive American who she immediately finds arrogant and obnoxious. But, try as she might to get him out of her head and distract herself with other people, Lalita is powerfully drawn to him, and vice versa.

The movie proceeds with their tentative and occasionally bumpy dance towards love, punctuated by bright, loud songs. These songs may not be quite as bright and loud as actual Bollywood fare, but if this is the only way for most Westerners to experience these lively movies, then so be it.