AN INCIDENT in which deputy immunity saved a drunken MP from the consequences of reckless driving poured fresh resolve into the Justice Ministry's efforts to narrow the scope of deputy immunity. 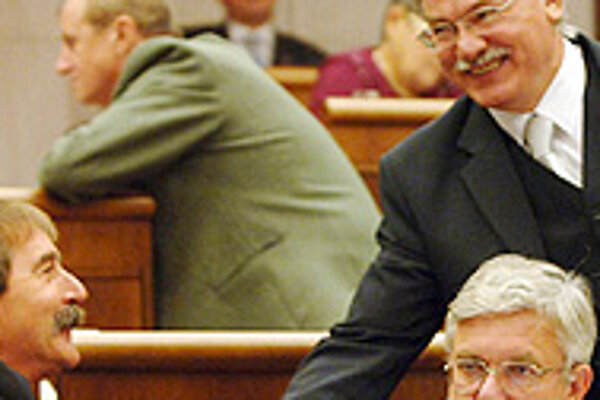 Font size:A-|A+0
AN INCIDENT in which deputy immunity saved a drunken MP from the consequences of reckless driving poured fresh resolve into the Justice Ministry's efforts to narrow the scope of deputy immunity.

On the night of November 13, opposition MP Ján Cuper caused a car accident while driving under the influence of alcohol. Unlike a regular Slovak citizen who must obey the nation's zero-tolerance laws or face serious consequences, Cuper neither received fines nor had his driver's licence revoked. Instead, the Movement for a Democratic Slovakia (HZDS) deputy walked away without penalty for breaking the law.

Cuper, running in the upcoming regional elections for Bratislava's higher territorial unit, crashed into a parked car and hit a traffic sign in Modra, a town close to Bratislava. Total damages are estimated at Sk160,000 (€4,100).

Breath tests taken immediately after the accident showed Cuper intoxicated with over two parts of alcohol per thousand parts of blood, representing 97 milligrams per litre, the police informed The Slovak Spectator.

Ivica Kmeťová, who works at a centre for the treatment of drug dependencies in Košice, told the SME daily that for an average man weighing 70 kilogrammes, the amount in Cuper's body would be the equivalent of 10 shots of hard alcohol, 10 beers or 10 glasses of wine.

On the night of the accident, Cuper argued that his alcohol level was just 0.8 parts of alcohol per thousand parts of blood. He said that he had only consumed one glass of wine that day, at lunchtime. However, TV crews called to the scene recorded Cuper seemingly drunk. The MP had difficulty speaking to reporters.

Police officers at the scene initially withheld the MPs driver's licence but later gave it back because of his MP immunity.

MP immunity is a much-discussed issue among members of parliament. Despite several efforts by the Justice Ministry to narrow its scope, Slovak MPs continue to reject the ministry's proposals.

The Justice Ministry will try once again to restrict immunity to statements made in parliament. It is currently preparing yet another proposal.

The incident involving Cuper made an impact on the ruling coalition parties. Following their November 15 meeting, the coalition agreed that MP immunity should not extend to traffic accidents while driving under the influence of alcohol.

"It hurt me to realize what the MP had done. Alcohol behind the wheel is unacceptable regardless of whether someone is a constitutional official or not," said Prime Minister Mikuláš Dzurinda after the meeting of the coalition council.

The parliamentary mandate and immunity committee should start preparing its draft proposal soon.

In Cuper's situation, a regular Slovak citizen would face a fine of up to Sk15,000 (€385), almost the average national monthly wage. The police could suspend his or her driver's licence for up to two years.

People perceive the privileges enjoyed by Slovak MPs as unjust. They generally feel that deputies abuse the immunity clause.

Cuper is not the only Slovak deputy to drive drunk, cause an accident and escape from penalty through deputy immunity.

Others include former MP Vlastimil Vicen in 1999, and Hungarian Coalition Party MP Pál Farkas in 2001.

Ironically, Cuper recently talked about alcohol abuse during a political discussion show with colleague Miklós Duray from the ruling Hungarian Coalition Party. The show was broadcast by the private television station TV Markíza.

"How many times have your colleagues come to parliament completely red as beetroots?" asked Duray.

According to police, 48,999 car accidents have taken place in Slovakia since the beginning of 2005, in which 448 people have died. Of the total number of accidents, drunk drivers caused 2,188. In these accidents, 28 people were killed.

According to the state-run TASR news agency, Cuper is taking legal action against Bratislava regional police spokeswoman Silvia Miháliková because of what he alleges as "disinformation" a day after the accident.

Cuper denies that he had two parts of alcohol per thousand of blood in his body, arguing that police eventually found only 0.8 parts per thousand.

Adding to his original confession given at the scene of the crash, he said that he had consumed two glasses of wine at two in the afternoon. By the time he got to his car, it was 10pm. According to TASR, the MP sees the case as an attempt to discredit him.

He insists that he swerved into the parked car to avoid hitting a third car, which was about to make an illegal turn.

The Slovak Association of Spokespersons called on Cuper to reconsider his plans to sue police spokeswoman Miháliková.