THE RAIN in Spain may stay mainly in the plain, but even the country's parched urban football grounds get a drop occasionally.
An unexpected cold shower in Madrid on November 12 - with the downpour moving to Bratislava for the return match four days later - extinguished Slovakia's hopes of qualifying for the 2006 World Cup of football in Germany. 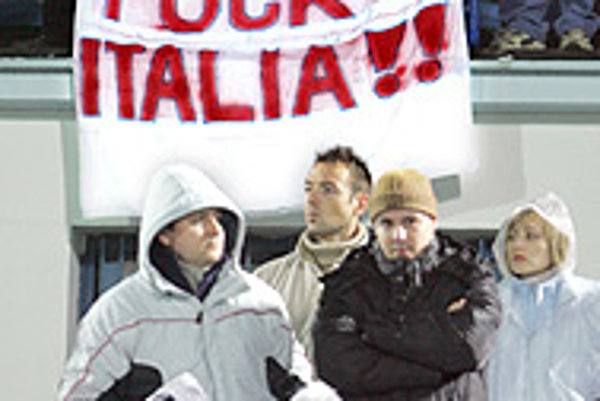 Font size:A-|A+0
THE RAIN in Spain may stay mainly in the plain, but even the country's parched urban football grounds get a drop occasionally.

An unexpected cold shower in Madrid on November 12 - with the downpour moving to Bratislava for the return match four days later - extinguished Slovakia's hopes of qualifying for the 2006 World Cup of football in Germany.

A brilliant first half of football from the talented Spaniards at home gave them a 2-0 lead at half time, and despite a Slovak goal by Szilárd Németh early in the second half, Spain cruised to a 5-1 victory on a penalty shot, the sending-off of Slovak defender Marián Had and coach Dušan Galis, and the collapse of the Slovak team's morale.

The return match in Bratislava on November 16 ended in a 1-1 draw, in which the Slovaks gave a far better account of themselves, but never looked as if they had it in them to win their playoff miniseries with Spain.

"Our guys played better today, and they deserved at least this draw," said Slovak assistant coach Ladislav Petráš, who was filling in for the suspended Galis. "We don't have such a strong and deep team as Spain does, and I think we can consider ourselves successful for just having reached the playoffs."

Before the opening kickoff in Madrid, no one on the Slovak team was patting themselves on the back for merely taking the field.

Slovakia had finished second in its group behind Portugal but ahead of Russia, and had drawn Spain as its opponent in a playoff round for the final three European spots at the World Cup. Galis said he would be happy with a 0-0 draw, and that he believed the Slovaks would get past Spain to qualify for Germany," even though it will be very hard".

But two goals by Luis Garcia in the 10th and 18th minutes - the second of which looked offside - knocked the wind out of the Slovaks, and only another seemingly crab decision by referee Massimo de Santis to disallow an apparent goal by Raul saved Slovakia from hitting the locker room 3-0 down.

Galis, who had objected to the referee's calling a corner that led to the first Spanish goal, blew his stack after an apparently offside Garcia cradled a cross on his chest and then knocked it home to put Spain up 2-0. He was sent off the field by de Santis, and had to sit out the return match as well.

"Spain had not been getting great results and wanted to avoid a tie in Madrid, and the referee helped them," said Galis after the game. "I was sent off and I did nothing to the assistant [referee]. I touched him very lightly and he theatrically threw himself to the ground. It was shameful."

Galis also criticized a penalty shot de Santis called in the 64th minute after Slovakia had closed the gap to 2-1. Defender Roman Kratochvil, slide-tackling an opponent in the penalty area, inadvertently touched the ball with his arm - an offence that is sometimes called, sometimes not.

As the Slovak players protested the call, the referee showed a yellow card to Marián Had, who had already been booked, resulting in his being sent off, and leaving Slovakia with 10 men to complete the last half-hour of play.

"If the best players are in the World Cup we should also have the best officials," stormed Galis. "I'm not disappointed at the result but at the way we lost. In all my time as a coach I've never seen anything like what happened in the first half. There was a foul at the start of the game that was never a foul, their first goal came from a corner that wasn't a corner, and their second was offside. When we scored to make it 2-1 we got back in the game, and they were almost immediately given a penalty.

"I'm very sorry to say Slovakia is a small country and we can't play against 12 men."

Slovak team captain Miroslav Karhan, who was also suspended for the November 16 game after picking up a booking, continued and even expanded on the protest.

"Fifa do not want us in the World Cup finals," he charged. "Spain have a lot more influence and will be a more prestigious participant at the World Cup. This is shameful and catastrophic."

But not everyone who saw the game agreed with the team members that the referee was the culprit, and the media in the days that followed were full of criticism of Slovakia's defensive play and level of psychological preparation.

"I'm really bothered by the pitiful way we lost," said Ján Kozák Sr., the coach of the FC Košice club. "Losing is one thing, but this disgraceful, chaotic and disorganized performance was another. The coach should have seen what was happening in the first 10 minutes and done something about it. It's naive to blame everything on the referee. Top players can't allow themselves to lose their concentration in such an important game, and they have to be prepared for anything."

Although the return match in Bratislava was a formality, over 23,000 fans braved the rain to watch their team play its last match in the qualifying stage for next year's World Cup.

Slovak substitute Filip Hološko broke a 0-0 stalemate in the 50th minute, intercepting Michel Salgado's attempted clear and snapping the ball past goalkeeper Iker Casillas. But Spain substitute David Villa tied it 21 minutes later on a counterattack to give Spain a 6-2 aggregate victory and send them to the World Cup finals for the eighth time in a row.

Other playoff matchups included Switzerland and Turkey, with the former going through on away goals, and Norway and the Czech Republic, where Slovakia's former federal partner advanced after two 1-0 victories.

"It's a real pity about the match in Madrid," said defender Martin Škrtel after the game. "Today we showed we can play with Spain. I think this team has a lot of potential, and it's got a very good combination of young talent and experienced players."