"WHEN we talk of the Holocaust today we have in mind the historical period when Jews and other ethnicities were killed. But we forget there are similar attempts directed on other religions, nations and other groups, also today," said Pavol Mešťan, director of the Museum of Jewish Culture in Bratislava. 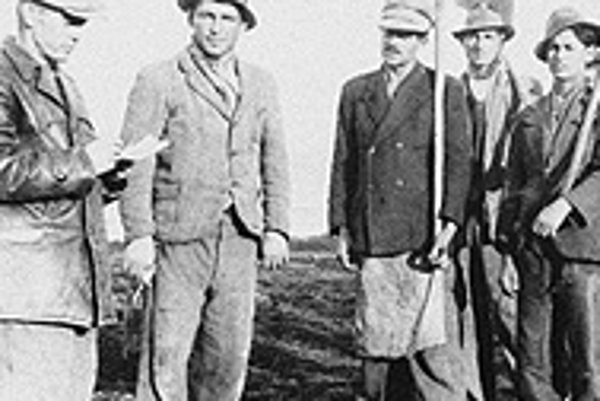 "WHEN we talk of the Holocaust today we have in mind the historical period when Jews and other ethnicities were killed. But we forget there are similar attempts directed on other religions, nations and other groups, also today," said Pavol Mešťan, director of the Museum of Jewish Culture in Bratislava.

He was speaking on November 9, when Slovakia mourned the death of the 21-year-old student killed by neo-Nazis and when the Jewish museum opened its doors to educate on the Roma Holocaust.

The Slovak Roma Holocaust 1939-1945 exposition in three languages, including English, is part of the Ma bisteren! (Don't Forget! in Roma) project aimed at reminding and educating on the horrors committed on the Roma population during World War II. Along with the educative role, the project also marks the locations connected with the Roma Holocaust with memorial plaques.

Housing the exhibition in the Jewish museum is more than just a symbolic gesture. Though the Holocaust was first of all directed at the Jewish population, the terrorizing genocide did not spare other ethnicities, including gypsies, as they were called at that time.

Several hundred Roma died during the Holocaust in Slovakia. Overall, up to half of the then Roma population in Europe was killed during WWII. Slovakia and Croatia were the only two nations who offered to pay to have each Jew deported to concentration camps, Mešťan says, and the same legislation used against Jews was enforced on the Roma.

Jews often bring attention to the fact that other ethnicities also died in concentration camps during the WWII Holocaust. But in general, ethnographers say, the Slovak public tends to associate the term with Jews. The Roma Holocaust is something that is new to them, an unknown landscape. Not only the general population but also the Roma themselves have an insufficient knowledge of the Roma Holocaust. Ma bisteren! is one of the few attempts in Slovakia lately to try to raise awareness of the historical facts.

"One of the reasons it's come so late are the Roma themselves, as they haven't attempted to make the subject more visible," said the cabinet plenipotentiary for Roma communities Klára Orgovánová, who understands the exhibition to be about Slovaks' mutual history. "It's about people who've been living on this territory for a long time, including Roma."

The number of victims might not be as important as was the suffering all these people went through and the serfdom they were subjected to. It was all based on principles of ethnic superiority, which was enough of an argument to enforce laws that resulted in the killing of millions.

For the Jews it also took time to spread the word, to build first memorials and then open expositions illustrating the WWII horrors. The first exposition in Slovakia, dedicated to the Jewish Holocaust, was opened in Nitra last September, 16 years after the collapse of Communism.

"Western Europe has been talking about the Holocaust for entire decades. Eastern Europe, including Slovakia, was quiet. This changed in the 1990s, when [Slovak] Jews who survived began to talk about the six million dead. They felt the need to share the horrors, to let them out. The Roma didn't have this need," said Mešťan, reminding us that the process of revealing this part of history is very slow in general. "But here is the beginning. And anything more we do in the matter would help a better understanding of the issue and better relationships with one another."

The Slovak Spectator (TSS): The Jewish Holocaust is mentioned quite often in Slovakia. Why has there been silence on the Roma suffering in the concentration camps?
Zuzana Kumanová (ZK): The theme was not paid enough attention after the war, internationally and on a Slovak scale. The 1930s brought pseudo-scientific racist theories and the Roma were identified as "asocials". If one follows the sources, there's evidence on how the term asocial was associated with the Roma. Such perception entered the society and when the war ended it wasn't easy to extract the true meaning of the term and notice that the measures against the Roma were taken on ethnic grounds and not because they were social parasites. Mixing the terms blinded society so much that after the war it wasn't easy to recognize that in concentration camps thousands of Roma also died.
In none of the trials in Nuremberg was anyone tried for crimes committed against the Roma, for the Roma genocide, though several cases reported on the many families killed because they were Roma. The breakthrough in the international arena came in the 1960s, with the endeavours of, among others, Simon Wiesenthal, a leading Nazi Hunter. He pointed out that there was another large group persecuted on the basis of ethnic origin in WWII. New facts emerged and the European historians began to delve into the issue. The word about it entered Slovakia. However, because of the Iron Curtain, it has not been that easy. Opinions on the development of the Roma tied to a process of assimilation rejected the fact that there were collective interventions against the Roma during WWII. In the 1970s and 1980s Czech historian Ctibor Nečas began to publish his works. There was no other historian who devoted so much time to the Roma issue and without whose work we could not have this exhibition. However, his works were banned at that time in Slovakia. In 1989 the situation changed. There are historians who devote themselves to the theme, though one can still count them on the fingers of one hand.

TSS: How does Slovak society cope with this history?
ZK: Slovak society in general does not cope well with what happened during WWII and therefore there's not [a lot of] interest in being reminded of these happenings. We looked at the chronicles of the localities in which Roma were killed but you won't find any evidence in them. It proves that if a Roma group wanted to return to this municipality they had to quickly forget who belonged to Hlinka Guard and who took part in pogroms.

TSS: It's been 60 years since the war and new materials on the issue of the Roma have emerged. The exhibition shows a detention camp in Dubnica nad Váhom, which the public seems to know nothing about.
ZK: That's true.

TSS: Do the Roma know?
ZK: With the Roma it's a bit more complicated. Today's ordinary Roma don't know the exact facts. There is though a sort of collective memory at work, and stories of the horrors are passed from generation to generation. Some Roma, however, don't want to talk about it at all.
Maybe in this particular historical fact one can find their aversion to report on their Roma ethnicity. The Holocaust didn't appear as if they threw them all in one room and killed them. It developed over years - first from pogroms and then being sent to work and detention camps. Therefore today, during a census, a resemblance with the event might be evoked.

TSS: Can the exhibition somehow help the relationship between the majority and minority?
ZK: I think so. It's a theme with a great deal of room for empathy. It can help find the way for understanding.
Moreover, it's modern history around which they can unify and that can have great significance for the ethno-emancipation process of the Roma.