One World makes you care

ON THE SAME day that Slovakia mourned the death of a student brutally killed by a band of skinheads, the One World festival opened in Bratislava. The November 9 event, started by People in Peril's director Andrej Bán, is designed to raise awareness on ethnic conflicts and human rights violations in countries far away. 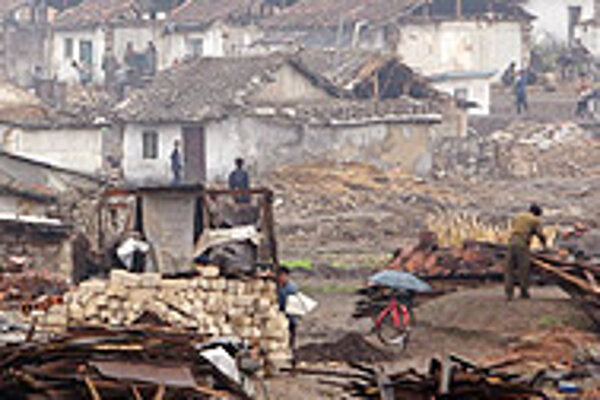 Font size:A-|A+0
ON THE SAME day that Slovakia mourned the death of a student brutally killed by a band of skinheads, the One World festival opened in Bratislava. The November 9 event, started by People in Peril's director Andrej Bán, is designed to raise awareness on ethnic conflicts and human rights violations in countries far away.

"Slovakia has its Africa, its Middle East right on the right bank of the Danube," Bán said on opening night, referring to the place where Daniel Tupý was murdered.

Tupý was killed by extremists for being "different". He wore his hair long and carried a guitar slung over his shoulder. And it bothered someone.

One World brings stories like this to the screen. Horrifying fates of innocent, ordinary people destroyed by extreme ideologies. Potentials unachieved because of political games. Lives ended by "natural" catastrophes. One World is the narrative of people in front of the camera, and those behind it.

The festival's 6th year concluded on November 13. It screened 53 documentaries, on subjects ranging from the recent tsunami calamity, ongoing events in Iraq, Afghanistan and Chechnya, and the narratives of refugees who have fled autocratic regimes and war zones. It showed how Bosnia and Herzegovina coped with the massacre of 8,000 Bosnian Muslims that took place 10 years ago, how women fight the fortresses of ancient traditions and why the wardress of Abu Ghraib, shown on pictures with American soldiers abusing Iraqi prisoners, feels no responsibility.

A film from BBC documentary filmmaker Ewa Ewart, This World: Access to Evil, opened the festival. It allowed the Bratislava audience to hear the voices of prisoners who escaped Communist North Korea, told through the scars on their bodies.

Ewart's second film at the festival, Children of Beslan, brought into focus the young victims of the siege of the Russian school by Chechen separatists in September 2004, when 186 children were killed. The documentary by Swiss journalist and film director Eric Bergkraut, COCA: The Dove of Chechnya, showed the killing that takes place on the other side of the conflict, in Chechnya.

Both films are powerful testimonies of the innocent. Ewart's is a mind-blowing account of the children's memories and their cold view of a future shaken by the three-day terrorist drama. Bergkraut follows Zainap Gashaeva, who has been collecting stories of those killed and bringing those afflicted to the West for seven years.

The films contrast with what is offered by the news media, which are often the tales told by Russian officials, as independent journalists have no access to Chechnya. The documentaries show what political battles inflict on ordinary people. They illustrate the vicious circle of the Chechen conflict and question our definition of "terrorist" through the story of a woman who, having lost her family, decides to take revenge on their murderer.

Irena Brežná, a Slovak writer living in Switzerland, who brought activist Gashaeva and filmmaker Bergkraut together, says she is appalled at the indifference Western politicians show to the issue in general. It is striking that even countries like Slovakia, who should better understand the Chechen conflict given its Communist history, turn a blind eye.

"A film might not change the situation in Chechnya but it can contribute to a change in public opinion and the uncovering of the truth," says Gashaeva.