Because her boyfriend brutally beat her, she thought of ending the relationship. He threatened to kill her. He said he would suffocate her, cut her into pieces, grind her in a mill and nobody would find her. She believed his threats and was frightened. 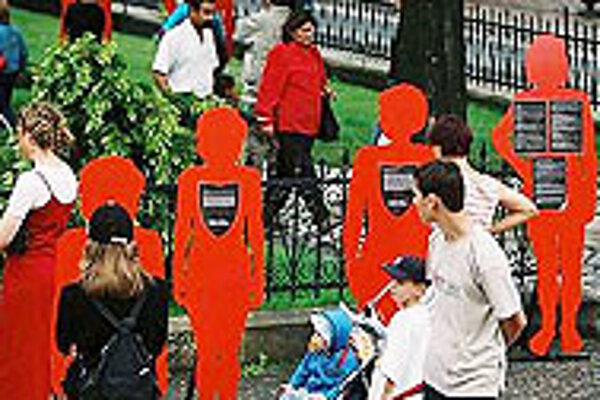 Font size:A-|A+0
Because her boyfriend brutally beat her, she thought of ending the relationship. He threatened to kill her. He said he would suffocate her, cut her into pieces, grind her in a mill and nobody would find her. She believed his threats and was frightened. In the final days before she died she stopped going out of the house alone. Her parents and schoolmates accompanied her everywhere. Nevertheless, he found her. He killed her and locked her naked in a wardrobe. In court he claimed that everything he did he did for her and that she wanted it so. The court senate sentenced him to 23 years in a top security prison.

This story was one of more than a dozen similar accounts told at Bratislava's Aupark shopping centre from November 25 to 27. Fifteen red, life-sized figurines stood in for the victims of male violence in Slovakia.

Entitled Silenced Witnesses, the figurines are the work of a group of American artists from Minnesota. They created them in the shape of an anonymous woman's silhouette in 1991. Since then, the project has been touring the world and spreading the word. It first entered Slovakia in 2004, coming to the eastern city of Košice. A year later, on November 25, which is also the International Day Against Violence Committed on Women, it returned to Slovakia again. This time it came to inform the citizens of the country's capital, Bratislava. Through the real stories of women beaten, tortured and killed by their spouses, prepared by the Slovak NGO Fenestra, the project calls for attention to be given to the kind of violence that often takes place behind closed doors. It teaches the public not to ignore problems happening in family circles or with their neighbours. It also educates about the psychological and physical effects that long-term violent abuse has on victims.

"Violence committed against women is a serious social problem in Slovakia," states the conclusion of a recent study by the Institute for Public Affairs (IVO).

The IVO study says violence against women in Slovakia is caused by myths about roles within the family, nourished by traditional gender stereotypes of masculinity and femininity. The report advocates treating the problem of gender inequality as one of the obstacles to the development of real democracy in the country.

The research results reveal that women are exposed to violence at various periods from childhood through adulthood. Girls and women face violence at school, work, among friends, in public and at home in the family or with a partner. Violence against women takes place irrespective of level of education, socio-economic status, ethnicity, religion or place of residence. It can be in various forms, including mental, physical, sexual and economic.

The study revealed that a significant number of women in Slovakia face violence from their partners (25 percent of Slovak women in couples). Up to 11 percent suffer battering, which is often long term. It mostly takes place in a marriage with children; 85 percent of monitored cases prove so.

Eighty eight percent of Slovakia's adult citizens consider violent behaviour against women by their partners to be a serious problem, and 80 percent say outside intervention, or the help of institutions, is necessary to help solve it. The rest, around 20 percent, think it is a private issue within the family and it is up to those directly concerned to find a solution.

A dozen non-governmental organizations in Slovakia deal with the issue. They help to break the social taboo against addressing the problem and introduce education that stops supporting gender stereotypes. The NGOs are active in enforcing particular laws and commenting on existing legislation.

Last year the Slovak government approved a National Strategy for Preventing and Removing Violence Committed against Women and in Families and this year it agreed to an Action Plan tied to the strategy. The non-governmental institutions criticized both initiatives - the first for its too general character, the second for not having specific budget sources and personnel.

Slovakia still needs to assure that all witnesses and victims of male violence have access to services, the study says, so that they know how to react. This means the country needs to create safe accommodation facilities for battered women and give more support to existing services. At the same time it is necessary to raise the level of education and training for professionals in the field and introduce means for the early disclosure and stopping of violence.

To a large extent the results of the study show that what happens behind closed doors cannot be separated from wider social issues. "Only with the involvement of us all," the NGOs say, will the public stop hearing tragic stories about the murders of young girls and mothers killed by their spouses in front of their children's eyes.