THE POLISH Institute in Bratislava is probably the oldest foreign cultural institute in Slovakia. It was established in 1950, long before an independent Slovakia was created. First called New Poland, then the Polish Information and Cultural Centre, in 1994 the institute took on its current identity. 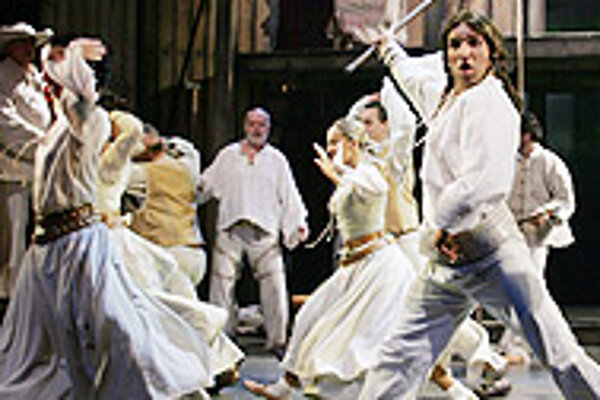 Font size:A-|A+0
THE POLISH Institute in Bratislava is probably the oldest foreign cultural institute in Slovakia. It was established in 1950, long before an independent Slovakia was created. First called New Poland, then the Polish Information and Cultural Centre, in 1994 the institute took on its current identity.

According to Kronhold the institute works to make Slovaks aware of significant personalities in modern Poland: politicians, philosophers, artists, writers, film directors, scientists and even priests. "We are trying to show Slovaks the life of Poland," Kronhold said.

One of the biggest events this year, said Kronhold, was the visit of Lech Walesa, legendary leader of the Solidarnosc (Solidarity) movement, which was instrumental in the overthrow of Communism in Poland.

"Walesa has a very busy programme but we succeeded in bringing him to Slovakia, which we are very happy about. And we saw that it attracted the attention of Slovak politicians and journalists," Kronhold recalled.

Also this year, Ernest Bryll, the composer of Na skle maľované (Painted on Glass) visited Slovakia. Na skle maľované is one of the most popular musicals in Slovakia. It celebrates the life of outlaw Juraj Jánošík, a Slovak national hero who lived at the turn of 17th and 18th centuries. Jánošík was born in northern Slovakia, near the Polish border, and is known in both countries, although he is far better known to Slovaks. This is also true of the musical, which has broken box office records at Slovak theatres.

In November, the Polish Institute organized a memorial day for one of the greatest Polish poets, Adam Mickiewicz. At the end of November, the cultural centre hosted a discussion with well-known Polish feminist, Kazimiera Szczuka.

"I am trying to invite not only househould names but also young talents to Slovakia. There were, for example, young poets Anieszka Kuciak and Jacek Dehnel within the international festival of poetry, Ars Poetica," Kronhold added.

Apart from bringing Polish culture to Slovakia, the institute also tries to return the favour by opening doors to Slovak culture in Poland. It works very closely with a Slovak institute in Warsaw.

"I think we still have a lot to do. Although our languages and cultures are close, we do not know each other well enough. But it is getting better. I was surprised at how much information has increased on Slovakia in the last five years. There are, for example, a huge number of guidebooks on Slovakia in Poland now," Kronhold said.

Each year the Polish Institute organizes Polish language courses, attracting from 50 to 60 students. Apart from that, Polish language is also taught at Comenius University in Bratislava and in Banská Bystrica students can even take a degree in Polish studies. In turn, Jagello University in Krakow has 150 students studying Slovak language every year.

"Slovakia has become interesting in Poland. Just imagine, recently, Michal Jagiello, the director of the National Library in Warsaw, wrote a thick two-volume book called Slovaks Through the Eyes of Poles. It is a great event in Poland. Next year, we want to organize a discussion panel on that book," Kronhold said.

The Polish Institute closely cooperates with the Society of Poles and Their Friends in Bratislava, Martin, and Košice.

Exhibitions are the main activities at the Polish Institute. Every year, they draw around 5,000 visitors. Apart from that the institute organizes video screenings of Polish documentary and feature films, concerts, talks with artists, scientists, poetry readings, and meetings for translators of Polish poetry and prose. Annually, the institute organizes 60 to 70 such events with around 2,500 visitors.

Those interested in Polish literature and current affairs can use the library in the Polish Institute, which houses around 7,000 books and 60 newspapers.