WRITING Japanese script with a brush and ink is an art in itself. A few steps up from that is calligraphic painting, or Suiboku-ga, which uses the contrast between dark ink and the brightness of paper to great effect. 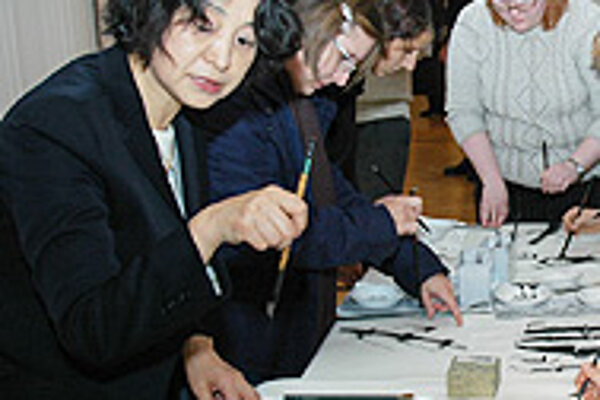 Font size:A-|A+0
WRITING Japanese script with a brush and ink is an art in itself. A few steps up from that is calligraphic painting, or Suiboku-ga, which uses the contrast between dark ink and the brightness of paper to great effect.

Visitors to Bratislava's City Museum on November 25 had the chance to try the Asian art out themselves. Artist Kinsui Katori came to demonstrate it within the Festival of Japanese Art.

Calligraphic painting is different from "western" style painting that covers the entire surface and leaves no white spaces. The painting of the country of the rising sun finds harmony in a combination of paper, ink and water.

Depending on how strong or how light the individual strokes are made on the paper, a belief is nourished that ink can substitute for any colour.

With several precisely aimed and purposefully executed brush-strokes Katori finished a painting in seconds. But to vividly paint objects convincingly in a few shaded strokes at such speed requires practice and great visual ability.

"It takes around one year for a person to learn the brush strokes," explained Katori, warning "once you put ink on the paper, it cannot be erased".

The finished painting is then stamped twice. The first time with the artist's name and then with a symbol that describes the mood of the painting, e.g. peacefulness or clarity.

Though the ink Katori painted with appeared black, it was in fact blue. "There are two kinds of ink - bluish and

brownish. The blue one is made of rapeseeds and the brown from burning pine branches. When laid thickly on paper, they look black," she said.

The artist is president of the Bokuga Association, which brings together international artists painting with ink and spreads Suiboku-ga worldwide. This was the first time the group had come to demonstrate the art in Slovakia. Suiboku-ga paintings, along with Japanese sign lettering and traditional Kutani ceramics characterized by miniature motifs, are on display at the Bratislava's City Museum until January 8.

"I believe that this exhibition will increase the interest in Japan and its culture as well as help to strengthen the mutual friendship," said Katori.