Teenage angst has paid off well

IT'S obvious by now that the Harry Potter movies are a cultural force just as potent as the literary series that they're based on. With the unprecedented success of JK Rowling's books, these films have a substantial built-in audience. Many of the movies' fans, of course, have never read one of Rowling's words. 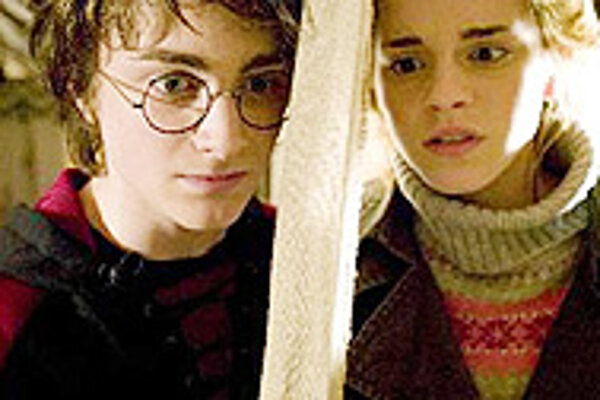 Harry Potter and the Goblet of Fire

IT'S obvious by now that the Harry Potter movies are a cultural force just as potent as the literary series that they're based on. With the unprecedented success of JK Rowling's books, these films have a substantial built-in audience. Many of the movies' fans, of course, have never read one of Rowling's words. This creates a significant divide between the audiences that the Harry Potter filmmakers need to please.

Potter diehards will complain about important story arcs that the movies leave out, while those who only see the movies will be confused by diversionary plot points thrown in to appease the devoted. The first two Harry Potter movies, directed by Hollywood journeyman Chris Columbus, stayed true to the books to their detriment; though enjoyable, they failed to develop much of their own identity.

With the third movie, Y Tu Mama Tambien director Alfonso Cuaron experimented a bit more, creating a darker, funnier, more beautiful world that easily outshone its predecessors. There were a couple of throwaway scenes, however, that produced little beyond nods of acknowledgement from those that had read the book. But finally, it seemed like Harry was growing up, taking those tentative first steps into the awkward and frightening world of being a teen.

Now, with the fourth film, Harry Potter and the Goblet of Fire, the awkwardness steps even further into the forefront. The result is the wittiest, most fluid instalment of the franchise thus far. Though it never equals any of the scenes of sheer beauty that made Cuaron's movie so great, Goblet compensates by making Harry's trials more real and human than ever.

Veteran British director Mike Newell focuses less on the wizardry and supernatural doom (though he certainly covers these things convincingly) and more on the raging hormones of his teenage heroes. As Harry, Daniel Radcliffe seems increasingly more comfortable at being uncomfortable. Rupert Grint and Emma Watson, respectively, as Harry's friends Ron and Hermione again show themselves to be uniquely gifted and funny actors.

Some fans have complained that the movie removes too much from the book, but as a stand-alone work it works perfectly - at two and a half hours, a fairly long story with no excess. As always, the film boasts some of the greatest actors from the UK and Ireland; welcome additions are Brendan Gleeson, Ralph Fiennes and Miranda Richardson in a small scene-stealing role.

With each movie the obstacles Harry must overcome become greater and more menacing. As he enters a highly competitive wizard tournament in Goblet, the pressure seems almost overpowering and, by the end, extremely dangerous.

But thankfully, Newell recognizes that these great tests are every bit as difficult as those of simply growing up.