SLOVAKIA's Finance Minister Ivan Mikloš opened the December 7 session on one of the most important laws that the Slovak parliament has to pass this year: next year's budget. 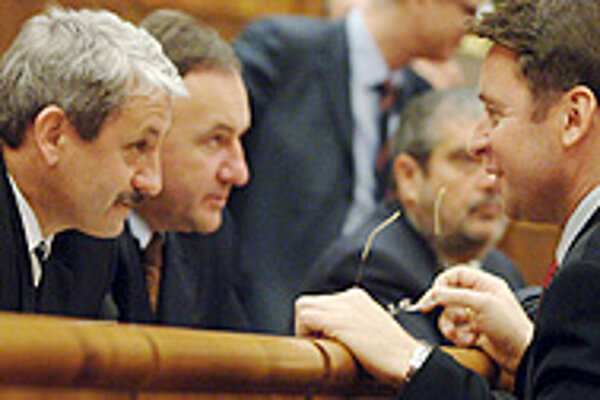 Font size:A-|A+0
SLOVAKIA's Finance Minister Ivan Mikloš opened the December 7 session on one of the most important laws that the Slovak parliament has to pass this year: next year's budget.

The draft budget is "good", according to the finance minister.

Pushing the state budget through parliament when the government does not have a safe majority appears a Herculean task. However, Mikloš, the father of the budget proposal, is optimistic.

"It ensures high and sustainable economic growth, which is the precondition for growth in employment and a rise in living standards," Mikloš told the parliament when opening the discussions.

Slovakia's opposition parties signalled ahead of the discussion that they would not support the cabinet-approved budget. The ruling parties, which have only 68 MPs in parliament, thus have to count on the support of independent members of parliament to pass the draft legislation into law.

The Slovak media reported before the parliamentary session that around 77 MPs would support the finance minister's proposed budget. In light of a current investigation into possible parliamentary corruption, speculation emerged as to whether the government would attempt to "buy" the support of independent MPs.

Minister Mikloš insisted that he would not accept any changes to the budget that would lead to an increase in the budget deficit.

As expected, the opposition party Smer announced that it would not support the draft budget, followed by the Slovak Communist Party (KSS) and the Movement for a Democratic Slovakia (HZDS).

Smer's shadow finance minister, Igor Šulaj, said that his party rejected the budget draft as a whole because it was "based on the current government's reforms, which have a negative impact on low-income citizens".

He maintains that the budget generates public debt that future generations will have to pay for.

According to HZDS MP Milan Cagala, his party would support "all proposals that will improve the budget and increase the living standards" of Slovaks, but would not vote for the budget as a whole. The KSS indicated a similar stance.

The opposition also expressed support for Slovak farmers, who are demanding that the proposed state budget include subsidies comparable to their peers in neighbouring states.

Slovaks farmers took their protests to parliament on December 7 to show their disagreement with the cabinet-proposed subsidies.

"We principally disagree with the proposed level of subsidies," Ivan Oravec, the head of the agricultural and food chamber, told the SITA news agency.

According to farmers, the low subsidies put them at a disadvantage when competing with their neighbours, let alone developed EU member states.

HZDS' MP Tibor Cabaj proposed that farm subsidies should reach 65 percent of the EU15 average, representing a Sk1.5 billion (€40 billion) increase. According to Cabaj, this should be covered by either increasing the budget deficit or by tapping into the cabinet reserve.

Prior to starting the discussion on the next year's budget, MPs smoothly approved a series of revisions to other laws necessary to fulfil 2006 budget revenues.

The changes included increasing court fees and the fees for issuing documents, such as IDs and driving licenses, as well as higher fees for business registration and business registry change fees.

MPs also approved reducing the state premium in the building savings scheme as of next year, saving another Sk650 million (€171.1 million).

A total of 32 MPs were scheduled to give speeches on behalf of the draft budget proposal. Speaker of Parliament Pavol Hrušovský proposed that if the discussion did not conclude by Friday, December 9, the final vote would be held the coming week.