Direct from plane to gondola

IMAGINE sitting on a ski lift surrounded by alpine terrain just 40 minutes after landing at an international airport.
The High Tatras may be one of the few places in the world where this is possible. 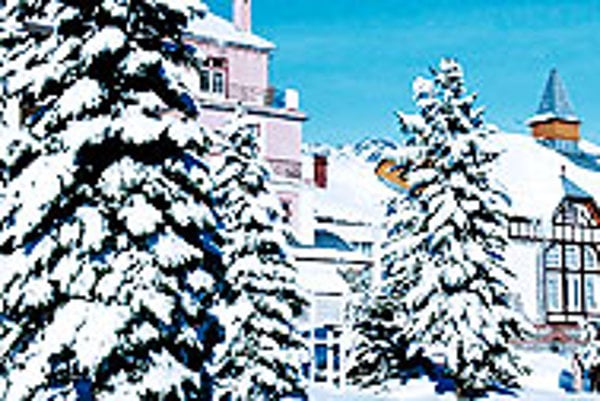 Font size:A-|A+0
IMAGINE sitting on a ski lift surrounded by alpine terrain just 40 minutes after landing at an international airport.

The High Tatras may be one of the few places in the world where this is possible. A mixture of favourable geographic conditions and basic infrastructure provide the necessary ingredients to create the dream. There is only one problem: the standard of services in Slovakia's mountains are too crude to lure the jet setting clientele.

J&T's plans are ambitious. They include modernizing the areas slopes, updating the lifts and cableways and refurbishing the hotels. They also want to establish Slovakia's first five-star hotel. In total, J&T wants to pour almost Sk5 billion (€130 million) into the High Tatras.

"From a natural beauty standpoint, the Tatras are definitely the best we have. But they simply lack high quality services," Maroš Sýkora, J&T's spokesman, told The Slovak Spectator. The goal, says Sýkora, is to bring quality services to the Tatras.

One of the main investment decisions of the financial group is to transform the old turn of the century hotel, the Hviezdoslav in Štrbské Pleso into the first five-star hotel in Slovakia. After a Sk1 billion (€30 million) face lift, the Hviezdoslav will be transformed into the Grandhotel Kempinski High Tatras.

Apart from the Hviezdoslav, J&T intends to reconstruct the healing house Helios in Štrbské Pleso. J&T also owns the Solisko in the town.

J&T's project in Tatranská Lomnica is primarily aimed at modernizing the ski facilities. "Our partner in this project is Andreas Wenzel, a former Olympic medallist, and a winner of the 1980 World Cup," said Sýkora. Wenzel has participated in the reconstruction of several ski resorts.

The plan is to replace old lifts and reconstruct the slopes so that skiers can ski from Lomnické sedlo through Skalnaté pleso down to Tatranská Lomnica via the ski resort of Jamy.

The investor also intends to build a new cableway station in Tatranská Lomnica. The old one, designed by famous Slovak architect Dušan Jurkovič and housed in a historical building, will likely be turned into a museum.

The company also wants to transform the historical Grandhotel Praha in Tatranská Lomnica into a ski-in, ski-out hotel. J&T's modernization plans for the High Tatras include the establishment of additional services - restaurants, ski rentals, shops, boutiques, etcetera - that designate a ski resort as an international destination.

J&T wants to create a strong brand for the Tatras. To achieve this, one of its goals is to hold winter top international sports competitions, such as the World Cup, at its resorts.

The company admits that commercial development in the High Tatras is a sensitive issue. "It is crucial to determine the potential burden that development would put on the High Tatras. It is necessary to define the limits of development, beyond which nature would suffer," said Sýkora.

New legislation pertaining to development in the Tatras National Park should help determine the future of the mountains. It should at least establish zones with various grades of protection. "Clear zones would set the same conditions for everyone. It would definitely help attract further investments," Sýkora said.

J&T says its goal is not to attract as many visitors as possible to the Tatras, since it believes mass tourism would destroy the alpine beauty. Rather, J&T wants to attract a certain calibre of clientele.

"The Tatras will never compete with the Alps, where ski slopes are everywhere and the scale of the mountains can cope with crowds of people. The Tatras have completely different dimensions. The way we should go about this is to attract less people, but those who can spend more money. That is why luxury services and a top-notch airport are so important," Sýkora concluded.

What does the national park say?

The Slovak Spectator asked Tomáš Vančura, the director of the Tatras National Park, what he thinks about J&T's large investments.
"I really have nothing against the hotel reconstruction. For example, the Hviezdoslav has been neglected for more than 10 years. It is good that it will regain its taste of luxury," said Vančura.
The director, however, expressed concern about restructuring ski slopes and updating lifts and cableways, since those may directly impact the environment. "The crucial issue is the capacity of the new facilities." The director thinks the Tatras are too small to accommodate any more people.
Vančura is also wary of J&T's desire to reconstruct the ski slopes on places that were previously used for skiing but today are under the highest protection. "We know the areas used to be ski slopes but now we are in the national park. Well, everything is a matter of discussion and I believe we will find a rational solution."