THEY WUZ robbed.
Not by their opponents. Not by fate. But by their own football pitch, which under a December downpour turned into a swamp that smothered every chance that Artmedia Bratislava had of defeating Porto in the last game of the Champions League group round and advancing to the knockout phase. 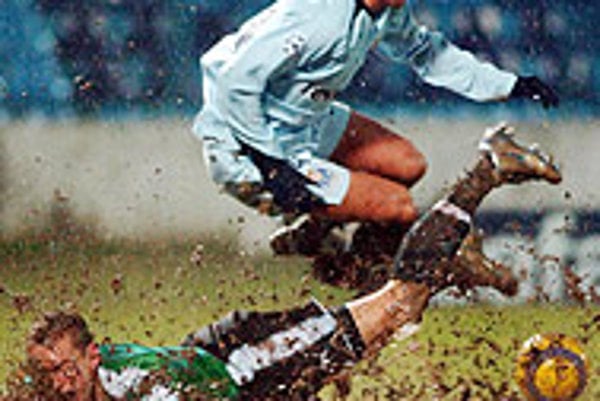 Not by their opponents. Not by fate. But by their own football pitch, which under a December downpour turned into a swamp that smothered every chance that Artmedia Bratislava had of defeating Porto in the last game of the Champions League group round and advancing to the knockout phase.

With Glasgow Rangers drawing 1-1 at home with Inter Milan in the other Group H match, the Scottish side finished one point clear of Artmedia, and advances to the next round with the group winners from Italy. Artmedia, as the third-place finisher, will now play in the UEFA Cup tournament next spring, while Porto - the 2004 Champions League winner - went home empty-handed.

"We were better at every position," said Artmedia midfielder Ján Kozák following the exhausting 0-0 draw on December 6 in Bratislava. "After a balanced first half, we were far better than they were. We played our hearts out, but we just lacked that extra bit of luck to get a goal."

Even "luck" would have had trouble dealing with the sloppy Tehelné pole pitch and atrocious weather last Tuesday night. The field quickly became rutted with uprooted turf, and pools of mud collected in the areas of heaviest traffic, requiring brute force to dribble through, taking the pace off every pass, and reducing play to a comedy of slips and slides.

The Slovaks seemed to handle the conditions better, being more used to them, but Porto was completely thrown off their skill game, and seemed not to know how to respond. In perhaps the most agonizing moment of play for the Bratislava squad, a pass went towards unmarked substitute Blažej Vaščák inside the six-yard line, and after half a dozen solid chances, a Slovak goal seemed certain. But the ball stuck in the deep mud in front of the goal and never reached Vaščák, and keeper Vitor Baía managed to push it away.

Vaščák had also been thwarted earlier when he was rugby-tackled inside the box by the Porto defender Pepe after having beaten Baía, and again the ball was cleared off the sopping goal line.

"The terrain was difficult for everyone," said Vaščák. "The ball kept getting stuck in the mud, and that's what happened to me with my chance at the end. Really, I never played in such muddy conditions in my life."

A desperate tackle by Porto's Jose Bosingwa on Branislav Obžera with seven minutes remaining gave the Slovaks a free kick near the 18-yard line, but a curling ball was headed wide by Branislav Fodrek from close range after he appeared to slip. For Artmedia, whose annual budget of about €1.5 million is less than the salaries of some individual players they have faced, the result of the match, and of the group round as a whole, represent a triumph. The team was given no chance of advancing before the round began, and at one point was a 2,500:1 outsider to win the competition.

But a 3-2 victory away at Porto, and two draws against Rangers, put them on the brink of advancing in Bratislava. Their failure to put in any of their tantalizing second-half chances against Porto left many players with a bitter-sweet feeling.

"We could have been among the top 16 European clubs," said Vaščák. "But then again, the UEFA Cup is nothing to sneeze at. It's great we'll still be playing in Europe in the spring, because no Slovak club has managed to accomplish that in the modern era." The last Slovak club to qualify for UEFA Cup play was Spartak Trnava in 1974.