INTERNATIONAL Bluegrass Music Association (IBMA) honoured the Dopyera brothers, the Slovak born inventors of the resophonic guitar, the dobro, with the Distinguished Achievement Award at the World of Bluegrass Business Conference in Nashville, Tennessee, on October 27. 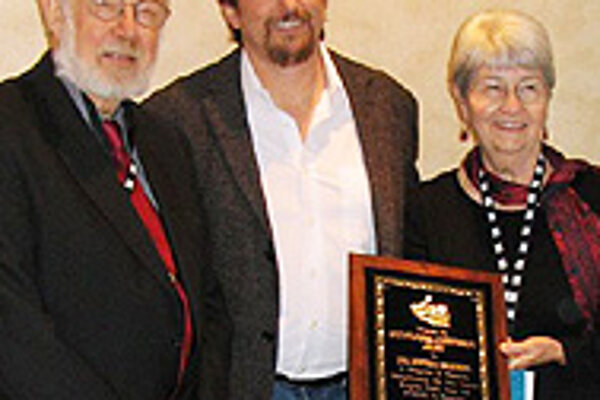 Font size:A-|A+0
INTERNATIONAL Bluegrass Music Association (IBMA) honoured the Dopyera brothers, the Slovak born inventors of the resophonic guitar, the dobro, with the Distinguished Achievement Award at the World of Bluegrass Business Conference in Nashville, Tennessee, on October 27.

The award is one of the association's highest honours and recognizes those who have fostered bluegrass music with deve-lopments that broaden the music's recognition and accessibility.

Jerry Douglas, the world's famous dobro player, gave a speech. Old family pictures of the Dopyeras were projected onto a screen and bluegrass band Fragment represented Slovakia on the occasion.

Born in Slovakia, Rudy and John Dopyera were musical instrument makers. Their father Jozef Dopyera was a miller in the village of Dolná Krupá near Trnava. The family, including 10 children, was part of the wave of Eastern European immigrants that went to the US in the early part of the 20th century. They arrived in the US in 1908 and settled in California. They were engineers, tinkerers, businessmen and musicians.

The family had a history of violin making going back centuries and Rudy was an exceptionally talented and soulful gypsy-style violinist. In 1926 John patented his resophonic steel body guitar with three aluminium resonators called the "tricone". With his brothers Rudy and Emil and other investors they founded the National String Instruments Company. Later, in 1929 they split and formed another company named Dopyera Brothers.

The company's logo was "Dobro means good in any language". They also made wooden body resophonic guitars, mandolins, ukuleles and tenor guitars with one metal resonator "single cone" under the brand name Dobro. They combined Old World skills and traditions with the booming technology and futuristic tastes prevalent in art in pre-world War II America. The National String and Dopyera Brothers companies merged in 1934, bringing the Dopyeras and their resonator guitars full circle. The dobro became an integral part of the world of music.

Douglas, who is known as the "Dobro King", was recently proclaimed Musician of the Year 2005, by the Country Music Association at a ceremony in New York. He has also won the Dobro Player of the Year, awarded by IBMA, eight times.

Dobro musicians annually meet in Trnava for the Dobrofest. Douglas was one of the guests at the festival. There is also a dobro museum in Trnava, which displays a collection of instruments designed by the Dopyera brothers.