Lard to eat, lard to drink

"IT'S my first time visiting a market like this. I have never been to anything similar. I find it very nice," says 30-year-old Simon from London as he searches for souvenirs at Bratislava's Christmas market, which opened November 25 and runs until December 23. 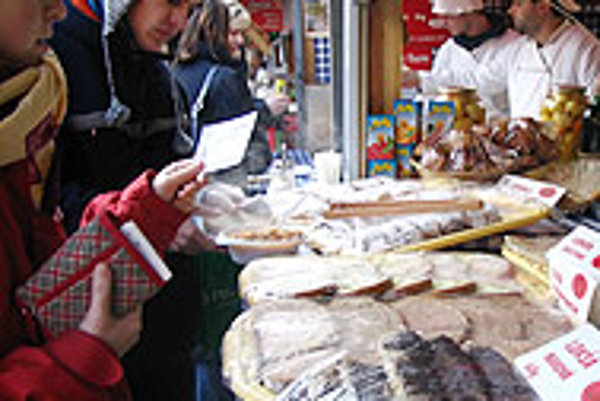 Font size:A-|A+0
"IT'S my first time visiting a market like this. I have never been to anything similar. I find it very nice," says 30-year-old Simon from London as he searches for souvenirs at Bratislava's Christmas market, which opened November 25 and runs until December 23.

More than 90 wooden booths sell goods of all kinds. There are handicraft products, decorative goods and esoteric temptations. But it is always the stands selling traditional food and drinks to feed and warm the visitors coming to shop, chat and have fun that dominate at the market.

Among the smells of cigánska pečienka (roasted pork in roll), pečená klobása (roasted sausage), kapustnica (cabbage soup), medovina honey drinks and mulled wines it is the chlieb s masťou a cibuľou (bread with lard and onion) that receives mixed reactions.

It is something that visitors tend to either love or hate.

"I can't miss out on bread with fat and onion when I am here. It reminds me of childhood when my grandmother used to make it for us during the holidays," says Kristína, 20. Mária, 77, cannot miss it either. "I love it. We used to bring it to school for breakfast. And my mother used to say that onion cures seven illnesses," she says.

On the other hand, teenagers Lucia and Petra would not touch it. "We've tried everything at the market except this. Eat onion in public? No way," says Lucia, giggling.

Stall keeper Juraj, 24, says that he sells it because people want it. "It's traditional, a sort of a Slovak speciality, and it's delicious. Tourists buy it, too. It's cheap and they want to try something typical."

Juraj explains that for most of Slovakia's neighbours, Czechs, Poles, Hungarians and Austrians, it is nothing new, but some tourists are seeing it for the first time in their lives. Canadian visitor Steve, 23, was rather surprised when he heard of it. "Is that raw onion? I couldn't guess what it was!"

Not as common, but also offered at the market, is bread with meat scraps (oškvarková nátierka). Little Martinko and Barborka said they loved it, because their mum never makes it at home. They also liked lokše (potato pancakes) that Milan, 46, was selling at his stand.

Milan says that he has seen the market change its face every year. "Ten years ago, Japanese tourists would rush through like a militia, stopping nowhere. Now they enjoy the market, they take their time and often buy something. And if not, they definitely take a picture of us," he says, smiling.

Seung, 35, from South Korea, thinks the food and drinks unbelievable. "We don't eat anything special at Christmas. I usually go to a restaurant with family and have a steak." However, he would not eat anything at the market. Chinese tourists were braver: "We've eaten some hamburgers," said Eric and Min Ho, in their late 20s, as they pointed at cigánska pečienka.

Though the markets also offer various traditional drinks, such as the peculiar hriatô (strong spirit mixed with water, caramel, lard and spices, served hot) and the most popular, mulled wine, Australians Emily and Kate could not wait to leave them and try the local beer.