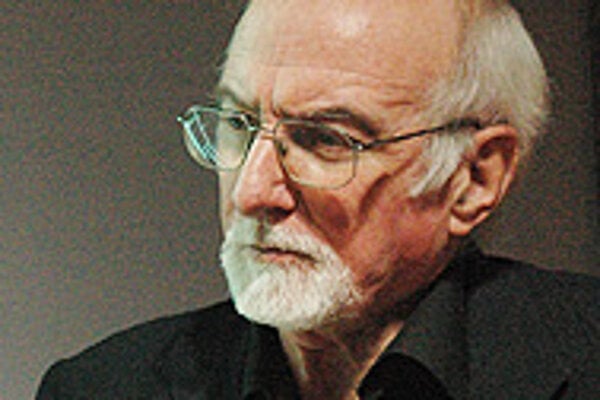 Font size:A-|A+0
THE SECOND day of International Film Festival (MFF) Bratislava, December 3, was dedicated to British cinema and prominent UK guests. In recognition of Britain's presidency of the European Union, the festival organizers let the Slovak audience become more familiar with British films. Moreover, they reserved one entire section of the festival's programme, I Love UK, for these movies.

British film legend and human rights campaigner Vanessa Redgrave was the star attraction. Though she left drama school in 1956 to help refugees and has continued to help war victims around the world, she has starred in more than 100 film and theatre roles and won many important awards.

Redgrave is one of the rare actors who has achieved the so-called actors' Triple Crown, having won an Oscar for Julia, an Emmy for the TV film If These Walls Could Talk, and a Tony award for her Broadway stage performance in Eugene O'Niell's Long Day's Journey Into Night. The festival acknowledged Redgrave's "unique artistic contribution" by awarding her the Bratislava MFF Special Award.

"We are immensely honoured that we have been able to invite this unique, charismatic personality to MFF Bratislava," said programme director Peter Nágel, who included her latest film, The Fever, in the festival's competitive section. In this strongly personal account, based on the play by Wallace Shawn, an English woman torments herself by trying to justify her return to a poverty-stricken foreign city.

The film The Fever is just further proof that Redgrave often chooses roles through which she can "openly, or at least indirectly, express her position on social problems", she says. The left-wing artist introduced one more work at the festival, a documentary on the Russia/Chechnya conflict, Voices of Dissent. Redgrave's son Carlo Nero directed both of the films and she produced them.

Carlo's and Redgrave's The Fever is in competition for the festival's prize as does A Way of Life, the debut of young director Amma Asante, who also came to personally introduce it to the festival's audience on December 3. Asante's film also touches on the theme of hopelessness, though this time aiming at the issue of racism, not genocide, like The Fever does.

A Way of Life is the powerful story of a young mother and her three friends, all hovering on the edge of society, whose longing for their dreams leads them to commit a horrific crime on their Muslim neighbour. It is set in Wales, in the UK, where racism is still apparently pretty high.

Asante, who has already received several awards for the film, also wrote the screenplay. She did not have to go far for inspiration. As the only black child in the street, she herself experienced racism and her brother married a Welsh woman. A Way of Life is the first film about the British working class made by a black filmmaker.

British critic Peter Hames, who compiled the I Love UK section for the festival, joined Redgrave and Asante for the day. In 1970, his friend wrote an article referring to British cinema as the "unknown" territory. Hames came to show that things have changed and offered Slovak moviegoers a taste of the current British film scene.

The nine films he selected were strong in quality and diversified in genre and theme. They were a medley of what you can find in today's British cinema, reflecting the diversity of British life. Among them was My Summer of Love, a film that is also playing in Slovak cinemas. The poetical atmosphere of Young Adam is reminiscent of French cinema, the semi-autobiographical work 16 Years of Alcohol showed great camera work, and Dead Man's Shoes, a kind of "Western" style revenge film, felt simply too British with its peculiar accents and expressions.

The British ambassador to Slovakia, Judith Macgregor, asked Hames why today's filmmakers seem to make films about young people, a fact his selection only confirmed. "Maybe I feel young in art," Hames joked, before offering an answer: "I think it's an accidental, unconscious decision on the filmmakers' part."

An expert on Central and Eastern European cinema, Hames prefers to be called a movie historian, someone who promotes movies and helps audiences understand them, rather than writing critically about them. "That doesn't mean that I don't do that as well," he laughed.

Hames' visit was his third in the festival's seven-year history. He was a member of the festival jury in 2001 when the Iranian film Dokhtaran-e Khorshid (Daughters of the Sun), directed by Maryam Shahriar won. The movie was also Hames' personal favourite.

When asked which of the two UK films competing for the Grand Prix this year he would prefer, his choice was Asante's A Way of Life. "It's close to everyday reality in Britain. It is a very powerful film, drawing on British realistic tradition. The Fever is an auteurist construction."