Charm is in the details

THIS DECEMBER marks the 100th anniversary of Franz Lehár's charming operetta The Merry Widow, and Slovakia's opera houses have been seizing the opportunity to commemorate it. Born in Komárno, in what is now southern Slovakia, Lehár filled his music with deep, ardent Slavic melodies that distinguish it from the lighter Viennese-style operettas, such as Johann Strauss's Die Fledermaus. 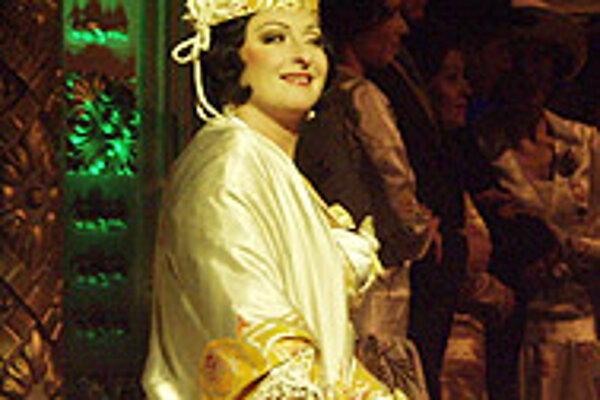 Composed by: Franz Lehár, Libretto: Viktor Léon and Leo Stein, based on the play L'Attache d'ambassade by Henri Meilhac,
Conducted by: Jaroslav Kyzlink
Where: Slovak National Theatre (SND), Hviezdoslavovo námestie, Bratislava
Next performances: December 31 and January 17 at 19:00
Performed: in Slovak with German subtitles
Rating:6 of 10

THIS DECEMBER marks the 100th anniversary of Franz Lehár's charming operetta The Merry Widow, and Slovakia's opera houses have been seizing the opportunity to commemorate it. Born in Komárno, in what is now southern Slovakia, Lehár filled his music with deep, ardent Slavic melodies that distinguish it from the lighter Viennese-style operettas, such as Johann Strauss's Die Fledermaus.

But like its Viennese-style forerunners, The Merry Widow can be compared to a bottle of great champagne: bubbly, yet refined. Its outlandish plot twists and slapstick comedy are entertaining, but require balance from characters who emit genuine charm and touching vulnerability as they waltz through universal themes. The SND's production, however, which premiered last weekend and was directed by Marián Chudovský, featured plenty of silliness, but too little charm.

The story takes place in the Parisian embassy of the imaginary land of Pontevedro. Hana Glawari, a Pontevedrian widow who has inherited 20 million francs, must be persuaded to keep her fortune in the country, so as to save Pontevedro from bankruptcy. Toward that end, Baron Zeta, the country's ambassador, implores the dashing Count Danilo to pursue her. Danilo once loved Hana, but was forced to break up their romance, and has now become a proud philanderer who lives by the maxim "fall in love often, propose rarely, marry never". Hana knows Danilo still loves her, but won't marry him until he confesses it.

Certain essential details were glaringly absent, though. The finely tailored and glamorous costumes, designed by Peter Čanecký, and luxurious scenery, designed by Otto Šujan, effectively communicated the image of high-society, but the performers lacked any significant grace or refinement, reducing themselves to peasants in fancy fabrics.

The drama resolves as Baron Zeta, believing Valencienne has cheated with Camille de Rossilon, declares himself a "patriot" and proposes to Hana himself. Hana laughs and reveals that her dead husband's will dictates she will lose her inheritance once she remarries. Zeta immediately retracts his proposal, but Count Danilo, who's been waiting for the chance to prove he doesn't want Hana's money, falls to his knees and begs her to marry him. Hana then turns the tables again, revealing she only loses her money because it's transferred to her new husband. To end everything happily, Baron Zeta discovers his suspicions were wrong, and that his wife has remained faithful after all.

The final act's scenery highlighted the impressive depth of the national theatre's stage and fed the audience with a sensual, Moulin Rouge-like ambiance, complete with Can-Can dancers, expertly choreographed by Jaroslav Moravčík.

Conductor Jaroslav Kyzlink demonstrated an innate sense for the style, its swing and retardation around the melody's crest, but should have coaxed the singers into bringing it out more. Kohútková sang the Vilja Song, one of the operetta's signature tunes, with beauty and plaintive focus. Babjak was rich and wonderfully resonant on the Love Unspoken theme, a twinkle finally dancing in his eyes and smile.

But that sort of magic should have pervaded the evening. The production team needed only to look at Oscar Wilde plays, which are from the same era and style, to see examples of how completely high-society can shroud its baser instincts in a siren song of charm.