ANY FILM festival brings both disappointments and surprises. A moviegoer must decide if he wants to see a film on the strength of a short description and a photo he finds in the festival catalogue. Even if he knows the director, there is no guarantee the film will be like his other works. 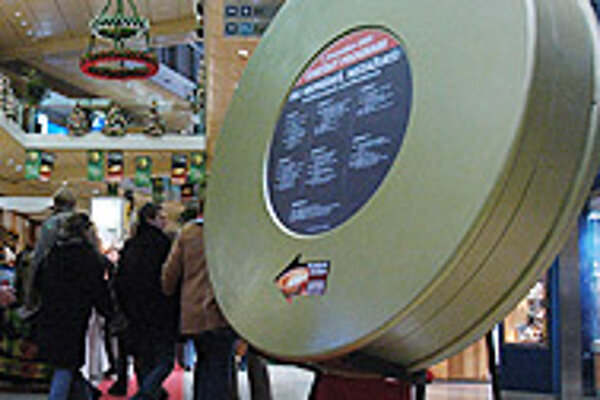 Font size:A-|A+0
ANY FILM festival brings both disappointments and surprises. A moviegoer must decide if he wants to see a film on the strength of a short description and a photo he finds in the festival catalogue. Even if he knows the director, there is no guarantee the film will be like his other works.

It is like rolling dice. You just have to take risks, and you might end up watching treasure, but maybe junk camouflaged by a "big name" or over-the-top press attention. The 7th year of the International Film Festival (MFF) Bratislava had all of this.

Todd Solondz's Palindromes is what you would least expect from this independent director. His suburban family dramas take a surreal twist. Inspired by Bunuel, he uses more than one actress to represent the same character. His new film's references to abortion and Christianity make this a more directly political movie.

Director Michael Haneke stays his usual political self with his latest film Hidden, which is another film theorem about violence. This time, though, his subject is the racial prejudice of Europeans. Hidden is a story of two men, who were rivals as children. The movie climaxes when an Algerian immigrant cuts his throat with a razor in an empty apartment in front of a successful Frenchman, who is a famous TV host.

The Wild Blue Yonder by Werner Herzog was a very pleasant surprise. The German director, famous for his movies containing breathtaking imagery, presented an intriguing genre mix, which he describes as a sci-fi fantasy. The film is an essay on human evolution and human attempts to conquer the universe while at the same time neglecting our own planet. However, the interpretation is not as important as the form Herzog chooses to tell his story. He combines shots and footage that we would usually perceive as documentary into a new context, using montage and voice-over commentary. With this technique, the shots of divers examining arctic seas under thick layers of ice become images of astronauts exploring a new planet light years away from the Earth.

More films from the former Eastern Bloc are appearing at international film festivals each year. The national film industries are gradually recovering from the shock of the market economy and the loss of generous state funding.

A good example is Slovenia, a country half the size of Slovakia. MFF Bratislava introduced it through a few, well-made feature length films. Jan Cvitkovič's Gravehopping shows that he has become a skilled filmmaker. In his latest film he moves away from social criticism and tends towards the transcendental. Damjan Kozole's Labor Equals Freedom is more down to earth. It is a simple story about losing a job and self-respect.

There were also many Russian films on show at the festival. Kira Muratova's The Tuner did not disappoint expectations. The male and female characters were hysterical and the dialogue witty, with precise phrasing from the actors. However, the story was straightforward with few digressions. Two young people (a piano tuner and his girlfriend) trick an elderly woman and steal several thousand dollars from her. The film seems to be a commentary from Muratova on the materialistic nature of Russia today.

Aleksei Uchitel's Dreaming of Space focused on Russia's past. It is set in Stalin's Soviet Union near the border with Finland. The film tells the story in metaphors typical for filmmakers who were trying to hide their criticism of the regime behind parables.

One of the best comedies at the festival was the Belgian movie, Aaltra. Directors Benoit Delépine and Gústave Kervern have made an entertaining road movie about two village enemies who are bound to wheelchairs following an accident. The directors themselves play the two main roles. The two travel to Finland on their wheelchairs to find the factory where the product that has caused their condition is made. Their idea is that they will sue the firm.

Delépine and Kervern were inspired by the works of Aki Kauris-maki and Jim Jar-musch; the former even enters the movie's finale as a foreman at the Finnish factory. There, the two crip-ples make an amazing discovery: a run down shed full of disabled men working with primitive tools on "high tech" machinery.

This year's festival screened a lot of films worth talking about. More importantly, there were more guests this year available to talk to. Many of the evening screenings were sold out and that is always a good sign for a film festival. Let's hope that the film distributors notice that as well and bring some of the titles to a larger number of interested viewers.