TAKING out a loan to pay for a top-of-the-line TV or an expensive piece of furniture for Christmas is reasonable, analysts say, but people should try not to borrow money for short-term purchases like clothes or mobile phones. 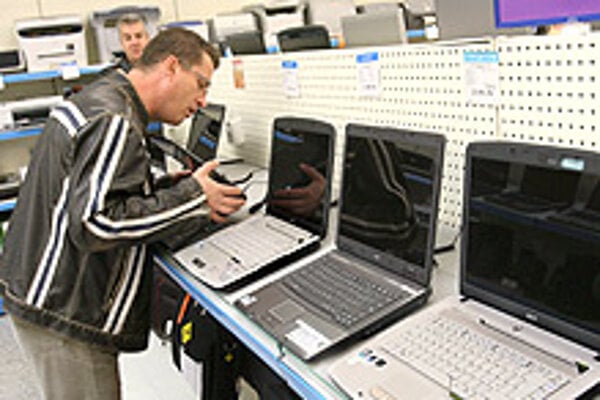 TAKING out a loan to pay for a top-of-the-line TV or an expensive piece of furniture for Christmas is reasonable, analysts say, but people should try not to borrow money for short-term purchases like clothes or mobile phones.

Slovaks tend to postpone their most expensive purchases until the end of the year, as they can be used as a Christmas present for the whole family.

It is becoming more common to use a loan for to pay for these purchases, as the growing economy makes people more willing to take on debts and more able to pay them.

“In Slovakia, Christmas is considered a time of plenty,” said Zuzana Kusá, a sociologist with the Slovak Academy of Sciences. So that’s when people buy practical but “too-expensive” things that they would need to buy anyway. “Too-expensive” can include anything that costs more than half of the average monthly salary, meaning more than Sk10,000 (€300), she said.

“Christmas makes it easier to decide to buy them,” Kusá told The Slovak Spectator. “It is probably the only time when the people do not get a guilty conscience for living beyond their means.”

Banks are seeing a growing demand in consumer loans before Christmas every year, and they expect that the popularity of this type of loans will continue.

“Before Christmas, the number of loans in the Sk200,000 range is increasing,” said Michal Kopecký, communication specialist for VÚB bank. “It means that clients pay for more expensive things that the whole family then enjoys, such as new furniture or a car.”

At VÚB, demand for consumer loans starts getting stronger in October. In November, the bank usually provides almost twice as many consumer loans as it does in other months of the year.

Most clients take out a loan of Sk50,000 or less. However, the average amount of a pre-Christmas loan this year is about Sk90,000, which is Sk8,000 more than last year, Kopecký said.

Clients who need smaller amounts – several thousand crowns – prefer to use credit cards or exceeding the credit limit on their accounts, Kopecký continued.

“Based on experience from previous years, we expect that the amount of approved consumer loans before Christmas will increase by about one-third compared to the annual average,” Štefan Frimmer, the spokesman of Slovenská Sporiteľňa, told The Slovak Spectator.

That bank records the largest increase in demand for consumer loans between October and November, he said.

However, people should think twice when they consider a loan for their Christmas shopping.

The first rule should be to consider their ability to pay the loans, said Vladimír Dohnal, a director of Symsite Research, a market research company.

“The key is to make sure I am able to pay a loan in the case of an unexpected event, such as a broken washing machine or a broken car,” he said.

A general rule is that the payments for all loans should not exceed one-third of a person’s net income, Dohnal said.

“I recommend financing Christmas shopping by loans only when these are things of a long-term consumption, such as a more expensive home appliance, LCD TV, expensive sofa or other furniture,” he said. “I would certainly not take out loans to pay for, for example, mobile phones or clothes, which are things of a daily consumption.”

Loans for lower amounts – up to Sk50,000 – can be taken from either banks or credit instalment companies and it should not make much difference in prices, Dohnal said. But when it comes to higher amounts, the banks are definitely cheaper.

“At a time of high economic growth that will continue in further years, people are more willing to have debts,” he said. “We expect that the growth in volume of loans to households and firms will continue.”

Slovaks are carrying more debt each year, but it is still not at the level of Western Europe or the USA, said Mária Horecká, analyst with VÚB.

“Just a few years ago, the indebtedness of Slovaks was below Hungary and the Czech Republic, but based on the strong growth of loan products, the gap is getting smaller,” she said.

That means there is still room for growth in loans, she added.

The ratio of loans to GDP in Slovakia stands about 15.6 percent, while it is 54.1 percent in the eurozone, according to Tatra Banka. Considering Slovaks’ lower savings, Tatra Banka does not expect Slovakia to reach the eurozone’s loans-to-GDP ratio in the next 10 years.