Fico gets budget and confidence vote

ROBERT Fico now has both a state budget for 2008 and the parliament’s support for his cabinet to keep ruling, as the budget vote on December 5 was tied to a vote of confidence in the government. 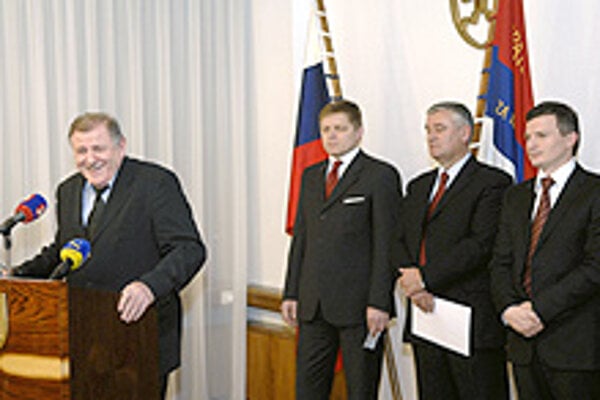 After a few turbulent weeks, Prime Minister Robert Fico (centre) ironed the wrinkles out of the ruling coalition and saw the 2008 budget sail through parliament. (Source: photo: ČTK)
Font size:A-|A+

ROBERT Fico now has both a state budget for 2008 and the parliament’s support for his cabinet to keep ruling, as the budget vote on December 5 was tied to a vote of confidence in the government.

The opposition did not have the numbers to threaten the prime minister’s rule, and the law on the state budget marched through parliament untouched by their amending proposals. The budget was passed in the way cabinet approved it on October 11.

The Fico team celebrated the coffer plans as a historical success. But critics said it was a missed chance to take advantage of the country’s economic vigour.

The public finance deficit – which includes the budgets of the Sociálna Poisťovňa social insurer, pension reform expenses and local administration costs – is projected at Sk46 billion, 2.3 percent of the GDP. That’s below the three-percent Maastricht criterion for euro adoption.

Shortly after the vote, Finance Minister Ján Počiatek said parliament had just passed the best state budget that the country has ever had.

“When I look at the history of deficits, this budget has the lowest deficit in the history of Slovakia,” Finance Ministry spokesman Miroslav Šmál told The Slovak Spectator. “From that point of view, this is really the best budget.”

Keeping the deficit low is one of the conditions for adopting the euro, he added.

“For us the state budget deficit is the key,” Šmál said. “We tried to shape the budget in a way that it not only meets the Maastricht criteria nominally, but it also has enough room to spare (below the limit).”

After his budget passed, Fico said that it not only lays the groundwork for adopting the euro, but also lets the government follow its agenda. He also praised the government for its financial restraint.

“This budget does not waste money,” Fico told the press.

Analysts agree that the deficit is under control, but said that the robust economy did the most to help the budget’s architects.

“It is true that the budget has a low deficit, but at a time of record economic growth, it is natural that the deficit is at a ‘record’ low, because growth pushes up incomes and the sinking unemployment rate puts less of a burden on public spending,” Ján Tóth, chief analyst of ING Bank, told The Slovak Spectator.

While the deficit is in line with euro targets, the structure of budgetary spending is not that positive, Tóth added. Cabinet is saving at the expense of education and infrastructure, and being generous to farmers.

“The budget is good news for the financial markets, which chiefly monitor the deficit and the tax environment, which remained unchanged,” Tóth said.

The Education Ministry will get the biggest piece of the budget pie, with Sk55.494 billion, followed by the Labour, Health, Defense and Transportation Ministries.

The Environment Ministry is lined up to get the biggest increase in expenditures compared to 2007. Including EU funds, the ministry will see its spending rise 124.8 percent to reach Sk7.828 billion.

The Agriculture Ministry budget will swell by 60 percent, the second-highest growth, to reach Sk29.09 billion. The Finance and Culture Ministries will get over 25 percent more than in 2007: Sk10.766 billion and Sk5.115 billion, respectively.

Foreign Affairs will be the only department to see its budget shrink. It gets Sk3.5 billion, a 0.4-percent drop compared to 2007, the SITA newswire reported.

Cabinet called the budget modern and socially-oriented, with its priorities in health care, social affairs, infrastructure, education and agriculture.

“Everyone has a different idea about the budget, however it really consists of two kinds of expenses,” Šmál told the Spectator. “Most of them are obligatory expenses, which mean that the state has to pay them: state administration, social benefits, pensions, highway construction, etc.”

The much smaller sum that is left goes to the ministries, which distribute them based on political negotiations, he added.

But some analysts said the government could have done more with that money.

“The structure of the budget and the planned deficit mean stability for the business environment, on one hand,” the executive director of the Business Alliance of Slovakia, Robert Kičina, told The Slovak Spectator. “But on the other hand, it is also a missed chance for higher investments into education, science and research.”

The budget also missed the chance to lower the payroll tax burden by cutting, or at least slowing, the growth of public expenses at a time of intense economic growth, which generates higher public finance incomes, Kičina said.

The opposition showered the budget’s creators with modification proposals and criticism. Former finance minister Ivan Mikloš, deputy chairman of the opposition Slovak Democratic and Christian Union (SDKÚ), said the budget wasted its chances. He also questioned the government’s honesty about its social orientation.

“You are building a strong socially-oriented state, but with a 10-percent growth of budgetary expenses, you plan a two-percent growth of social spending,” Mikloš said, as quoted by the Hospodárske Noviny daily.

After parliament voted confidence in the Fico team, the prime minister said he did not doubt for a second that his cabinet would get the support.

“After certain turbulences that life brings, it was necessary to show the public that the government has the support of the parliament, which is getting close to a constitutional majority,” Fico said, as quoted by the Sme daily.

Fico, backed by his ruling coalition partners, proposed a joint vote on the budget and confidence in his government as a response to the turbulent coalition crisis. The crisis was sparked by suspicious land deals that cost HZDS nominee Miroslav Jureňa his job as Agriculture Minister.

Smer and the HZDS clashed over the recall. HZDS leader Vladimír Mečiar stormed out of ruling coalition talks and said that his party was being pushed out of the coalition. Later, Mečiar said that the crisis was the result of a lack of communication.

Former prime minister and SDKÚ boss Mikuláš Dzurinda said that the vote was “nothing but an empty gesture,” adding that Fico obviously holds the ruling MPs firmly in his grip.

In response to the developments, the opposition has proposed a non-confidence motion in Fico. Analysts say Fico will survive the vote.