LESS than 24 hours after parliament passed a confidence vote in the government of Robert Fico, the opposition filed a motion in parliament to recall Fico as prime minister. But it was swiftly defeated. 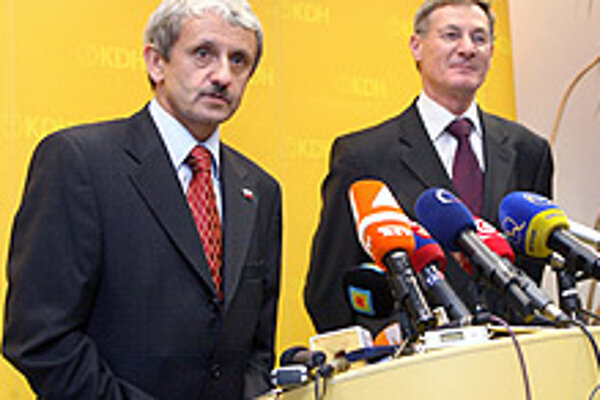 LESS than 24 hours after parliament passed a confidence vote in the government of Robert Fico, the opposition filed a motion in parliament to recall Fico as prime minister. But it was swiftly defeated.

The session that started on the night of December 6 was one of the fastest non-confidence votes ever held in parliament, since the opposition left the floor without attending the vote. Fico easily won the support of the rest of parliament.

The opposition said it left to protest the late-night session.

The non-confidence proposal was signed by several MPs from all opposition parliamentary parties. The opposition said it wanted the vote because of Fico’s inaction in the land transfer scandal at the Slovak Land Fund (SPF).

“The time has come to tear the mask off Robert Fico’s face,” said Mikuláš Dzurinda, chair of the opposition Slovak Democratic and Christian Union (SDKÚ).

The land transfer scandal sparked a crisis the ruling coalition that simmered down after two officials from the coalition’s Movement for a Democratic Slovakia (HZDS) were sacked: Branislav Bríza, the deputy chair of the SPF who oversaw the suspicious deals, and Miroslav Jureňa, whose agriculture ministry had jurisdiction over the SPF.

But the opposition claims that Fico’s Smer party has most of the responsibility for the scandal, because it has the most representatives on the SPF Board. Moreover, Bríza stayed on as the chair of the SPF Board.

“There are serious reasons behind our proposal, which we see as convicting our prime minister of having failed,” Dzurinda said.

But HZDS head Vladimír Mečiar, who previously said his party was being booted from the coalition over the land transfer row, accused the opposition of using the vote to make itself visible. He noted that a confidence vote on Fico’s cabinet, which was tied to approval of the state budget, had just passed the day before.

“It cannot be that we vote on confidence in the government, and in the same week we vote on non-confidence,” he said after the budget vote.

“The government has, and will have, confidence even after that.”

Dzurinda, meanwhile, told journalists that the confidence vote tied to the budget was an “empty gesture.”

Some opposition MPs from the Christian Democratic Movement party (KDH) distanced themselves from the confidence proposal on Fico.

“It is useless. It is needless. I consider it an absolutely useless move,” František Mikloško of the KDH told the TA3 television news channel.

He also objected to “voting twice a week about non-confidence in a government.”

But his party boss, Pavol Hrušovský, said the KDH would support the opposition proposal.

Fico has rejected the opposition’s requests to boot Smer nominees from the SPF, but he has promised an extensive reform of the fund.

The speaker of parliament is required to summon a special session within seven days of MPs filing a non-confidence motion.

The opposition MPs filed the motion on December 5, the day before the parliamentary debate started. Speaker of Parliament Pavol Paška summoned a special meeting to deal with the matter the next night, starting at 19:00.

“We do not understand why we should debate late at night, in the darkness,” Dzurinda said. “I fear that only thieves act at night.

“However strong the coalition may be, I had expected more generosity.”

While opposition MPs did not have the numbers to force Fico to lose his job, the discussion in parliament will probably be embarrassing for the prime minister, said Grigorij Mesežnikov, president of the non-governmental Institute for Public Affairs (IVO) think tank.

“I think the untarnished image that Fico has tried to build and preserve cannot be kept up in the long term,” he said.

The ruling coalition MPs’ vote in favour of the budget and confidence in the government was a show of unity, Mesežnikov said. But the parties had already managed to solve their internal dispute.

“It was a gesture that somehow missed its target,” he told The Slovak Spectator. “I think the budget would have been approved anyway.”

In spite of this demonstration of unity within the ruling coalition, a conflict could still resurface any time, Mesežnikov said.

In recent weeks, Mečiar accused Fico of forcing the HZDS out of the coalition, and Fico reminded Mečiar that he could revive a discussion about the amnesties Mečiar granted concerning the abduction of Michal Kováč, Jr., the son the former Slovak president.

“Relations between Mečiar and Fico are very unstable,” Mesežnikov said. “And I think that the prevailing mood between them is even hatred.”

Mesežnikov stressed that although the HZDS had a clear responsibility for the SPF scandal, the fact that Fico continues to rule with Mečiar could turn against him.

“He is staying in a ruling coalition with someone he actually called a thief,” Mesežnikov said.

Moreover, if Fico dismissed Jureňa because of the dubious transfers at the SPF, the public will expect him to act the same in future cases involving his own Smer nominees, he added.

The new agriculture minister, Zdenka Kramplová, said the prime minister will wait for a committee to submit the results of its investigation into the land fund before proceeding further on the matter.

“I expect we will have a final solution by the end of January,” she told the Sme daily.

The opposition has also blasted Fico for his reluctance to show evidence for how he obtained a vineyard in Bratislava that they claim has given him a multi-million crown profit.

He added that Fico knew the plot would be rezoned for construction when he bought it.

Fico denied the opposition’s arguments, insisting the plot is still zoned as a vineyard. He called Dzurinda a mischievous liar and announced he would file a criminal charge against him, the ČTK newswire wrote.

He said he had bought the vineyard as an opposition politician in 2002. The plot was restituted in the early 1990s. Its owner sold it to a lawyer in 1997, who sold it again to Fico.

Fico said he does not intend to build anything there in the future, either.