Ethical shopping reaches for the mainstream 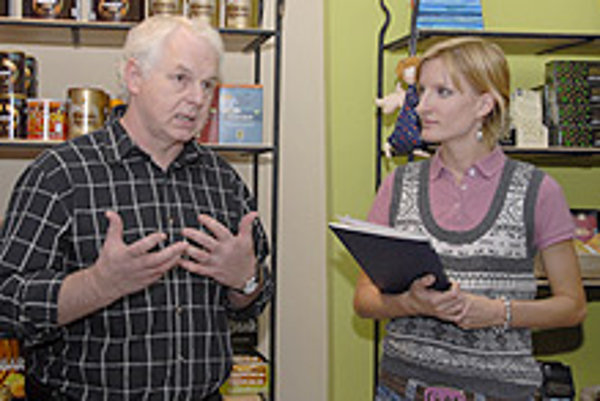 “It’s probably less than one percent that know about it, and maybe in Bratislava it’s about one percent,” said Mirka Vacvalová, marketing director for the Ten Senses fair trade company.

Fair trade companies buy their products from producers who receive fair prices for their goods and work in fair conditions, particularly in developing countries.

The concept of fair trade is better known in Western Europe and North America. In order for it to catch on here, local businesses say they have to do more than just sell products – they also have to educate their customers.

“They start to think about the whole situation, and they say it’s a very good added value to the product that it’s fair trade,” said Darina Manurová of Fair Trade Slovakia. “Besides buying something nice, they are really contributing to something.”

Fair trade has been around since the 1950s, according to the Fairtrade Labelling Organizations International website. In order to be sold as fair trade, goods must be certified to prove that they were purchased for a minimum price, and that their production meets rigorous environmental, labour and trade standards.

These days, fair trade is a billion-euro industry in Europe, said Allan Bussard, chair of The Integra Co-op, which founded Ten Senses.

“If you go into a Tesco in London, you can see Nescafe and Cafédirect (a fair trade coffee brand) side-by-side on the shelves,” Bussard said.

Slovakia’s history in selling fair trade products, on the other hand, is only a few years old. In 2005, Fair Trade Slovakia formed a business organisation to complement its NGO, founded in 2003 to educate young people about development issues.

The Integra foundation, which sprang from a consulting company developed in 1995, started branching into the fair trade market around the same time as Fair Trade Slovakia. It started in 1999 by working with aspiring entrepreneurs from disadvantaged backgrounds, especially women, to get their products to the market.

It was a natural step to move into fair trade, Bussard said. The Ten Senses fair trade store opened on Michalská Street in Bratislava in 2005.

Neither store stayed open long – Ten Senses closed in September 2006 because of a change in the building’s ownership, Spravodlivý Svet closed in April 2007 because Fair Trade Slovakia wanted to focus more on wholesaling. It currently supplies fair trade products to about nine stores in Slovakia.

But both organisations saw a growth in sales and an expanding customer base while their stores were operating.

“The store met all our sales targets and was profitable after the first year,” Bussard said.

Both stores found many of their customers were people who had lived abroad before, in places where fair trade products were more widely available. Others were tourists or locals who discovered the store by chance – especially for Ten Senses, located on one of the busiest streets in Bratislava’s Old Town – or people seeking out healthier food choices.

“When you have face-to-face contact with customers, it’s your task and also your pleasure to talk about products, the countries, the producers and the people living there.”

Educating customers is a key, because most fair trade products have a price premium of 10 to 15 percent compared to regular products, Bussard said.

“In Slovakia, people are still price-sensitive in their purchasing, and that needs to be overcome,” he said.

“People have to know what the point is to be able to pay the price difference. . . . You pay more so the farmers get more.”

At the same time, what you pay for fair trade instant coffee is only a few hellers more than you would pay for a premium instant coffee at the supermarket, Vacvalová said. And increasingly, people in Slovakia are willing to pay more for quality products.

Quality is an important aspect of fair trade shopping. Slovak fair trade companies say they want people to buy their products because they’re good products, not just because they feel duty-bound to help people in need.

“After a certain time, you can try to be a good person, but you can’t manage to drink bad coffee,” Manurová said with a laugh.

Ten Senses opened a new store on Klariská Street in late November. About half of its merchandise comes from the women’s programme, and half of it is fair trade products.

The company’s hopes are high for the new location.

“At the other store, people would come back, so we got quite a lot of followers after 18 months,” Vacvalová said. “I think this store will capitalise on that.”

Ten Senses is also launching a media campaign to raise awareness about fair trade among the general Slovak population. It’s using billboards, advertisements and other traditional venues to reach as many people as possible.

“We want to make it very mainstream,” Vacvalová said.

Both Ten Senses and Fair Trade Slovakia say they get inquiries from stores and schools in regions across Slovakia asking for more information about fair trade.

Bussard predicts it’s only a matter of time before you’ll be able to find fair trade products on the shelves in Slovakia’s supermarkets.

“It’s inevitable,” he said. “The usual process is that, consumer awareness leads to consumer choice, which leads to stores changing their policy.

“There’s no reason to believe that Slovakia’s anything different.”