TRADITIONAL Christmas markets have become one of those seasonal attractions that larger cities use to lure both foreign tourists and locals to the city centre. 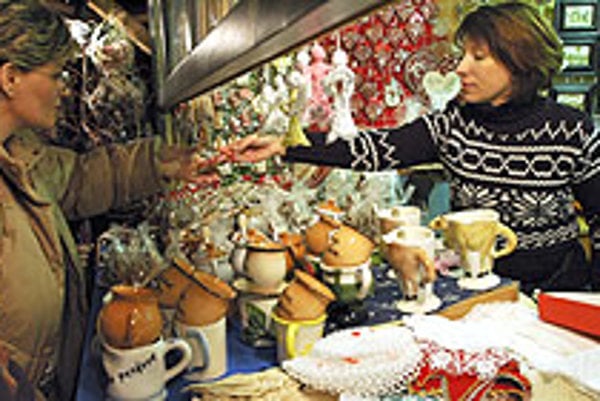 TRADITIONAL Christmas markets have become one of those seasonal attractions that larger cities use to lure both foreign tourists and locals to the city centre.

Despite the fact that Christmas markets originated in Germany and Austria, many tourists consider the Slovak ones to be more interesting than those in neighbouring countries.

“I found the Vienna Christmas fair rather boring,” Nancy from Texas told The Slovak Spectator. “Besides, the offerings are much wider here in Bratislava; there are more folk art products and less commercial wares.”

The products on offer were not left up to chance. The City of Bratislava carefully selected the vendors from numerous candidates.

“We strictly limit the assortment so that it is exclusively traditional,” said Alena Kopřivová, spokeswoman for the capital’s Old Town. “Our special committee decides whether the merchandise meets the highest quality standards.”

In Košice, the selection was based mainly on the experience the city had with the sellers from previous years.

“Vendors already know what we expect them to sell,” Košice City Council spokesperson Jana Geročová said. “So their offerings are varied and balanced.”

Bratislava’s market accepts Slovak crowns or euros, making it even easier for tourists to buy food or gifts. A couple from Hong Kong, who came to Bratislava for only two hours, were charmed by countless novelties found in stands.

“We have nothing of this sort in China, since there are not many people who celebrate Christmas,” said Hui, whose wife, Yu, was buying beeswax candles for her friends. “For me, it means just a few days off work.”

Slovak Christmas markets are relatively cheap when compared to those in Vienna, Prague or Budapest. Lokše are sold for Sk20-40 (€0.60-1.20), a cup of mead costs around Sk30. A filling and tasty lunch for two people can be had for Sk150-170.

By tasting the typical potato crepes (lokše), pork burgers (cigánska pečienka), goose, sauerkraut soup and various baked products, visitors can take a journey through Slovakia’s national cuisine. For those with a sweet tooth, a wide choice of sugary snacks is available.

Tourists are often surprised at how many food items are on sale.

“I like the Slovak markets much more than the French ones because of their atmosphere, which is light-hearted and friendly,” Jean-Noel from Brittany told The Slovak Spectator. “In France, the Christmas markets are less rich in food; you can see hardly anyone eating in the street.”

According to the young man, the other problem with France’s markets is the poor selection.

“They sell chiefly kebab and hamburgers to satisfy the youth and foreigners,” he said.

There are also some charity activities you can support by visiting a Christmas fair. In Košice, for instance, the City Council has put up a stall with “the Mayor’s punch”.

“Proceeds from the sales will be used to aid people in need,” Geročová said. “Every day, the punch will be sold by different famous personalities and local MPs.”

“Three stalls are rented to charity organisations for a symbolic one crown,” Kopřivová said.

Live music adds to the festive atmosphere, with daily performances from various artists, local choirs and singers that attract all generations.

Most of the Christmas markets are held in the city centres up to Christmas Eve. Bratislava’s market takes place in the Main Square, as well as Františkánske Square and Hviezdoslavovo Square. Košice and Prešov have put up wooden stalls in their main streets (Hlavná). Banská Bystrica’s Christmas market can be found in the SNP Square, Žilina’s is in Hlinkovo Square.