Season a gift for book sellers

CHRISTMAS is a vital time of year for the country’s book sellers. 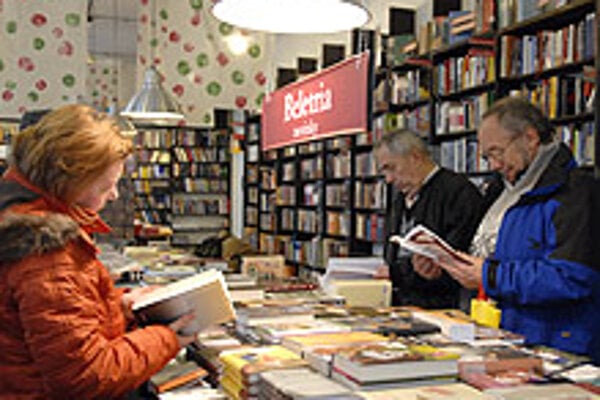 Next year is looking up for publishers and booksellers. (Source: photo: Jana Liptáková)
Font size:A-|A+

CHRISTMAS is a vital time of year for the country’s book sellers.

“Compared with the first 10 months of the year, Artfórum sells 1.5 times more books in November, and in December it is three times more,” said Vladimír Michal from the Artfórum bookshop, a retail chain of five bookshops and an internet store. “We live off it for the next 10 months.”

The Slovak parliament also prepared a kind of Christmas present for the book market when it cut the value-added tax on books by nine percentage points.

Starting in 2008, the VAT on books will be 10 percent. But book sellers are still not sure if the tax break will be a gift or a lump of coal for their industry.

Michal expects that lower VAT on books will give a bit more money to publishers and booksellers, which would lead to more books being published, more publishing houses, a greater variety of books and higher sales.

“I hope that this will breathe some life into the book market,” he told The Slovak Spectator.

Martin Chovanec of the Slovenský Spisovateľ publishing house and online store goes even further, calling the VAT cut on books the best news for the Slovak book industry since the fall of communism.

“This is the first official signal since November 1989 that the government realises what books, reading and its influence on literacy mean for the basic culture of every person in Slovakia,” said Chovanec. “Starting on January 1, 2008, we will not look to the rest of the world like a barbarian country that puts the highest possible tax rate on books and limits people’s access to reading.”

On the contrary, the Ikar publishing house does not expect any significant changes from the lower VAT, said spokeswoman Mária Lešková.

“But we assume that this will slow down price growth,” she said. “In the last period of time, prices for energy, labour, printing works and other areas grew significantly and another increase is expected. This will certainly be reflected in the final price of a book.

“So book prices will also increase, but after the VAT reduction, at a slower pace.”

“Reducing the VAT should also help small booksellers,” she said.

Slovakia increased the VAT on books to 19 percent in 2004. This was one of the highest rates in Europe.

The UK, Ireland and Poland have no VAT on books. In the Czech Republic and Hungary, it’s five percent.

Ringing in the Christmas sales

In 2006, more than five million books were sold in Slovakia, the STV public broadcaster reported in late September. Last year’s figures showed that the demand for books is growing.

The Christmas season in brick-and-mortar bookshops usually starts in November. In online shops it begins earlier, as they need time to make orders and deliveries. Vladimír Bilo from the Panta Rhei bookshop, in the Aupark shopping centre, said people have already started buying books for Christmas this year.

“The interest in buying books is traditionally high,” he told The Slovak Spectator. “People are particularly interested in books with enclosed CDs.”

Chovanec said the real shopping fever will only start a few days before Christmas.

“In spite of this, sales in December reach more than triple the average monthly sales,” he told The Slovak Spectator.

Christmas is also a harvest season for publishing houses. Some of them come out with special products to make the most of the seasonal appetite for books.

Apart from printed books, Ikar has also prepared audio books, which have not yet been common in Slovakia. One title will be Alchymista (The Alchemist) by Paulo Coelho, a Brazilian author who is popular in Slovakia. Táňa Keleová-Vasilková, known as the Slovak Danielle Steel, has narrated on her own Modrý Dom (Blue House), Lešková told The Slovak Spectator. Slovart is focusing its Christmas plans on publishing spectacular and artistic publications.