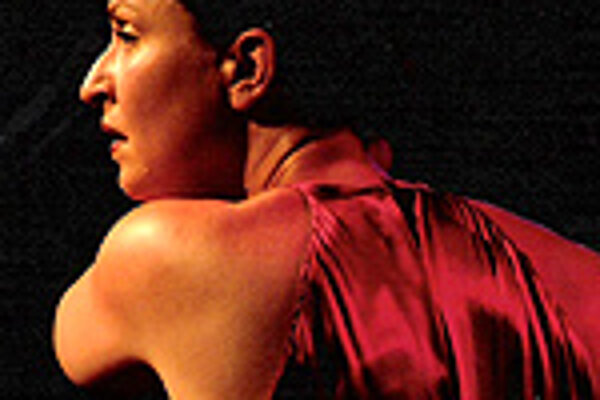 The lighting, like the dancers’ splendid costumes and shawls, radiated deep reds and blacks, evocative of flamenco’s passion and mystery. And fixed atop the auditorium’s usual stage was a wooden platform (which, like a flamenco venue, is also called a tablao) where the dancers strutted and posed as their spirits guided them through zapateado, a deafening rat-a-tat-tat style of tap dance.

It was a stunning and dramatic conclusion to the three-day festival, which was co-founded in 1998 by one of the evening’s main performers, Slovak flamenco guitarist Branislav Krajčo, who’s professionally known as Flaco de Nerja.

“I hope this brings a little Spanish sunshine into your day,” Spanish Ambassador Miguel Aguirre de Cárcer told the audience in a speech before the show.

The performance began with excerpts from Arena y Sal (Sand and Salt), a show by Czech flamenco troupe Arsa y Toma, which included guests Juan Trigueros and Gema Caballero Garzón. The baile (dancing) excerpts varied from momentary couples dancing to solos by the women, Czech dancers Jana Drdácká and Petra Šťastná, both of whom have studied extensively in Andalusia.

The solos were a delight to watch for their crisp palmas, clapping that adds an intricate layer of rhythm to the patterns in the accompanying cante (singing) or toque (percussion), and inspired improvisation, which forms the basis of flamenco’s fiery reputation. The excerpts also included Arsa y Toma dancer Eduard Zubák, whose charisma came through in his limited time on stage.

But the finest baile came from Juan Trigueros, a dancer and choreographer from Alicante who has been performing flamenco for over 30 years. Trigueros danced with the maturity, elegance and risk-taking of a matador, which he actually imitated at one point by removing his jacket and draping it around his shoulders and waist. This elicited shouts of Olé! from the audience, which is part of the jaleo (“hell raising”) that escalates the drama and brings the dancer closer to achieving duende, one’s inner devil.

Arsa y Toma was accompanied by a fine group of flamenco musicians, including Czech guitarist Daniel Gája and Spanish singer Gema Caballero Garzón. Garzón sang with a sharp nasal whine, rooted in the Islamic chants that entered Spanish culture during the 800 years of Moorish rule, and deep expressiveness, clenching her fists and pounding her feet at times when the lyrics spoke of the hardship suffered by everyday people, especially Gypsies.

The next part of the evening featured Flaco de Nerja along with Erik Rothenstein on saxophone, Dino Valeria on percussion, bass guitarist Peter Luha and dancer Sandra La Chispa from Vienna.

Krajčo demonstrated incredible agility and precision on Sinceridad (Sincerity), a fast-paced piece built on a 12-count rhythm known as a bulería. His technique was flawless as he plucked and strummed, his guitar rumbling like an ocean and springing like steps on hot sand. Sentimientos (Sentiment) was a seguiriya, a more solemn form of song. And La Puppi was a rumba to which Sandra La Chipsa danced with lightness and strength.

If only there was a flamenco festival to go to every weekend.