A year of contradictions

THE PAST year has confirmed that Slovakia is on solid ground as a democracy, political watchers said. Changes that occurred after the 2006 elections have not interfered with the stability of the constitutional system. 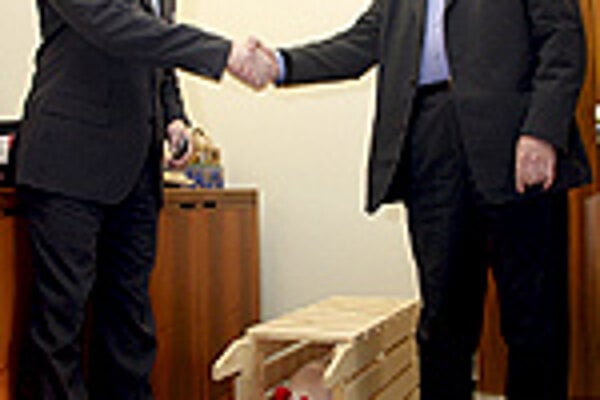 THE PAST year has confirmed that Slovakia is on solid ground as a democracy, political watchers said. Changes that occurred after the 2006 elections have not interfered with the stability of the constitutional system.

“The concerns that populists in power would overthrow democracy did not come true,” political analyst Grigorij Mesežnikov, the head of the Institute for Public Affairs think-tank, told The Slovak Spectator. “And I think the year 2007 proved that on the Slovak political scene.”

In spite of this, it was not a trouble-free year for domestic politics, he added. For example, he said the ruling coalition of Smer, the Slovak National Party (SNS) and the Movement for a Democratic Slovakia (HZDS) tried to totally marginalise the opposition.

“It used quite unfair methods to achieve this,” Mesežnikov said.

The analyst mentioned the last session of parliament, when Speaker of Parliament Pavol Paška of the ruling Smer party set an inconvenient time for the debate on the opposition’s motion to recall the prime minister. The opposition parties – the Slovak Democratic and Christian Union (SDKÚ), the Christian Democratic Party (KDH) and the Hungarian Coalition Party (SMK) – walked out in protest before the vote.

“The opposition is absolutely marginal from the point of view of its participation in the legislation process,” Mesežnikov said. “In fact, not one bill filed by the opposition was passed, and even opposition amendments were turned down.”

From this point of view, the ruling coalition – and especially the Smer party – did not act like a political party working in a parliamentary democracy, but like the ruling party in a totalitarian system, Mesežnikov said.

“Such methods should not occur in a parliamentary democracy, but so far they have not damaged the stability of the constitutional system, fortunately,” he said.

“Slovakia has seen several successes,” Öllős told The Slovak Spectator. “The economy has had quite good results. Our entry to the Schengen zone is a big success, too.”

At the other end of the scale were political activities and statements that verged on unconstitutional, he said.

“I specifically mean the prime minister’s attitude to the opposition; the not quite unambiguous police actions against extremists’ activities; several statements from the chairman of the Slovak National Party; and various corruption scandals,” he said.

According to Juraj Marušiak from the Institute of Political Science of the Slovak Academy of Sciences, 2007 was a successful year for Smer, in particular. That was not just the result of the changes to social policy priorities, but also positive economic trends as a result of Slovakia’s EU membership, he said.

But the economic success of Prime Minister Robert Fico’s cabinet is rooted in the previous government of Mikuláš Dzurinda, Mesežnikov said.

In the tensions in relations between the ruling coalition and the Hungarian minority, both sides can take some of the blame, Marušiak said.

“The deteriorating Slovak-Hungarian relations within the state send a bad signal; but even here, the ruling coalition is not the only one to blame,” he told The Slovak Spectator.

Öllős thinks several parties are culpable for the deteriorating relations.

“These are (connected), in a way,” he said. “They cannot be separated from one another.”

Many reports attributed this year’s tensions to the Slovak parliament’s decision to declare the Beneš decrees inviolable. The post-Second World War decrees stripped ethnic Hungarians living in Slovakia of their land and civil rights.

But Öllős said the whole problem started in July 2006, with comments that SNS chairman Ján Slota made to the Czech daily Lidové Noviny.

“(The SNS) only fights against those representatives of the SMK, who as a minority suppress the majority nation on its independent territory, on the territory of the Slovak Republic,” Slota told the Czech daily.

With this statement, Slota sent negative signals to the Hungarian community, Öllős said.

“So the issue of Beneš decrees did not start this summer, but immediately after the government started to exist,” he said.

Several political analysts, including Öllős, say that re-opening the issue of the Beneš decrees also worsened international relations between Slovakia and Hungary.

“Slovak-Hungarian relations are very bad – to put it briefly,” Öllős told The Slovak Spectator. “As for economic contracts, those are standard, but otherwise, relations practically got to the freezing point after the Beneš decrees.”

The opposition has not been effective this year, Marušiak said.

“The opposition seems to be unable to persuade the electorate about the rightness of its agenda, while in some cases – such as preserving the status quo for health insurance companies, or pension fund administration companies – it seems to defend primarily its own interests rather than the citizens’ interests,” he said.

Mesežnikov said the opposition has not quite recovered from its frustration after losing the last elections. The fact that the opposition parties have not even been able to unite on a joint presidential nominee yet shows that the communication between them has stalled, he added.

“The opposition has been too focused on itself,” he said.

“Smer managed to demoralise its coalition partner, the HZDS, in a crucial way – the HZDS has become dependent on the strongest party of the ruling coalition,” Marušiak told The Slovak Spectator.

Although the ruling coalition has gone through some crises, the interest in co-ruling has prevailed, Mesežnikov said.

“Its rule was based on common values like etatism – strengthening the role of the state,” he said.

The year was also bad for partisan cronyism, and the rise of ethnic tensions in political and public life, he said.

“These tendencies have also connected the three ruling coalition parties,” he said.

The conflict-free relationship between Smer and the SNS helped the coalition, Mesežnikov said.

“Smer tolerates the ethnicisation of the Slovak political scene, and also leaves free room for the SNS to present the nationalist agenda, in exchange for the SNS creating comfortable ruling conditions for Smer,” he said. “The SNS supports the Smer in virtually all conflicts, within the ruling coalition as well as outside of it.”