NOT SURE yet how to spend New Year’s Eve? Bratislava has plenty to offer. 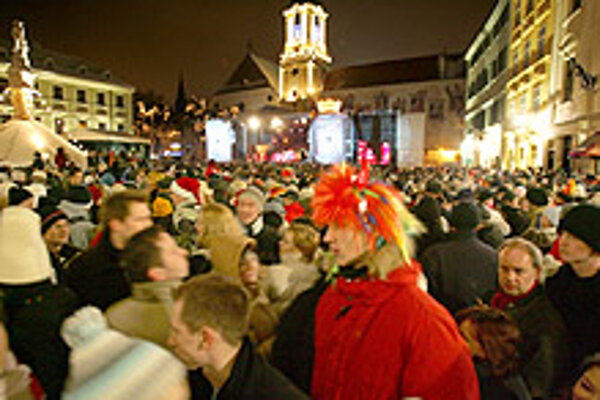 NOT SURE yet how to spend New Year’s Eve? Bratislava has plenty to offer.

For those who want to spend the final hours of 2007 in the centre of town, the city council has prepared a colourful programme suitable for all ages.

“When we started the New Year’s Eve celebration in 1999, we did not know it would become a tradition,” Bratislava Mayor Andrej Ďurkovský said.

Since then, the event’s reputation has grown beyond Slovak borders, attracting thousands of foreigners to Bratislava each year, he said.

The programme for this year features live performances by about 70 artists and peaks with the countdown of the last seconds of 2007.

“We stay on the same note each year: not presenting stars from reality shows, but live performances by artists who have already proven their quality,” said Pavol Murín from the civic association Hlava 98, which has been organizing the cultural programme since its inception. “These will be performers from the top of the Slovak and Czech music scene.”

The Main Square will be again the centre of the festivities. Komajota, who are known as the “Slovak Coldplay”, will kick off the programme at 18:00. The stage will then belong to the ska band Ska2Tonics, Peha, Pavol Hammel and his band Prúdy, and Hex. Vidiek will be the last band to perform in the Main Square in 2007. David Koller, the former lead singer of Lucie, one of the most successful Czech-Slovak pop bands, will give the first live concert in Bratislava in 2008 at a quarter past midnight.

Hviezdoslavovo Square will also be the site of a two-hour programme for children that starts at 16:00. Mariachi band Sin Frionteras, performing traditional Mexican songs, will open the block of folk, world and ethno music, which will also feature Barabura and the Gypsy Devils bands. A disco starting at 22:00 will cap this part of the programme at the square.

As always, the evening’s highlight will be a spectacular music and fireworks display at the Danube River embankment. The best view will be from between the Passenger Port and the New Bridge.

This year, popular pianist Richard Rikkon will accompany the fireworks and usher in the new year with works by Liszt, Chopin and others.

The city council has again prepared some security measures to keep the event safe and calm. The entertainment area will only be accessible through security gates and no fireworks, glass bottles, wooden sticks or other potentially dangerous items will be allowed in.

Such strict measures have proven very effective during the past eight celebrations.

The Slovak National Theatre (SND) and the Slovak Philharmonic have also prepared special programmes for the last evening of 2007.

In the SND historical building, a premiere of Bolero and More..., a ballet choreographed by Mário Radačovský and Igor Holováč, will bring down the curtain on the year 2007.

The Slovak Philharmonic has prepared two festive, identical concerts on December 31 and January 1. The concerts feature the Slovak Philharmonic orchestra and its choir accompanying prominent Slovak mezzo-soprano Jolana Fogašová under the baton of Leoš Svárovký in pieces from famous operas such as Carmen, Il Trovatore, Nabucco and Aida.

Anyone who misses the celebrations can look forward to the Opera Ball on January 12, which will open Slovakia’s annual ball season.