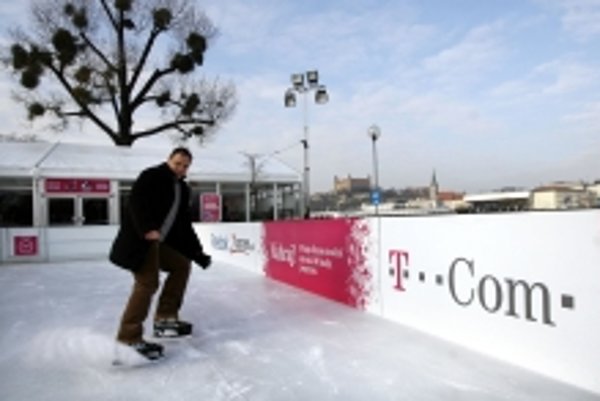 The City of Bratislava opened its new public rink on the Tyršovo Embankment of the Danube on December 18.

The city first gave locals a public outdoor skating rink during the Christmas season in 1999, but it was put on hold in 2005, Milan Vajda, spokesperson of the Bratislava city council, said at the opening of the new temporary rink.

“The public ice rink has a certain history in Bratislava,” he said. “After a break of a few years, this ice rink is the revival of a tradition that is part of every bigger European town.”

The rink is located between the Old and the New Bridges, near the site of the artificial beach that was set up this summer. Apart from a view of the Danube River, the Bratislava Castle and the city skyline, the rink offers a heated refreshment zone, a change room with lockers, toilets and free skate rental.

The change room was particularly welcome – many skaters complained about the lack of changing facilities at the city's previous rink location in Hviezdoslavovo Square.

One mother who brought her two children to try out the ice at the new rink said she was glad she could put their shoes and other things in a free locker, without having to watch them while she skated. Lucia also said she was also grateful for more places to park.

“In the city centre, it was sometimes a problem to find a parking lot,” she said.

The rink is run by the City of Bratislava and T-Com. It cost several million crowns, but Ladislav Faith, the head of the marketing department at T-Com, declined to specify the exact cost.

The rink is scheduled to stay open until February 6, but it could stay open longer depending on the weather conditions and the public's interest, Faith said. The rink uses a freezing technology that keeps the ice usable in temperatures up to 10 C.

“If the weather conditions let it keep running longer and people are interested, we would not rule out extending its operation,” he said.

The last time Bratislava visitors and citizens could enjoy skating in an open-air ice rink was in the winter of 2004-2005.

The council of the Bratislava’s Old Town district got the rink in Hviezdoslavovo Square, worth almost Sk6.2 million (€185,000), as a gift in 1999. But as energy prices increased every year, it forced operating costs to rise. It cost about Sk2.5 million to operate the rink for one season.

In 2005, the Old Town decided that warm winters and obsolete freezing equipment made it inefficient to keep running the ice rink. Instead, it spent Sk3 million on a rink with synthetic ice with almost zero operating costs at the same location.

But people did not get used to the artificial skating surface, complaining that it was too slow, and the rink was mostly empty. Old Town officials said the ice just needed a different form of skate sharpening, and there was a sharpening service right next to the rink. But only a few people used it.

“People were rather disappointed,” Vajda said. “Synthetic ice is not bad, but it is not very suitable for outdoor use. The rink with artificial ice was simply a mistake.”

The Old Town council was ready to sell the old ice rink, i.e. the rink and its freezing equipment, but due to its high operating costs, no other municipalities were interested. It eventually sold it to the village of Eierne, near Eadca in northwestern Slovakia, for a symbolic one crown, the spokesperson of the Old Town office, Alena Kopoivová, told the SITA newswire on December 21.

“Experts think that the ice rink will have a better chance of serving ice skaters there than in Bratislava because winters are cold in that part of Slovakia,” she said.

The Old Town moved the synthetic ice rink to the primary school on Mudrooova Street.

The ice rink organisers have prepared a special programme for the last day of the year.

“There will a disco and the rink will be open until 2:00,” Faith said.

Other areas of Bratislava also have their own temporary ice rinks. Vajnory opened its rink on December 3 and Podunajské Biskupic opened one in late November. Ružinov is also continuing the tradition of its ice rink near Štrkovec Lake.

Bratislava also has two indoor ice rinks open to the public. Ondrej Nepela Stadium is located at Odbojárov Street, and the Winter Stadium in Dúbravka is at Harmincova Street.