“Nationalism has simply asserted itself much easier”

THE RULING coalition has settled into an uneasy peace that will let it keep standing through conflicts like the one that threatened to tear it apart last year, according to one of Slovakia's leading political analysts. 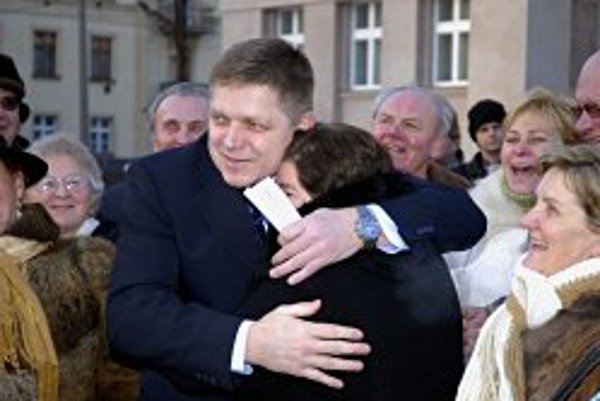 THE RULING coalition has settled into an uneasy peace that will let it keep standing through conflicts like the one that threatened to tear it apart last year, according to one of Slovakia's leading political analysts.

Grigorij Mesežnikov, the co-founder and president of the Institute for Public Issues (IVO), said in an interview with The Slovak Spectator that Movement for a Democratic Slovakia (HZDS) leader Vladimír Mečiar does not appear likely to break his allegiance with Prime Minister Robert Fico, because doing so could threaten his party's existence.

The solid position of the third party in the coalition – the Slovak National Party (SNS) – has also led to a more troubling development, Mesežnikov said: a growing atmosphere of nationalism in the government, and in Slovak society at large.

The Slovak Spectator (TSS): In your opinion, what is the current situation within the ruling coalition, and how will that situation develop over the course of 2008?

Grigorij Mesežnikov (GM): The conditions within the ruling coalition are well-known and obvious. The strong, dominant party – Smer – is prevailing, which gets it support for all of its proposals, and it even had a bit of help from ultimatums recently. After all, it has enough strength and power to use them. And I do not expect any changes in this matter.

TSS: You have explained who holds the balance of power. What are the relations within the coalition like?

TSS: What is the relationship between the Smer and the Slovak National Party?

GM: I consider it quite troublesome, even dangerous for the whole country that Smer actually gives the SNS – and its nationalist agenda – free rein in return for its loyalty. As the SNS always supports Smer's proposals, even in all of the internal coalition disputes, the SNS invariably remains on Smer's side. This party leaves the nationalism of the SNS unnoticed. Now it is even evident that Smer itself has become influenced by this agenda, so that Smer representatives have become more nationally-oriented.

TSS: Is this the explanation for the apparent deepening of nationalistic elements in some Smer representatives? For example, the statements of Prime Minister Robert Fico in Martin on the 15th anniversary of the creation of Slovakia, where Fico used nationalist terms – moreover, in an incorrect way, according to experts.

GM: Yes, the SNS has brought up these issues, and it is generally shifting the public discussion to totally radical standpoints. And as Smer sees that such issues are well received by one part of the electorate . . . Smer itself comes forward with nationalistic historical issues, and opens the issues in a way that is quite unqualified. However, the Smer electorate does not mind Fico stating these errors.

TSS: Do you think that in this way, all of society is becoming more nationalist?

GM: Yes. I consider this to be the reason behind a general change of atmosphere in society. Nationalism has simply asserted itself much easier, as it got a green light from the ruling coalition.

TSS: So in contrast to the SNS, Vladimír Mečiar's HZDS will continue to inflict conflicts on the coalition?

GM: The HZDS does not have enough power and strength to play the role of a strong inner opposition within the ruling coalition. When we analyse what the HZDS has managed so far with its oppositional stance, we see that from the practical point of view, its influence has remained the same, and it has not succeeded in pressuring through practically anything at all. Fico's bills were passed in spite of the fact that the HZDS opposed some of them to a certain degree. And in the latest conflict between Fico and Mečiar, the influence of the latter has been totally marginalised. So I do not expect changes in this point, either.

TSS: How do you think Mečiar will behave? Will he stay fully pacified after he was humiliated by Fico during the last conflict?

GM: With Vladimír Mečiar, one cannot rule out that he will react irrationally or emotionally.

Of course Fico dared to apply pressure, as he knew that the HZDS would not leave the ruling coalition. Within the HZDS, there is strong opposition to the option of leaving the coalition. The majority of MPs support the HZDS staying in government. If Mečiar ordered them to leave, they would be inclined to Fico; this would probably also mean a split in the HZDS caucus, and maybe even in the party itself. Mečiar is very well aware of this fact, too.

TSS: So the personal dispute of Fico versus Mečiar will not escalate, you think?

GM: I think it will not. It must be stressed that Fico is rehabilitating Mečiar's rule as prime minister between 1994 and 1998. Although Fico never mentioned a fight for democracy during this period, now he has several times expressed himself in a way that suggests that he was on Mečiar's side at the time. Moreover, he criticises the current opposition for the way it behaved towards Mečiar when he was in power.

TSS: However, during coalition disputes, Fico opened the issue of Mečiar's amnesties, which prevent this state from sentencing the perpetrators of the kidnapping of the then-president's son, Michal Kováč, Jr., abroad in 1995. And he also opened the issue of proving of the legitimate origins of property that belongs to public officials, which would mean that Mečiar would have to prove where he got Sk100 million to finance his luxury villa.

GM: Yes, but that was rather a means of pressure. A kind of blackmail. But I doubt he really meant it.

TSS: What do you think is the reason that during the rule of Mikuláš Dzurinda, now the chairman of the opposition Slovak Democratic and Christian Union party (SDKÚ), the public was sensitive to the publication of corruption or other scandals in the media, and Dzurinda lost popularity? And now, even when there are scandals about land transfers or Fico's purchase of a vineyard for an unusually low price, Fico's popularity has grown?

GM: With the case of the dubious land transfer around Veľký Slavkov, Fico managed to skilfully shift the whole burden of responsibility to the HZDS. Fico proceeded in the way the opposition asked him to; and he even took from the opposition the whole vocabulary concerning the HZDS. He understood that he could simply not afford to leave room for the opposition to criticise the government, or even to start setting the conditions in the ruling coalition – for example, letting the opposition propose firing (former agriculture minister Miroslav) Jureňa. So Fico took the initiative and crushed Mečiar totally by using the opposition's arguments. He spoke about the scandal, about thefts.

I do not think it was completely right. Smer representatives must have known about the dubious operations at the authority in charge, the Slovak Land Fund (SPF). However, by blaming Mečiar, Fico fully managed to get rid of the responsibility. Now Fico is not only the winner of this fight in the eyes of the public, but also someone who fights for purity in society.

TSS: And what about Fico's vineyard?

GM: The financial contrast of both cases probably played the crucial role. While the land transfer in Veľký Slavkov concerned Sk1.5 billion, the value of the vineyard is much smaller.

And centre-right voters – i.e. the SDKÚ voters – react much more strongly to cronyism and corruption, or to good morals, than Smer voters, who are so-called “bread voters”. These voters now have a good feeling when it comes to the development of our country. And the economic situation really has improved. They give the credit to Fico, but we know that they are not right, as the healthy economic growth was started by the former government.

TSS: So you think there will not be a conflict within the ruling coalition this year?

GM: I certainly do not expect a conflict over reform, or over the issue of removing the reforms of the former government. In this area, the current ruling coalition will always agree.

But there might be a conflict, for example, in the field of Euro-funds; in power and financial issues; and especially if some kind of corruption case and scandal erupts again – like the one surrounding the land transfers. This could again de-stabilise the ruling coalition.

Of course, this does not necessarily mean that something like that will happen, but as we know that this government has been built on the principle of cronyism, the probability that such a situation might occur is quite high.

TSS: And as for the opposition, do you think it will stay in a similar defensive position as it did last year?

TSS: They are a minority, in the parliament as well as the polls.

GM: The support for these three (opposition) parties comes close to the support for Smer. It is too little to get a majority, but it proves that rightist voters are present, and they support their parties to a certain degree. And there is a group that could increase this potential if there is a more skilful mobilisation.

TSS: The situation within the opposition parties is not very bright, either.

GM: At least two parties will continue to deal with their internal problems: the Christian Democratic Movement (KDH) and the Hungarian Coalition Party (SMK). And in the SDKÚ, I feel that it has also failed to improve its image in the eyes of the public, even during the land transfer scandal.

TSS: Do you think that Dzurinda, as the opposition leader, used the wrong strategy in land transfer and vineyard scandals?

GM: No. And I do not agree with the strong criticism towards Dzurinda. Dzurinda used a standard procedure, like an opposition politician should have done.

And in the end, Fico did everything that Dzurinda asked for, right from the beginning. From the factual point of view, Dzurinda played – I would say – a big role in heating up this scandal; he just failed to use it for his own support.

This also proves that Dzurinda is able to enter all these various opposition-coalition power relationships. But so far, he has failed to attract very many voters much since the elections he lost in June 2006.