What health care shows about a country 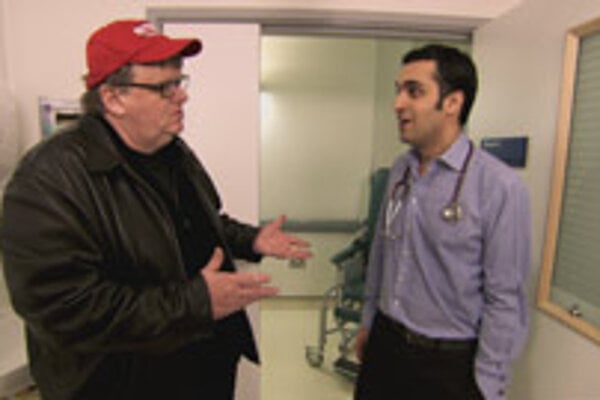 PROVOCATIVE filmmaker Michael Moore paints a bleak picture of the for-profit American health care system in his newest documentary, Sicko, which opened across Slovakia this month.

In his past films, Moore, a hefty man in his early fifties who still sports a Detroit Tigers baseball hat everywhere he goes, played a prominent on-camera role, confronting Charlton Heston in the Oscar-winning Bowling for Columbine (2002) and the CEO of General Motors in Roger & Me (1989).

But in Sicko, he lets everyday people speak for themselves. The result is a focused and mature documentary made up of harrowing health insurance horror stories that tug at your emotions much more than Moore’s previous release, the anti-Bush Fahrenheit 9/11.

But the human interest angle is not all Moore uses to make his case that the American health care system is failing the very people it is supposed to serve. He traces the roots of managed care in America to the Nixon administration and recounts how the Clinton administration’s attempt to make it universal was thwarted in the mid-90s.

Interwoven between the statistics and facts are heartbreaking stories like that of a woman who brought her fever-ravaged two-year-old child to a hospital, only to be turned away because her insurer required that the child be taken to a hospital within its network. When she pleaded with the doctors, she was removed from the hospital for causing a disturbance. Her child died a few hours later.

Then there’s the story of the man who needed a bone marrow transplant, but kept getting the treatment denied by his insurance company because it considered the procedure “experimental”. Even after the man’s brother was found to be a perfect match as a donor, the insurer still wouldn’t pay for the operation, so the man lost hope. He died soon after.

Moore interviews numerous other witnesses to the health care madness, though not all of their experiences ended with someone having died. But another interesting aspect of the film is how many people from within the industry Moore finds to confess that profit, not patient care, is its main concern.

One man he speaks to was a former health care industry “hitman,” whose job was to scour the medical histories of anyone who had filed a large claim, looking for any justification to cancel their policy before the insurer had to pay for the treatment.

Another was a guilt-ridden former health care executive who testified to Congress in 1996 that she had been promoted and financially rewarded by her employer for denying expensive, life-saving treatments to clients who subsequently died.

This leads Moore to compare the American system to those in countries with universal health care, like Canada, England, France and even Cuba. Everywhere he goes in those countries, people either laugh or are horrified at his questions about whether the treatment they’re getting - and, therefore, whether they’ll live or die - depends on whether they can pay for it.

Moore also dispels many of the stereotypes often promoted by the American media and politicians about universal health care systems - that Canadians have to wait hours to see a doctor, that the French have to schedule operations months in advance, or that doctors in England don’t make a living wage.

Sicko clearly shows that in France, doctors are available around the clock to make house calls; patients in a Canadian hospital say they never wait more than an hour to get checked; and an English doctor is living in a million-dollar home in London. And in each country, the system is financed completely by taxes.

Perhaps the most eye-opening part of the film comes at the end, when Moore brings American paramedics and firefighters who became sick after volunteering at Ground Zero in New York on 9/11 to Cuba for medical treatment they could never afford in the US, and have not been offered free of charge.

The Cuban hospitals are clean, the equipment up-to-date and the doctors professional. It drove home just how outrageous it is that a country as rich and powerful as America doesn’t provide what poverty-stricken Communist Cuba can. And it also made it clear that in countries like Slovakia, the poor state of health care infrastructure can’t be blamed solely on decades of Communism.