EVEN though he drew fire last year for attending a birthday do for Cuba’s communist revolution, Prime Minister Robert Fico went back to the Cuban ambassador’s anniversary reception this year. 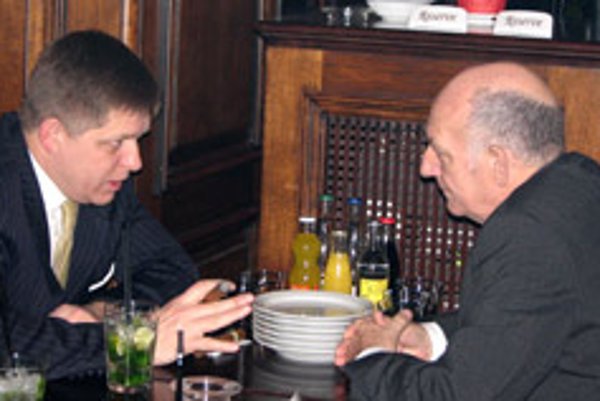 EVEN though he drew fire last year for attending a birthday do for Cuba’s communist revolution, Prime Minister Robert Fico went back to the Cuban ambassador’s anniversary reception this year.

This time, Foreign Minister Ján Kubiš joined the chorus of criticism from the opposition parties, media and non-governmental organisations.

“It is not possible to close your eyes when a situation in the field of human rights is concerned,” he said, the SITA newswire reported on January 10.

Kubiš and other critics pointed out that Cuba deported two Slovaks working with humanitarian non-governmental organisations in the months leading up to the anniversary celebration.

But Fico said there was nothing wrong with his presence at the reception on January 9, arguing that it was not a show of support for Fidel Castro’s regime.

“I am going there like I go to other receptions,” he said at a press conference before the reception. “If that is a crime, then you can hang me by my rib.

“If you go there to relax on beaches, to drink Cuban rum and smoke cigars, then Cuba is perfect and wonderful; if it comes to regular diplomatic contacts between two countries, I do not know what problem there could be,” he continued. “I do not see anything wrong here at all.”

Cuban Ambassador David Escalona Paulovich told the Sme daily’s website that he and Fico talked at the reception about developing potential economic deals and improving the two countries’ relationship.

“We spoke about how to revive our mutual relationship, which was destroyed by the previous government,” he said, the website wrote on January 10. “It destroyed the good relationship that we had with Slovaks. It is high time to renew these relations without the U.S. Government.”

About a week before the reception, Cuba deported Slovak activist Ivana Kullová, who works with the People in Peril humanitarian NGO. Peter Novotný from the Citizens’ Eye NGO was expelled in October, when he met with dissidents during municipal elections. The Cuban government did not even let him contact the Slovak embassy after he was detained, Kubiš said.

“In Cuba, there are problems with respecting human rights and basic freedoms,” Kubiš said at a press conference on January 10. “These issues are a problem for us. That is why you did not see the foreign minister as the representative of Slovak foreign policy. You saw the chairman of the Smer party, a man who does not hide his leftist views.”

But in an interview with the SITA newswire at the reception, Fico was more critical towards his own country.

“Slovakia is really a country that does not have many reasons to preach to others about human rights,” he said, while holding a cigar and drinking a mojito. “Officially, we do have human rights included in the constitution, but let’s look at the reality. If people do not have a good standard of living, we can hardly speak about the application of human rights in society.

“Therefore, I respect every state, and their equality under international law.”

Kullová told The Slovak Spectator that she was upset that the Slovak prime minister attended a reception celebrating the Cuban revolution.

“I do not know of any other European prime minister who took part in a celebration of a Cuban public holiday in their country,” she said. “Top representatives in other countries . . . always send someone in a lower-profile position.”

When she arrived in Cuba for her third trip with People in Peril, Kullová was not allowed to leave the airport, even though she had a valid Cuban visa in her passport, she said. The Cuban authorities declared her persona non grata and ordered her home immediately.

Kullová had planned to visit the families of independent intellectuals and political prisoners, and to give them financial support. Many of them, especially those living in the country, have serious financial troubles.

“Their resources are very thin; they have been left without their breadwinner,” Kullová said.

People in Peril and another Slovak NGO, the Pontis Foundation, co-operate to assist people in Cuba. Their activities do not have a political aspect, Kullová said.

“We do not try to push any change by force, we just bring information on how things work in Slovakia,” she told The Slovak Spectator. “We try to bring information items are missing there, or which are totally distorted and misinterpreted.”

Kullová said she considers helping Cuba to be the repayment for Slovakia’s debt to those who helped Slovakia during the totalitarian regime.

Pavlovich told Sme that Kullová was deported from Cuba because she came to help Americans break up the revolution.

“So we expelled her, and anyone who travels here for American money is bound to end up the same,” the ambassador said.

The former Slovak Ambassador to the United States, Martin Bútora, said Fico’s presence at the reception was a slap in the face of the democratic opposition in Cuba.

“They were punished by Cuban authorities, so one could expect Prime Minister Fico to support his citizens,” he said. “Of course, Cuba has the right not to let someone in, but a democratic state also has the right to react to such a step.”