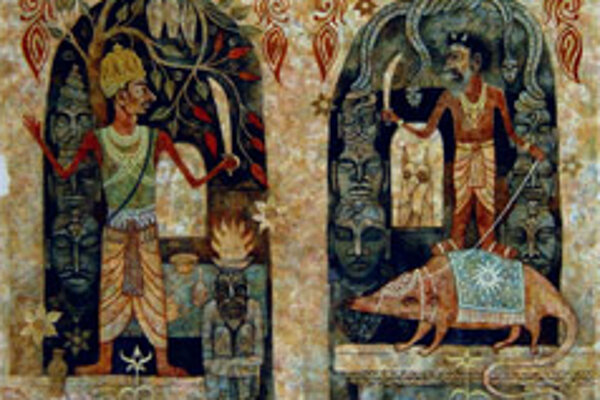 EXHIBITION: YOUNG Slovak artist Dávid Ursiny presents his works inspired by Indian folktales. The charm of Indian epic poems first enchanted Ursiny when he was in his final year of at the Academy of Fine Arts in Bratislava, where he was a student in the department of illustrations led by prominent Slovak graphic artist Dušan Kállay. In 2003 and 2004 he illustrated The Bhagavad Gita, a Sanskrit text from the Bhishma Parva of the Mahabharata epic. The exhibition, titled Dávid Ursiny, is at the Bratislava City Gallery (GMB) at Panská 19, open daily from 11:00 to 18:00, except Monday, until February 17. Tickets cost Sk80. For more information, go to www.gmb.sk.

BALL: Bratislava Ball – The capital city of Slovakia holds the seventh Bratislava Ball, during which the Bratislava Čučoriedka (Blueberry) awards will be given to those deemed to have most enriched Bratislava life.

EXHIBITION: Too Much Love – Czech artist Jiří Votruba known for his book illustrations and graphic works, presents his latest works dedicated to consumerism.

BALL: Folklore Ball – The local folk dance and music ensemble Háj presents the second annual ball with a focus on folklore, hosting one of the best folk music ensembles in Slovakia, FS Železiar from Košice.

FOLKLORE: Night Tours – Performances of folk dance and music groups, refreshment and competitions are part of night tours with lanterns and in masks.

ENTERTAIMENT: SLOVAKIA welcomes the World FMX Championship for the very first time. The Night of Jumps will be full of a stirring atmosphere and extreme performances embel-lished by a fire and light show. Among others, spectators can look forward to seeing Andre Villa from Norway, Nick Franklin from New Zealand, Daisuke Suzuki from Japan, and Libor Podmol from the Czech Republic, all of whom represent the absolute pinnacle of World FMX riders. The adrenaline-packed show takes place in the Steel Arena in Košice on January 26, starting at 19:00. Tickets cost from Sk599 to Sk699. For more information, go to www.fmx.sk.

EXHIBITION: High Tatras by Brush and Camera – The display shows the High Tatras in paintings by Hugo Šilberský and photos of Jaroslav Koupil in years 1950s-1970s.