IT HAS been an unusually foggy winter in Banská Štiavnica. Instead of the usual deep snow, sharp cold and clear skies, a freezing mist has gripped the historic town and the forested slopes of the Štiavnické vrchy. 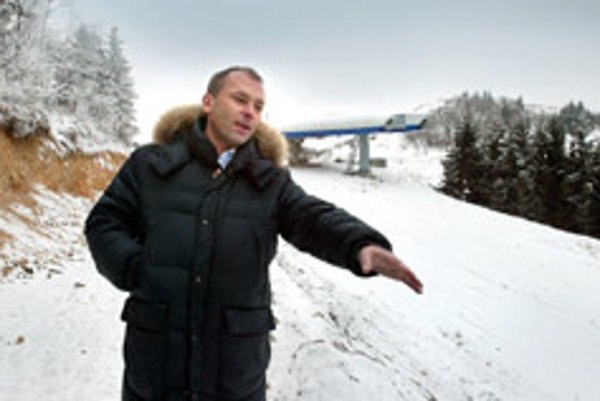 IT HAS been an unusually foggy winter in Banská Štiavnica. Instead of the usual deep snow, sharp cold and clear skies, a freezing mist has gripped the historic town and the forested slopes of the Štiavnické vrchy.

Nowhere has the fog been thicker than at the Ski Centrum resort being developed in these hills by the Kaník family and a Bratislava financial investor. What began as an ambitious project to have a new four-seater ski lift, an after-ski bar and restaurant, and a hotel ready for the 2007-2008 season has now collapsed like the proverbial house built on sand.

At the foot of the snow-less ski hill, bulldozers are still gouging earth out of the ground. The future parking lot is a muddy bog bordered by rusted guardrails. The restaurant building is a concrete shell, the washrooms are more suitable to a labourers' hostel, and the snowmaking equipment is still a figment of the architect's imagination.

Even worse, the company building the resort is now penniless and deeply in debt, its loans have been recalled, and at least some of its property is now in other hands. Its owners are at daggers drawn, having filed mutual criminal charges.

Each side blames its partner for the disaster, but a careful comparison of their stories would seem to leave Ľudovít Kaník, the former minister of social affairs in the 2002-2005 Dzurinda government, in the wrong. Especially after the district court in Žiar nad Hronom on January 15 ruled that Kaník's two attempts to take control of Ski Centrum from his partner were illegal.

According to Ľudovít Kaník, whose family has been involved in the Ski Centrum project since 2003, in late 2006 he began negotiating the entry of a new 50-percent partner to the enterprise with Július Strapek of the Bratislava-based Across Holding financial group. In the end, the JSP company - whose assets Across administers - entered Ski Centrum Banská Štiavnica on February 27, with JSP's Štefan Stanko and Ľudovít's brother Norbert as joint managing directors.

In a decision that was to have fateful consequences for the venture, each director was allowed to sign contracts independently, while general meetings of shareholders could make decisions even if one of the two partners was absent. As both sides later admitted, too much of their business relationship was based on trust, and too little on rules.

"It was very foolish and careless, and far too trusting, but I've known Julo Strapek for years, he was my advisor while I was minister of social affairs, and I had absolute faith in him," Kaník said.

"I admit, the arrangement was pretty naive, but every business relationship has to be built on trust," Strapek said.

For Kaník, the key moment in the dispute came on January 10, 2007, when Stanko, three weeks after becoming managing director, lent Sk100 million from his JSP firm to Ski Centrum. Because of the company's generous statutes, Stanko was able to sign on behalf of both JSP and Ski Centrum, committing the latter to pay 0.5 percent interest for every day the resort was late in repaying the money after the October 31 due date. Calculated over a year, the penalty works out to over 180 percent.

"These conditions were extremely harsh, and the motive was clearly to give the other side a powerful weapon, a large debt that they could use to take over Ski Centrum," said Kaník. The former minister also alleged that Stanko had concealed the loan from him until shortly before it was due.

But Stanko produced a list of supplier contracts that both managing directors had signed in 2007 totalling over Sk300 million in planned work.

A week after the loan came due, the Žiar nad Hronom district court issued a payment order against Ski Centrum for Sk59 million. The debt remains unpaid, and according to Kaník, the penalties so far amount to Sk30 million.

Stanko insisted that the aim of the loan had been to finance Ski Centrum's development rather than to force Kaník out. "The proof of this is that so far, no one has tried to seize the resort's property to pay the debt," he said.

While Kaník was nursing suspicions that his business partner was using his financial muscle to push him out of the project, Stanko suspected the Kaník family of stripping assets from the company by inflating supplier contracts.

In June 2007, JSP discovered that a bill to Ski Centrum for landscaping had been inflated by over Sk200,000 from the original bid of Sk450,000 by the Bačíkstav firm. When questioned, according to a criminal complaint filed by Stanko, owner Ľuboš Bačík said he had been asked to do so by Norbert Kaník, who also asked Bačík to hand him the extra money in cash after the bill was paid.

In an extraordinary letter sent by Norbert Kaník to Strapek of Across Finance, Kaník apologised for what he called "my poor judgement, perhaps the worst in my entire life". He claimed to have asked Bačík to come to the aid of one of his former business partners, Vladimír Nemčok, who was in financial trouble. "I approached him with a request (not an order) to help me solve this problem... I told him that I didn't want to see the money, and that he should give it all to Nemčok."

"For me, that was the moment I lost all faith in my partners," said Stanko, who filed charges for fraud against Norbert Kaník on December 19.

Ľudovít Kaník admitted that some shenanigans had occurred with contractor prices, but denied that his brother had been involved in any wrongdoing. "This is like the Slovak proverb - he who wants to beat a dog will find a stick," he said.

As autumn came and Ski Centrum's financial problems worsened, the Kaníks came up with a new tactic - on November 20, they called a secret extraordinary general meeting of shareholders (EGM) at which Stanko was not present. Again, because of the company's lenient statutes, the EGM was able to take decisions even when one partner was absent. However, the Kaníks used the situation to change the EGM's agenda - which is against the Commercial Code - to include the removal of Stanko as managing director, and to install Ľudovít Kaník, Sr in his place. The Kaník clan now completely controlled Ski Centrum.

"On December 12, while I was casually surfing the internet version of the business register, I discovered to my great shock that I was no longer the managing director of Ski Centrum, and that I had actually been dismissed three weeks before," Stanko said.

At its own EGM the following day, JSP removed the Kaníks and installed Stanko and a business associate as managing directors. A week later, the Kaníks restored Ľudovít Kaník, father and son, at a third secret EGM.

In the meantime, over 100,000 square metres of Ski Centrum's land was transferred to the Kaník family firm on the basis of a contract signed by the Kaníks during their brief December sojourn as directors of the resort. Kaník defended the move as necessary to "block attempts by JSP to sell Ski Centrum's property and strip its assets".

However, because the property was collateral on a Sk49 million loan from the Slovenská Záručná a Rozvojová Banka (Slovak Guarantee and Development Bank) (SZRB), the land transfer caused the bank to foreclose on the 17-year line of credit and demand it be repaid immediately.

Kaník forked over the money, but early in the new year lost the land as well after a local prosecutor protested the transfer, and the local land register office sent the land back to Ski Centrum.

True to form in this tit-for-tat battle, Ski Centrum (now again controlled by JSP) immediately sold the land to the Claims company, which transferred it the next day to Anton Novák, a trusted associate of Július Strapek.

The local court in Žiar nad Hronom put the final nail in Kaník's coffin by ruling in mid-January that the two EGM's he had called had been illegal, as under Slovak law the program cannot be changed without the approval of all shareholders.

Having lost money and land, the court decision also deprived the Kaníks of a voice in the management of Ski Centrum. With JSP in full control of the resort, Ski Centrum did not contest the court ruling against the Kaníks.

"Our side didn't even know the court case was taking place," Kaník said. "We were unable to present our evidence or to appeal the decision."

For local residents who had hoped the resort would finally open this year and attract thousands of visitors to buy the local economy, the legal and financial squabbling has been a huge disappointment.

Zuzana Parajová, the operator of the Penzión Príjemný Oddych in Banská Štiavnica's old town, said she was fed up with both sides of the Ski Centrum fiasco. Rebuilt recently at a cost of millions of crowns, on this foggy January day her penzión did not have a single guest.

"Instead of working together to bring tourists here, it seems like people are more interested in tripping each other up," she said.

"Sometimes I get the feeling this town is cursed."