THE FATE of the coalition's controversial draft press law remains in doubt after the parliamentary opposition vowed to block approval of an international treaty until its objections to the bill are taken into account. 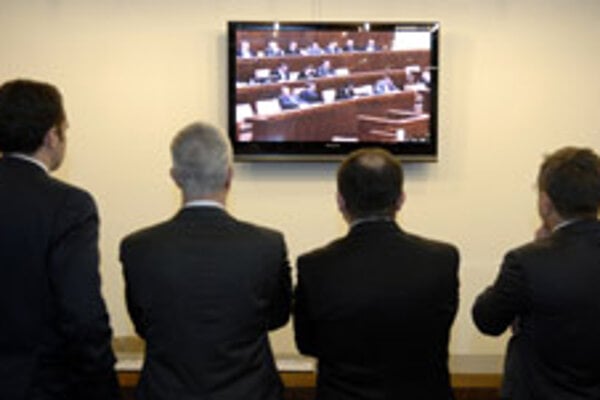 THE FATE of the coalition's controversial draft press law remains in doubt after the parliamentary opposition vowed to block approval of an international treaty until its objections to the bill are taken into account.

The parliamentary deadlock mirrored stalled talks between the Culture Ministry and the Organization for Security and Cooperation (OSCE) over the bill. The OSCE's special representative for media freedoms, Miklós Haraszti, has censured provisions that would give the Culture Ministry the power to levy fines on the press, while ministers in the Fico government have been equally hostile to his intervention.

Meanwhile, on the international stage, criticism of the press bill continued to pour in from international media experts and press freedom watchdogs, who said the Slovak government appeared to be trying to stifle a press corps it has been on poor terms with since taking office in August 2006.

One of the most controversial parts of the law would give the Culture Ministry the power to interpret vaguely worded proscriptions against "propagating" various kinds of hate or "downplaying" the dangers of using drugs. The ministry would have the power to decide which stories violated these rules, and to fine the publisher up to Sk200,000.

"Every word of this provision is undefined and vague," Haraszti wrote in a letter to Foreign Minister Ján Kubiš on January 18. "As a result, it can be arbitrarily used to restrict even mere reporting on facts, events or opinions regarding such behaviours. This clearly transgresses the speech limitation barriers accepted by democracies and international human rights courts."

"We always recommend that an independent body be given the right to pass judgments like this and not the government, so this is a very worrying development," said Karin Karleker, a researcher with the Freedom House press watchdog in New York.

Another contested change would introduce the "right of reply" to Slovak media legislation. While this institution exists in many other European countries, the Slovak model would give anyone who felt they had been impugned by a statement of fact - even if the facts were correct - the right to demand that the paper publish a written response in the same space and of the same length as the original story. Papers that refused to respond could be sued in court, with no cap on the sanctions imposed.

"This draft would give politicians [among others] the right to demand a reply in the media, which would give them a form of editing power, because the responsible editor would have no say in the matter," said Arne König, chairman of the European Federation of Journalists. "That's very peculiar, and at odds with press freedom."

While some media experts grudgingly accepted the need for a right of reply in order to protect individuals and ensure that all opinions were heard in public debate, they said it had to be carefully crafted to avoid trampling on freedom of speech.

"A right of reply that is limited to the correction of inaccurate facts is tolerable," said Julia Apostle, in-house legal counsel for the Financial Times. "But a right of reply that gives a person a platform through which to express opinions, address new issues, etc, is not justifiable because it amounts to legislating what the media has to publish, and this is a clear interference with the right to freedom of expression."

After the OSCE's Haraszti shared these and other thoughts in a press statement on the same day Foreign Minister Ján Kubiš received his letter, Kubiš objected in strong terms to the way Haraszti was using the media to make his point.

"If this approach is supposed to apply some form of pressure, I reject it," wrote Kubiš, ironically himself a former OSCE secretary general. "If it is a way to draw attention to the activities of your office, I believe it is a mistake. I feel that the success of the OSCE as an institution lies in the number of cases it has argued successfully, not in the number of press releases it issues."

Haraszti and Culture Ministry representatives were to have met in Vienna on January 28 for talks, but the summit was called off by the Slovak side with no explanation given. Officials with Haraszti's office said at press time that they were waiting for the Slovaks to provide an official translation of the draft law before talks could go ahead.

The draft press law is currently in first reading in parliament. Whether it will eventually be approved in its third and final reading in March is unclear. According to unofficial information, Culture Minister Marek Maďarič is determined that the law will be passed as is; however, the opposition also appears to be serious about holding the Lisbon Treaty hostage until its demands for amendments are met.

For Karleker of Freedom House, the longer and louder the media community protests, the more likely the government is to cave in.

"Governments everywhere have a tendency to chip away at press freedoms, so it's important that in Slovakia's case, people seem to be standing up and fighting this bill."