NINE more Slovaks have been recognised posthumously for their role in saving dozens of Jews during the Holocaust. 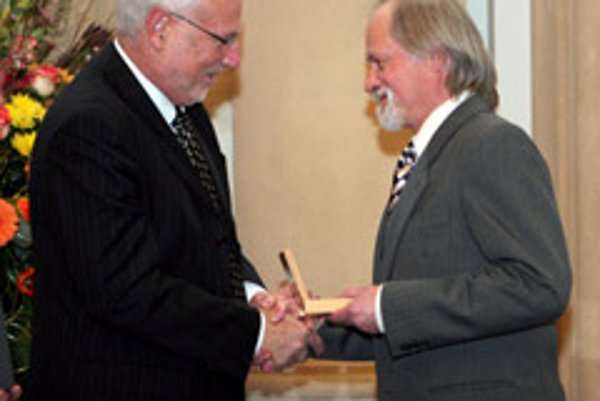 NINE more Slovaks have been recognised posthumously for their role in saving dozens of Jews during the Holocaust.

The Righteous Among the Nations title, bestowed by the state of Israel and the Yad Vashem Holocaust Museum in Jerusalem, was awarded by the Israeli ambassador to Slovakia, Zeev Boker, on January 28.

"But many more people did not survive the Nazi brutality and were killed," he said. "The awards show gratitude to those who plucked up their courage to help Jews in that period, in spite of the risk to their lives."

Speaker of Parliament Pavol Paška asked that the words "Thank you" be said together with the names of the people who saved other people's lives, according to the SITA newswire.

"I belong to the generation that did not experience war," Paška said. "Every time I see the pictures of victims of Nazism, I can hardly believe anything like that existed."

Rabbi Jossi Steiner of Košice said the title of Righteous Among the Nations is not connected with a financial reward, but it is an honorary title.

"The crucial point here is - Thank you for the help," he told The Slovak Spectator.

"Many people in Slovakia failed to behave like humans, but there were also people who managed to do so. They swam against the tide, acted against all odds. By doing so, they risked their lives, and also the lives of their families."

Many feel that one person who did this was Bishop Pavol Peter Gojdič. As early as January 1939, when the first anti-Jewish reprisals started, Gojdič wrote in a pastoral letter that fascism was an epidemic endangering Europe, according to Peter Borza, who represented the Greek Catholic Church in the collection of documents and testimonies for the award committee.

"This unhappy and infectious doctrine is haunting like a new, dangerous delusion in the whole world, especially in Europe, and it is taking its toll," he wrote.

In a letter from May 1942, he instructed Greek Orthodox priests to do as much as they could to help the Jews who were being persecuted, said Borza, a Greek Catholic priest and historian.

Gojdič also wrote to the Vatican that month, requesting them to rein in Jozef Tiso, a Roman Catholic priest who became the president of the Slovak State between the two World Wars, and who was responsible for the deportations of Jews to concentration camps. Gojdič called for Tiso's resignation and described in powerful terms the brutality of the deportations, which were in full swing at the time, Borza told The Slovak Spectator.

"He probably witnessed some of them," Borza said. "He respected people; he did not divide them according to their race or religion. He highly respected them all.

"He could not just watch what happened, and he tried to help as much as he could."

Gojdič also saved many Jewish lives by issuing documents that claimed they had converted to Catholicism, Borza said.

One of those people was Erika Kleinová, neé Fleischerová, whose testimony was read to The Slovak Spectator by Ľubomír Petrík, a Greek Catholic priest:

"Because of the baptism certificate from Bishop Gojdič, I was saved along with my parents, Zoltán and Regina Fleischer. In May 1942, we were selected from the transport heading for Auschwitz."

Gojdič was sentenced to life in prison in the 1950s for political reasons. He died in the Leopoldov prison in 1960, after being tortured.

The Catholic Church recognised Gojdič as a martyr. He was rehabilitated by the Czechoslovak government in 1990, and 11 years later, in 2001, Pope John Paul II beatified him.

Rabbi Steiner asked the people who owe their lives to Gojdič to write down their experiences and send them to Yad Vashem, along with a request for the group to award him with the title.

Steiner noted that not all Catholic dignitaries behaved as humanely as Gojdič did. He mentioned Bishop Ján Vojtaššák, who supported anti-Jewish measures, according to documents from the time found in the national archives, Steiner said.

"Recently, I visited Israeli historian Yeshayah Jelinek," Steiner told The Slovak Spectator. "He told me that when the anti-Jewish measures were voted on (at the State Council), Vojtaššák raised his hand in agreement."

Asked what the difference was between Gojdič's and Vojtaššák's stance, Steiner answered: "Everybody makes his own bed (and has to lie in it)."

There were also compelling stories behind the other Slovaks who got the title of Righteous Among the Nations.

The Adam family from Sabinov saved the family of Jewish ophtalmologist Dezider Grossman.

Farmer Jozef Krivosudský and his wife Magdaléna hid two Jewish families in the attic of their house. When the hideout got too small for the refugees, the Krivosudský couple built another hiding place in another part of the house.

Farmer Gregor Poľko from Lietavská Lúčka was awarded for helping the Jewish owner of a cement factory, Ľudovít Weill, right after the persecutions of Jews started.

The Rapčan family offered their only room and bed to the Lipshutz family.

Viktor and Ema Ruttkay from Žilina saved the Pick family.

Steiner has a similar story from his own experience.

"An ordinary, poor man from a secluded village, Ján Mozolák, saved me," Steiner said. "But he was human and brave and opened his home for us. And today, after so many years, my children still visit his grave."

The Yad Vashem Holocaust Memorial was founded in 1953 in Jerusalem. The Israeli parliament authorised it to document and preserve the history of the Holocaust.