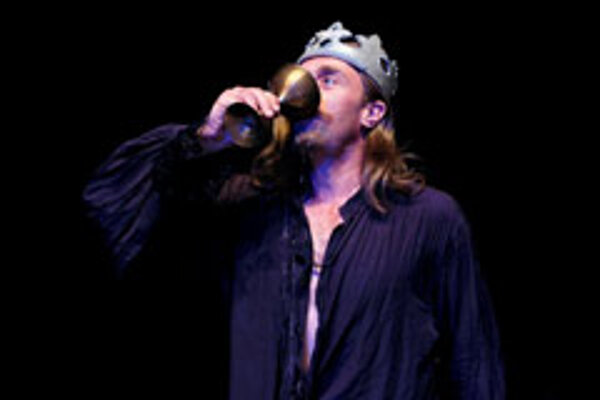 THEATRE: THE SLOVENIAN National Theatre (Slovinsko Narodno Gledališče) from Ljubljana arrives in Bratislava to perform Edward II, an exceptional play by English dramatist, poet, and translator of the Elizabethan era Christopher Marlowe. Slovenian actors will perform the show directed by Diego de Bre, one of Europe's most successful directors, in the new building of the Slovak National Theatre on February 6 starting at 19:00. The play is about the eccentric ruler Edward II, who abdicated for his lover, Piers Gaveston. Marlowe, the foremost Elizabethan tragedian before William Shakespeare, is known for his magnificent blank verse, his overreaching protagonists, and his own untimely death. The ensemble has already toured with the play stressing the movement and visual stylization, which has collected awards in Slovenia as well as Great Britain, France and Germany among others. For more information, go to www.snd.sk or call 02/5778-2534.

EXHIBITION: Bonjour 2008 - Young visual artist Jarmila Džuppová from Michalovce presents her paintings, which bear titles like Philharmonic in TV box or The Shower from the Trebišov Swimming Pool, at her first exhibition in the capital.

MUSEUM: THE SLOVAK National Museum hosts an exhibition of photos of beavers called From the Life of Beavers. Tomáš Hulík, Fedor Čiampor and Andy Šutek took the photos over the course of the last 10 years, during which they watched and documented the life of this exceptional animal. This is already the fourth exhibition dedicated to these beavers, subtitled The Return of Rachel. Hulík, Čiampok and Šutek gave this name to a cautious female beaver, who warned others by hitting her tail on the surface of water. The sound she made resembled the name Rachel when it is pronounced in Slovak. But after thousands of nights spent close to the beavers, the men became part of the family. Ten years ago, none of the men knew the story of this beaver family would become popular in Slovakia. Hulík has published photos and his findings in National Geographic magazine, and Austrian TV station ORF made a documentary about this beaver family. The exhibition is open in the building of the Museum of Croatian Culture in Slovakia at Istrijská 68 in Devínska Nová Ves from Monday to Friday from 10:00 to 16:00 until February 29. Tickets cost Sk40.

EXHIBITION: Wooden Toys - This exhibition presents works by participants of the ninth year of the Studies from Wood competition.

CARNIVAL SEASON: Great Children's Carnival - Organisers have prepared for children a competition for the most beautiful mask and a disco, among others.

FOLKLORE: Carnival March - Folklore and other ensembles march through the city to bury the double bass, the folklore tradition marking the end of the carnival season and the beginning of Lent.