IN THE MIDST of fiery discussions over a recent revision to the Press Act, the election of new members to the councils that oversee the operation of public service television and radio has poured more fuel onto the fire. While the ruling coalition is happy with the list of new council members, the opposition and media experts argue that most of them are close to the ruling parties; a situation that could threaten the councils' independence. 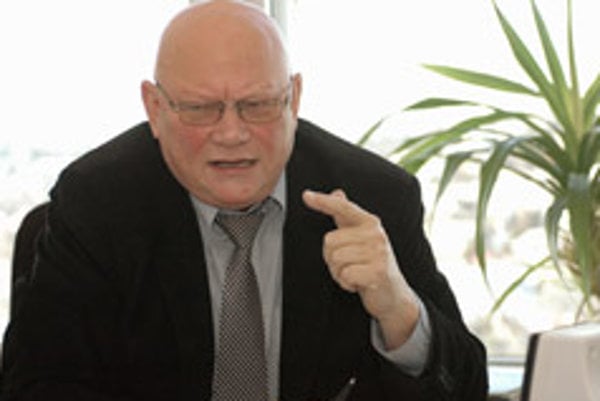 Marián Tkáč, one of the newly elected members of the STV council. (Source: ČTK)
Font size:A-|A+

IN THE MIDST of fiery discussions over a recent revision to the Press Act, the election of new members to the councils that oversee the operation of public service television and radio has poured more fuel onto the fire. While the ruling coalition is happy with the list of new council members, the opposition and media experts argue that most of them are close to the ruling parties; a situation that could threaten the councils' independence.

On the first day of February, Slovak parliament approved the appointment of new members to the control bodies of the public television station Slovenská Televízia (STV), and public radio station Slovenský Rozhlas (SRo) for a six-year term. Five appointees to the STV Council and five to the SRo Council replaced former members whose terms had ended.

Dušan Jarjabek of the ruling Smer party, as the vice-chairman of the Parliamentary Committee for Culture and Media immediately dismissed critics' claims that ruling coalition MPs, who have 85 seats in the 150-member parliament, picked their own supporters to fill the vacancies.

"The parliament has elected these people in a secret ballot," he said the day after the election. "No one can say they were elected due to political wrangling."

However, the opposition sees things quite differently.

"The election of the Slovak Television and Slovak Radio council members confirms that the Robert Fico government has decided to take control of the public media," MP Tomáš Galbavý, a member of both the Media Committee and the opposition Slovak Democratic and Christian Union (SDKÚ) wrote in a statement to the news wires.

On January 8, Milan Urbáni of the ruling Movement for a Democratic Slovakia (HZDS) openly confirmed for the Sme daily that the ruling coalition agreed on which party shall be in charge of SRo and STV.

"We agreed that one part of the political spectrum will control certain spheres," he said. "Thus, we wanted to have the newscast so that we could guarantee this person and his professional qualities and be sure that he will do the kind of newscast that is needed for public TV."

On December 18, 2007, after the ruling coalition council, led by PM Robert Fico, Vladimír Mečiar (HZDS) and Ján Slota (SNS), agreed on the list of candidates, Fico told the journalists: "There are some things about which I do not think it necessary to inform either you or the public."

However, immediately afterwards, Fico went back on his earlier statements.

"Of course, we have interest - which is quite understandable - in seeing our people elected there, people who will represent our interests," he said.

Another newly-elected Council member is Marián Tkáč. Tkáč was nominated by the Congress of Slovak Intelligence, an association close to both the SNS and the HZDS. Tkáč was the vice-governor of the National Bank of Slovakia from January 1993 until April 1994, the period in which Mečiar was prime minister. According to the Nation's Memory Institute's website, he was registered by the communist Secret Service as agent number 37346.

According to the laws governing the public media, "No member of the Council can hold any position in a political party or a political movement, represent them, or act to their benefit. When holding the position of Council member, he or she is obliged to act impartially".

The media has also pointed out another possible conflict of interests in the case of newly-elected Marián Gábor, was nominated by Savid, a business partner of STV. The multimedia company produces programmes and animated graphics, including for STV.

Another case, the new appointee to the SRo Council Eva Jaššová, ran for the SNS in the last parliamentary elections.

Holeštiak co-authored a collection of odes to Jozef Tiso, president of the fascist wartime Slovak State, who deported more than 70,000 Slovak Jews to concentration camps. The collection is entitled The First President in Slovak Poetry and was published by the publishing house Vzlet/Elan in 2004.

In 2000, Lazarová became the editor of Nový Deň, the HZDS's party daily. From 2001 to 2004 she was the head of the publishing house Republika, which published Nový deň. Until October 2006, she was the statutory for the Ateliér company, together with Magdaléna Gáliková, the daughter of Mečiar.

Miroslav Kollár, the former STV Council chairman, whose term ends in March, told the media last December: "Control bodies are elected in parliament, thus I see it as a unprecedented interference in their independence when their memberships are decided on in party headquarters."

"For me, this is the final proof that, in the case of public service, politics has definitely won over professionalism," he told The Slovak Spectator.

Kollár said it is significant that unchallenged media expert Stanislava Benická got only one vote in the secret ballot, while "people whose only qualifications are hosting ridiculous contests on television and cooperating with the secret service got a place on the councils."

Benická was nominated for the position by the Slovak Syndicate of Journalists (SSN).

SSN chairperson Zuzana Krútka told The Slovak Spectator that none of the SSN's three candidates were elected.

"It is surprising that the Congress of Slovak Intelligence, which has by far less members than the SSN, now has two nominees on the STV Council," Krútka said. "And we are a professional organisation of journalists."

Krútka said that the syndicate found that MPs "again preferred narrow party interests to the opportunity of electing independent experts with media experience".

According to Krútka, the laws on STV and SRo should be changed so that only people who could prove their skills and who would be under a minimum of political influence could be elected to the councils.

A similar opinion was voiced by STV Council vice-chairman Peter Malec. When asked by The Slovak Spectator what he thought about the councils' new members, he answered: "I actually only think about the people there who were not elected."

Malec said that the current Council will have to obey those who nominated them. "It will obey politicians, and some interest groups. I'm annoyed that the PM's words have come true."

According to media analyst Andrej Školkay, the spirit of the law had not been followed in the election of the new council members. Members of the media council should have been chosen from among representatives of organisations that represent the public in various sectors, such as religious groups, churches, civic associations, artists, or gardeners, Školkay said.

"But in practice, politicians abuse their power to press through people who are close to them either ideologically or through their party," he said. "That is undoubtedly the case in most of these newly elected council members; and it fully complies with the vision held by the Prime Minister and certain other politicians. But it contradicts the originally intended wording of the law, both that concerning STV as well as SRo."

"These facts do not offer a very optimistic view of the service the public television and radio will give to the public," Školkay said.

This spring, the STV Council will elect a new general manager for STV, but opposition MP Galbavý was sceptical.

"It makes absolutely no difference what the name of the new general manager will be," he told the Nový Čas daily on January 25. "Nobody will become the general manager until he or she signs a loyalty pact with the devil."