Will Slovakia lose the wine of kings?

WHEN Louis XV of France offered a glass of Tokaj to Madame de Pompadour, he called it the "Wine of Kings, King of Wines". Three centuries later, Slovak wine growers from the famous Tokaj region are concerned about its future. 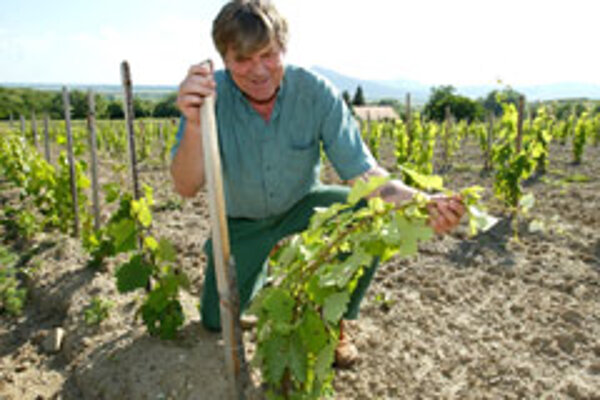 Locals have been fighting for the Tokaj label for more than 40 years (Source: Sme - Pavol Funtál)
Font size:A-|A+

WHEN Louis XV of France offered a glass of Tokaj to Madame de Pompadour, he called it the "Wine of Kings, King of Wines". Three centuries later, Slovak wine growers from the famous Tokaj region are concerned about its future.

Within the past six months, the Slovak authorities have awarded licences to a subsidiary of Australia-based mining company GB Energy Ltd, to carry out geological exploration for uranium, copper and zinc in south-east Slovakia. Moreover, the company Zemplinska Plavebná Spoločnosť was given an approval for perlite mining operations in Malá Bara and the planned construction of a coal-fired power plant by the energy company Československá Energetická Spoločnosť in Trebišov has been equally supported.

The Tokaj region is known for its sweet wines, made from grapes affected by noble rot. Although a major part of the production comes from the Tokaj-Hegyalja region in Hungary, a certain number of Slovak wines are also able to use the Tokaj brand.

The companies claim that their activities would do no harm to the region. The local wine growers, however, are concerned and taking action.

"We have been fighting for the Tokaj label for more than 40 years and now we could lose it," Albert Csizmadia, mayor of Malá Bara, told The Slovak Spectator. He expressed a conviction that the intended mining will harm the region's high-quality grapes. "Not a single expert recommended such an action."

According to Csizmadia, mining causes dusting, which destroys wine leaves and negatively affects the saccharinity.

"We shall undertake all the legal steps to protect this unique region from devastation," she told the media at a press conference on February 5, and added that mayors and residents were preparing a petition against the unwelcome activities.

The Košice Region does not support the project either. Its chairman Zdenko Trebuľa has called on various ministries to help halt the mining operations.

He emphasised that the Tokaj region has been proposed for inclusion on UNESCO's World Heritage List. The Hungarian region of Tokaj-Hegyalja has been on the list since 2002.

"The mining would thwart efforts by experts and Slovak authorities towards the preservation of this precious area," he wrote in his response to Trebuľa's letter.

Zemplinska Plavebná Spoločnosť refused to comment on these claims. Since mayors have lodged an appeal to the Central Mining Office, the management is waiting for the decision.

Ivan Ožvolda from the GB Energy Ltd subsidiary said that all the concerns are needless.

"Exploration works will be absolutely harmless to the air," he told the ČTK newswire. "Besides, even if we discover some significant uranium deposits, it does not necessarily mean that we will start mining."

According to lawyer Jozef Šuchta from the Košice Region, these disputes are important because they might set a precedent.

"The authorities are going to decide whether investors are more important than people or nature," Šuchta said.

He also believes that Slovakia is very attractive for foreign mining companies because of its low prices.

"The Mining Law came from 1988 and fees are therefore hundreds of times lower than in other European countries," he said. "Unfortunately, no revision is likely to be proposed until 2010."

"Many small wine makers are afraid for their cellars," she said. "I was born in the Tokaj region myself and my heart will never be able to part with its vineyards. If this Job's news comes true, the green Zemplín Hills will turn into a lunar landscape."