A lasting memory of regret 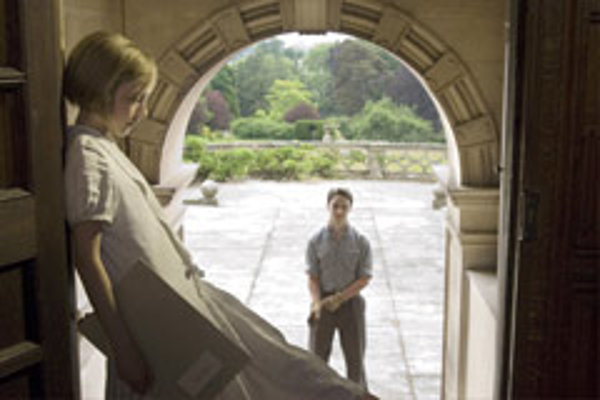 SLOVAK movie theatres have already started screening some of the films nominated for Best Picture at the 80th Academy Awards, which takes place on February 24.

The first is Atonement, which is based on the bestselling, award-winning novel by English writer Ian McEwan.

The film opens with the snap of typewriter keys. Thirteen-year-old Briony (Saoirse Ronan), an aspiring writer, has just finished a play, and she is determined that her cousins help her stage it. The camera follows her as she marches matter-of-factly through her family's countryside estate in mid-1930s England, passing her older sister, Cecilia (Keira Knightley), and Robbie (James McAvoy), the Irish housekeeper's son, whom the family has taken an interest in and educated at Cambridge alongside Cecilia.

Briony has an innocent crush on Robbie and senses the sexual tension between her sister and him, though her young mind can't fully understand it. But she is an adolescent and a storyteller, and the story is set on the hottest day of the year.

So when Robbie later asks Briony to deliver a letter to Cecilia, which Briony reads, she is shocked to discover a sexually graphic note (Robbie had written a more formal expression of his feelings, but accidentally gave Briony the wrong letter), and becomes convinced that Robbie is a 'sex maniac'.

This is confirmed in her mind later that evening, when she finds Robbie making love to Cecilia in the library. Although Cecilia is aware both that Briony has read the note and has seen her with Robbie in the library, she doesn't condescend to explain the situation to her younger sister. And so, left to its own devices, Briony's imagination runs wild.

The turning point occurs later that night, when Briony's young cousins run away from the estate. While the family searches the grounds for them, Briony stumbles across her 15-year-old cousin, Lola, being raped. The rapist quickly escapes, but it is clearly someone from the search party.

When the police arrive, Briony accuses Robbie of the crime and uses the letter he wrote to Cecilia as proof of his sexual deviance. Though her age makes her an unreliable witness, Robbie is Irish and working-class, so the family and the police consider it an open-and-shut case.

Robbie spends the next four years in jail, until war breaks out in Europe. As a soldier, he can see Cecilia (who has enlisted as a nurse) only sporadically and briefly. Cecilia has disowned her family for not trusting Robbie, but that matters little while war is raging and they cannot share a life together. Their only hope is to continue where they left off once he returns from the war.

The second part of the film shows what happens during the war and answers whether the couple finally ends up together. But it has a surprise ending that is quite touching, and that keeps the viewer thinking about the characters, including Briony, for quite a while afterwards.

The actors are excellent in their roles. McAvoy and Knightley have an understated intensity that said more in their romantic scenes together than dialogue could ever have achieved. Their reunion after Robbie's release from prison is heartbreaking for its fleeting glances of regret and longing.

The actresses who play Briony at different ages are also outstanding. Saoirse Ronan (Briony, aged 13) is controlled and convincing, an intelligent and self-assured daughter of the ruling class. Romola Garai (Briony, aged 18) is sympathetic and mature and Vanessa Redgrave (Briony, aged 77) is elegant and compelling.

The film's other notable elements are Joe Wright's direction, which effectively navigates the story's skips in time; the stunning cinematography by Seamus McGarvey; the screenplay by Christopher Hampton, who crafted a faithful yet engrossing narrative, when many films based on novels do not; and the original score by Dario Marianelli, which incorporates the sounds of Briony's typewriter into the music.

Stefan M. Hogan
Stefan Hogan started writing freelance opera reviews for The Slovak Spectator in 2004. Since then, he has become a staff writer for the Culture Section and a liaison for freelancers, singing alongside Placido Domingo and Luciano Pavarotti. His high school years were spent at the prestigious LaGuardia School for Music and Arts and the Performing Arts in New York City and as an exchange student in Berlin, Germany, where he studied German art songs with a member of the Deutsche Oper.Mr. Hogan began his artistic education as a boy soprano in the Metropolitan Opera Children’s Chorus at the age of 8. Upon receiving his Bachelor of Music degree from SUNY Purchase near New York City in 2002, he moved to Bratislava.
Comments disabled
Send the article by email