THE CULTURE Ministry's controversial revisions to the Press Code were sent along the next stretch of their agonising path through parliament on February 12, despite objections from the opposition and Europe's largest security organisation, the OSCE. 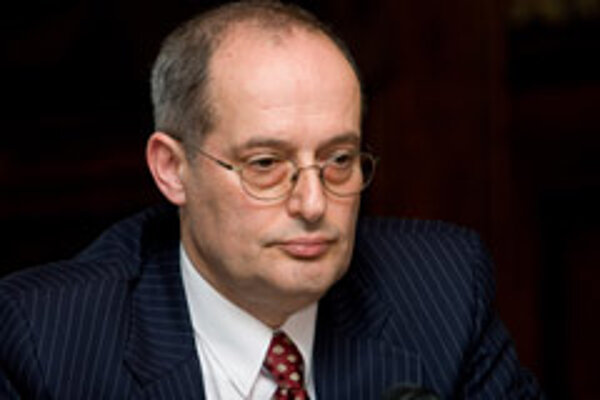 OSCE's Miklós Haraszti has not changed his mind in terms of the criticism of Slovakia's draft press code. (Source: SITA)
Font size:A-|A+

THE CULTURE Ministry's controversial revisions to the Press Code were sent along the next stretch of their agonising path through parliament on February 12, despite objections from the opposition and Europe's largest security organisation, the OSCE.

Miklós Haraszti, the OSCE's special representative for media freedom, said earlier this year that the legislation limits media freedom. He was especially critical of the provisions that would give the Culture Ministry the power to levy fines on the press.

Nonetheless, 81 MPs voted to advance the bill to a second reading, with 59 opposition MPs voting against it.

On February 7, the opposition refused to take part in the vote on the ratification of the Lisbon Treaty, as the Hungarian Coalition Party, Slovak Democratic and Christian Union and Christian Democratic Movement have conditioned their support on the withdrawal of the Press Code. The coalition needs 90 votes to give the treaty the go-ahead.

Parliament will hold the second reading of the Press Code at its March session.

After meeting with Haraszti, Deputy Culture Minister Ivan Sečík told the press on February 8 that the ministry was ready to accept suggestions.

"Undoubtedly, the bill will be changed in some aspects," deputy speaker of parliament Miroslav Číž told STV. "We are going to discuss all reservations."

Vladimír Mečiar, chairman of the Movement for a Democratic Slovakia, also confirmed intentions to take another look at the bill.

"There will be some changes," Mečiar told JOJ TV. "Of course, international opinion will be respected."

Mečiar also confirmed that the ruling coalition has not taken a unified stance on the issue.

On February 12, Iveta Radičová of the SDKÚ said that if the ruling coalition does not accept the opposition's three objections to the Press Code during the second reading in March, the opposition will not vote to ratify the Lisbon Treaty.

The opposition's objections state that only courts, not the Culture Ministry, will have the power to decide when the Press Code has been violated; that the draft code's definition of false information is too vague; and that the protection of journalistic sources be established as a right.

Political scientist Miroslav Kusý said that the ruling coalition is trying to prove its dominance.

"Such muscle-flexing is very unpleasant," he said.

According to Kusý, the coalition is betting the opposition will vote for the Lisbon Treaty even though it pushed the draft Press Code to a second reading. However, he thinks the coalition will eventually amend it.

Grigorij Mesežnikov, president of the non-governmental Institute for Public Affairs (IVO), agrees with Kusý and restated that the Lisbon Treaty is not actually at risk.

Mesežnikov did not expect the coalition to alter the draft Press Code in the first reading.

"But I think there will be changes by the second reading," Mesežnikov told The Slovak Spectator. "Of course, they will spin this as not conceding to the opposition, but rather that it has to be designed in compliance with European standards."