CLOSELY watched prices climbed faster in January than market watchers had expected. Though the year-on-year headline inflation increased by 0.4 percentage points to stand at 3.8 percent in January, mildly startling Slovakia's finance specialists, analysts say the swell will not harm Slovakia's chances of meeting the Maastricht inflation criterion. Moreover, they say, the European Union will be looking at the so-called harmonised inflation rate, which will not include indicators such as imputed rentals. 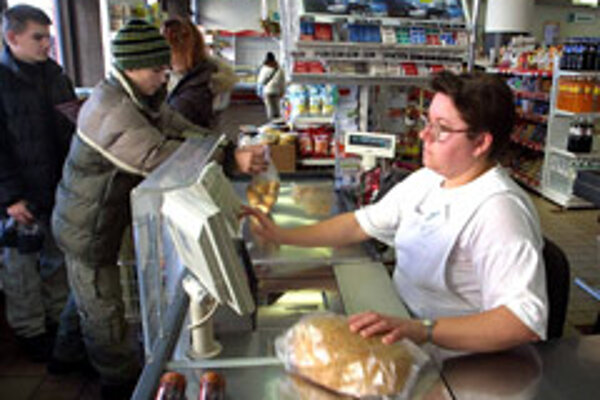 CLOSELY watched prices climbed faster in January than market watchers had expected. Though the year-on-year headline inflation increased by 0.4 percentage points to stand at 3.8 percent in January, mildly startling Slovakia's finance specialists, analysts say the swell will not harm Slovakia's chances of meeting the Maastricht inflation criterion. Moreover, they say, the European Union will be looking at the so-called harmonised inflation rate, which will not include indicators such as imputed rentals.

Just around the time the latest data on Slovakia's inflation performance was released, EU finance ministers warned Slovakia about the increasing pressures on consumer prices. The ministers assessed Slovakia's convergence plan on February 12 in Brussels. Slovak Finance Minister Ján Počiatek has restated that Slovakia should have no problem meeting the inflation criterion.

"Everything is under control," Počiatek told the Reuters newswire before the meeting of the finance ministers.

"The Maastricht criterion on the inflation level will be met with almost absolute certainty," he told The Slovak Spectator.

Headline inflation in January was mainly driven by the prices of food, regulated transportation services and housing expenditures, Pätoprstý said.

"As normally happens at the beginning of the year, the highest month-on-month growth can be attributed to housing related services," Silvia Čechovičová, analyst with ČSOB Bank, told The Slovak Spectator.

Slovaks now have to pay more for waste processing, electricity, heating, water and imputed rent, which pushed inflation up by 0.65 percentage points, she added. The prices of food, health care, transportation services and fuel have contributed to the hike as well.

Imputed rentals had already started climbing last year and the swell has continued into early 2008.

"It's the so-called imputed rentals that have driven inflation up, not simple rentals," Pätoprstý explained. "It's an item that should reflect the amortization of real estate, or in other words, should reflect the price movements of the materials needed for the reconstruction of apartments and buildings."

Food prices posted a significant increase of up to 8.3 percent year-on-year, which, according to analysts, has been one of the steepest climbs since 2001.

However, Pätoprstý expects that that food inflation should fall from its current levels of eight percent to 3.3 percent within the next 12 months.

"So some price pressures in food will remain but should be relatively benign compared to today's levels," he added.

What will the EU be watching?

Čechovičová said that today's higher headline inflation will not threaten the country's prospects of meeting the Maastricht inflation criterion.

When the inflation criterion is evaluated, Čechovičová expects that the 12-month average harmonised inflation rate, covering the period of April 2007 to March 2008, should stand at about 2.1 percent while the value of the Maastricht criterion should be around three percent.

The inflation sustainability criterion should also be met as most of the current price pressures are either of a global nature, which the central bank is powerless to fight, or are of an administrative character, said Pätoprstý.

Food prices at the mercy of global influences

Global influences are behind the climbing food prices, said Stanislav Nemec, spokesman of the Slovak Chamber of Food and Agriculture. However, developments have not been identical across the board, he added.

"While on world markets, food prices, mainly of wheat, bread and dairy products, jumped at almost the same time, in Slovakia the prices have been climbing gradually," Nemec told The Slovak Spectator. "We have to get used to the fact that the level of food prices will keep getting closer to international prices, though some national particulars will certainly be retained."

On world markets, prices were pushed up firstly by droughts in several important producer countries and also by the increasing demand of developing countries, in particular China and India, said Nemec.

Some economists attribute this development of food prices to bio-fuel production programmes which is sucking away the supply of basic agriculture products. However, some economists consider this impact to be only marginal.

Experts predict that food prices will increase by between five and eight percent this year.

However, it is difficult to predict prices in the dairy segment, where the market was saturated after a previous shortage, according to Nemec. Bakers assume that prices will increase, however, the hike will not be as steep as it was last year, he added.

The Slovak Chamber of Food and Agriculture thinks that the steepest raise might be seen in the price of pork since farmers have been selling the meat with a Sk10 to Sk12 loss per kilogramme.

"The gradual reduction of pork production, not only in Slovakia but practically all around Europe, should create a balance between supply and demand," Nemec told The Slovak Spectator.

However, Nemec said that the increase in food prices should not negatively impact living standards, "considering the 18 percent share of the food products in the consumer basket, along with the expected wage hike."

The development of retail prices has dampened considerably since December 2007, Gabriel Csollár, chairman of the board of directors of the COOP Jednota retail chain, told The Slovak Spectator. A strong competitive retail environment and efforts to stabilise prices have contributed to this development.

"In January we registered an unfavourable development in the price of all types of oils, which in January climbed 10 percent, with fats increasing by five percent" said Csollár. "Of course the supplier has been informing us about changes in prices, we only agree."

COOP Jednota, one of Slovakia's largest retail chains, has also registered a hike in prices of alcoholic beverages ranging between seven and 10 percent.

"In this turbulent environment it is very difficult to predict how prices might evolve," Csollár said.

COOP Jednota also expects the price of flour to climb by about four percent since the supplier guarantees prices only one month ahead.

"It would be appropriate to warn consumers about the hidden price swell, which is based on the same prices with only the weight of the product being reduced," Csollár said. "It is not a phenomenon particular to our times; it has been used for a long time and the market has no other choice but to accept it."

Dominika Uhríková contributed to the report.