VIERA LEVITT (formerly Jančeková) moved from Slovakia to the US state of Rhode Island two years ago to introduce Central European contemporary art to a corner of the American public. 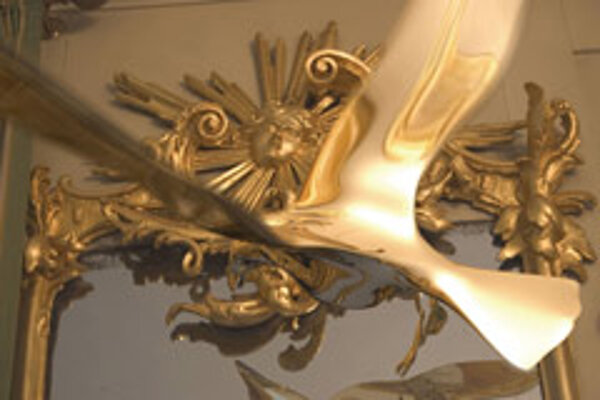 Seagull by Pavel Mrkus was placed in the window of a train station. (Source: Viera Levitt)
Font size:A-|A+

VIERA LEVITT (formerly Jančeková) moved from Slovakia to the US state of Rhode Island two years ago to introduce Central European contemporary art to a corner of the American public.

Levitt, who was director of the Ján Koniarek Gallery in Trnava, first went to the state in 2002 to enroll in a residency programme at the Rhode Island School of Design in Providence.

Last month, she opened Close Encounters, an exhibit she guest curated in cooperation with the Fine Arts Center Galleries at the University of Rhode Island. The last of its three sections wraps up on February 28 after a successful month-long run.

"I'm not surprised, but very, very pleased with the response to the exhibit so far," Levitt told The Slovak Spectator. "People were affected by the art and felt connected to it. That's exactly what I had hoped for."

"I wanted stories of vulnerability and fragility that I thought would connect with people," Levitt said. "Because that's how you involve the public, when they look at a work of art and can apply it to their own life."

The video art is both abstract and documentary in style, and touches on subjects such as aging, the physically handicapped, growing disillusioned with age, the absurdity of war and the power of art to lift the spirit.

Levitt says she avoided art that employed typical post-communist images of gray concrete apartment buildings and factory-polluted countryside, but the exhibit still "belies Cold War stereotypes of a grim, gulag existence", according to a review in the South County Independent.

At the Fine Arts Center's Main Gallery, one of the first videos viewers come upon is Transport, a projection by Pavlína Fichta Čierna that shows a run-down hospital and its indifferent staff from the perspective of a wheelchair patient who's being pushed through long, dark corridors.

"The video raises fears in the viewer about the prospects of aging alone in an uncaring society, and serves as a kind of modern Sisyphus tale," the South County Independent writes. "There is no joy in it, only endless tedium, soulless purgatory and ominous resignation."

Sixtysomething by Milena Dopitová shows the artist and her twin sister donning makeup, wigs and costumes to experience a day in the life of an older generation, and to recreate a scene they saw in a park years before.

KR WP by Artur Zmijewski is a satire of the military that begins with soldiers marching and singing and then transforms into the same imagery done with the soldiers completely naked, except for their hats, rifles and boots.

"The sound is powerful and haunting - like winds howling through a barn door on a stormy night - but the voices and the faces are also a testament to the transcendent nature of creation at its purest and most heartfelt," the South County Independent writes.

The section in the Corridor Gallery shows photographs by Pavel Pecha that illustrate scenes the artist creates using his friends as "actors" and then snaps once the right light hits.

And in a highly innovative move, the exhibit literally brought some of its art to the public by placing Pavel Mrkus' Seagull into a bay window of Providence's Kingston Train Station, where travelers catch the train to New York.

"The exhibit's component in the train station is what caught the interest of a lot of our supporters," Judith Tolnick Champa, director of the Fine Arts Center Galleries, told The Slovak Spectator. "Video art is not something we usually do, but Viera has such an incredible track record of involving communities. It really became about bringing art to a wider audience and drawing parallels between cultures and societies."

The exhibit also provided questionnaires that viewers could use to express some of their thoughts about the art.

"This is not something we do in Slovakia," Levitt told the Spectator, "but I think we should, because the comments we got back were so wonderful."

"And the questionnaire asked an important question of the viewers as well," Tolnick Champa added. "'What else would you like to see in the [Kingston Train] station?' woke them up to the idea that art can be part of your life."

For more information about Close Encounters, go to http://vieralevitt.org.