IN A SHORT period of time scientists and workers uncovered two interesting findings in the western Slovak town of Trnava, the Sme daily wrote. 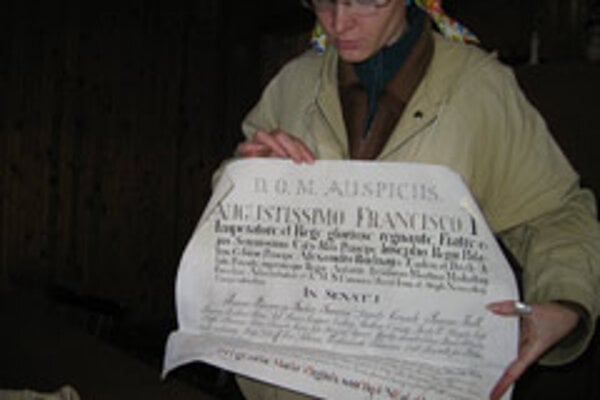 Valuable treasures were recently uncovered in the left tower of this church (shown above in an archived photo) in Trnava. (Source: Jana Beňová)
Font size:A-|A+

IN A SHORT period of time scientists and workers uncovered two interesting findings in the western Slovak town of Trnava, the Sme daily wrote.

During a routine search prior to housing construction at Jeruzalemská street, archaeologists uncovered a hoard of silver coins from the early 14th century.

The silver coins probably belonged to a wealthy burgess. The archaeologists found more than one hundred coins making the finding unique and significant in terms of the amount. Apart from the coins, the archaeologists also found ceramics typical for the period at the end of the 13th and the beginning of the 14th century. When making test holes, the coins, which had been lying underground for more than 700 years, were dug up by chance.

"Originally the coins were in a leather sack," archaeologist and director of the Vlastivedné Museum in Hlohovec Jozef Urminský told the daily. "Firstly we found 106 coins and then another eight."

The hoard consists of Vienna pfennigs as well as Bavarian coins from the first third of the 14th century. "They do not have much artistic character, but they are made from high quality silver," said Urminský.

Experts guess that the owner of the coins hid them during turbulent times in the country. At that time, Matúš Čák III Trenčiansky was battling Charles I of Hungary for control of the region. During an attack the unknown burgess hid his cash in his own house, which then burned down.

The second finding was detected by workers during reconstruction of a tower of the St. Nicolas Cathedral. In a brass sphere above the copula of the tower, they found a container with a message for future generations deposited there during previous reconstructions of the tower.

In the sphere, the workers found a tube from 1825 holding German and Latin documents and coins.

"One of the papers mentions Alexander Rudnay, a significant priest from the beginning of the 19th century," said monument preserver Daniela Zacharová. "The second paper contains names and years, which are probably those of council members. The third depicts the coat-of-arms of the Black Bear Pharmacy. One of the documents looks older than others, and has the year 1760 written on it."

Reconstruction of the tower should be complete in September.