THE IKORES firm, whose owner sponsored the ruling Smer party and built a flat for Prime Minister Robert Fico's mother, has won hundreds of millions of crowns in state contracts since 2006 elections, most recently a Sk100 million order to build a new departure ramp at Bratislava airport. 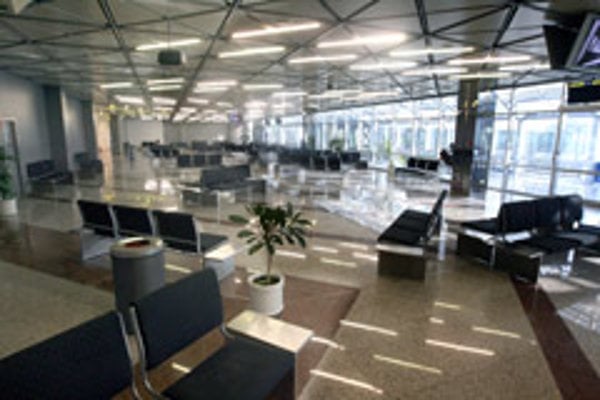 The airport says that the idea for an extra ramp came from Brussels. (Source: Sme - Pavol Funtál)
Font size:A-|A+

THE IKORES firm, whose owner sponsored the ruling Smer party and built a flat for Prime Minister Robert Fico's mother, has won hundreds of millions of crowns in state contracts since 2006 elections, most recently a Sk100 million order to build a new departure ramp at Bratislava airport.

Last year, Ikores won a contract from the Transport Ministry, which is led by a Smer nominee, to build a new parking lot at the airport for Sk38 million, and to reconstruct the arrivals and departures hall for Sk70 million. The work prepared the airport for Slovakia's entry to the EU's borderless Schengen zone last December.

A few months later, as reported by the Sme daily, Ikores was awarded another contract for Sk100 million to build a second departure ramp for the airport. The work was awarded without a public tender, and was completed in September.

Since the Fico government came to power in August 2006, Ikores has won over Sk200 million in contracts to repair border facilities on the Slovak frontier with Ukraine, as well as a Sk1 billion deal - again without a public tender - to build a military archives in Trnava.

Ikores founder Jozef Kopecký donated Sk200,000 to Smer in 2001, and in 2004 Ikores sold a flat in a new housing complex it had built to Fico's mother. The prime minister said he and his brother had put the money together for the purchase, but refused to provide evidence that any money had actually changed hands. Kopecký does not communicate with the press, and did not respond to a request for an interview.

Corruption watchdog Emilia Beblavá from Transparency International said that the latest airport contract only added to concerns that Ikores was profiting from a close relationship with Smer and Fico.

"There are other companies on the construction market, Ikores doesn't have a monopoly," she said. "The way they issued the airport contract arouses suspicion that they wanted to give it to a pre-selected party, who is already suspected of connections to the Smer party."

The airport's deputy director, František Stolárik, said the new management had been forced to turn to Ikores directly without calling a tender because the previous government had ignored Schengen preparations for so long that Slovakia was in danger of not meeting the entry deadline.

"We contacted them directly because we were under time pressure, and in order that we could make use of at least some of the Schengen funding," he said. "We inherited it [the airport reconstruction project] in such a state that we had to do all of the design work all over again. The studies that had been done were not detailed enough, and the departure ramps were only outlined. For at least a year, someone here [at the airport] was asleep at the wheel."

Stolárik, who said he has known Kopecký "for years", also bought a flat in the building erected by Ikores.

Milan Kajan, the previous director of the airport under the 2002-2006 Mikuláš Dzurinda government, said that the reconstruction project had actually been ready to roll out.

"The basic project was drawn up in May 2005 and was valued at Sk23 million, and a year later it was submitted to the Schengen Commission [in Brussels]. The Commission approved it, a tender was held, and the planning permits were even issued."

However, the new management cancelled the tender, ordered a new one, and at the end of 2006 chose a new contractor, Ikores Slovakia, for a new price - Sk70 million. "The new management ignored the existing project for Sk23 million because they wanted one that was several times more expensive," said Kajan.

Transport Minister Ľubomír Vážny promised at the time to review the way in which Ikores was chosen, but to date has not revealed the conclusions of the audit.

Opposition politicians who until June 2006 elections were in charge of the Schengen preparations rejected Stolárik's claims that they had neglected the airport reconstruction.

Former Interior Minister Vladimír Palko of the Christian Democrats, who led the Schengen project in Slovakia, said his party had left the government in February 2006, and thus had not been able to push the process forward that year. Former Transport Minister Pavol Prokopovič of the Slovak Democratic and Christian Union (SDKÚ) said that the Dzurinda cabinet's decision to freeze all important privatisation and public procurement deals five months before elections also prevented the airport upgrade from going forward.

"Still, I see this [criticism] as rather disingenuous from Mr Stolárik, because even before elections he held an important post at the airport, and had an opportunity to influence the process directly."

The work Ikores did at the airport has been criticised as not only expensive but also unnecessary. Given that the departure ramps at Bratislava airport do not lead passengers directly onto their aircraft, but instead deposit them on the tarmac from where they have to take a bus to their planes, the airport could easily do without them altogether.

"If these ramps just lead the passengers down to the runway the way it is today, they are completely ineffectual," Kajan said.

Airport spokeswoman Zora Kalousková said that the idea for the extra ramp had come from Brussels. "A month before [Ikores was awarded the Sk100,000 deal], we received a visit from the Schengen commissioners, who expressed doubts whether one departure ramp would be enough to effectively separate the Schengen from the non-Schengen passengers," she said.

After talks between the interior and transport ministries, it was decided that an appendix would be added to the existing Ikores contract to allow a new ramp to be built. "There wasn't time for a public tender, as the project had to been completed in accordance with Schengen standards by September 2007," Stolárik said.

Beblavá said the airport should have held a "simulated tender with simplified conditions" as a way of finding out which firms on the market were capable of building the ramp and at what cost.

But Stolárik said he had no complaints about Ikores. "The contractor deserves the highest praise," he said. "They did a quality job in record time."