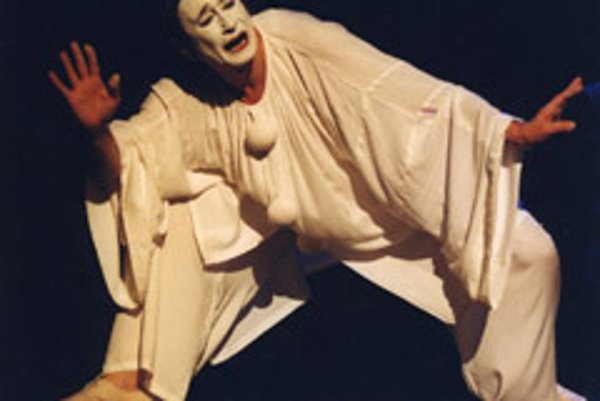 He will perform two shows in Bratislava featuring his latest works, as well as Pantalon and Columbine, which he first performed in 2006.

The first event, which takes place on March 1 at the new building of the Slovak National Theatre (SND), features Sládek in the Slovak premiere of New Solo Pantomimes. The world premiere occurred on February 23, Sládek's birthday, in Cologne, Germany.

The second show will take place in the historical building of the SND on March 8.

Pantalon and Columbine is a reinvention of a pantomime that Wolfgang Amadeus Mozart set to music for a Carnival ball in 1783. The composer himself played the role of Harlequin in the piece.

Austrian musician Johannes Holik worked with Sládek to reinvent the pantomime on the occasion of the Year of Mozart in 2006, which marked the 250th anniversary of the composer's birth. The new show premiered in Jugendstill Theater Wien in June 2006.

Holik reworked the music in a way that preserved Mozart's style while Sládek adapted the pantomime in the style of the Comedie Italienne, which was more popular in Mozart's time than the traditional Commedia dell' Arte, the Theater Forum Schwechat, one of the co-producers of the show, writes on its website.

The pantomime's plot is timeless: Columbine (Olinka Feldeková) and Harlekin (Martin Kusenda) are lovers, but Columbine's father Pantalon (Markus Kofler) wants her to marry Dottore (Juraj Benčík). Of course, Columbine resists, which leads to confusion, anger and conflict, as the tradition of the genre demands. Sládek performs the role of Pierrot, the servant.

Sládek began his artistic education at the Theatre Faculty of the College of Performing Arts in Bratislava and continued in Prague under E.F. Burian, the prominent Czech avant-garde theatre director. His most famous character, Kefka, first appeared in March 1960. One year later, Sládek and his mime ensemble moved to Bratislava. His experimental artistic work was recognised in Czechoslovakia as well as abroad.

However, after the Prague Spring and invasion of Warsaw Pact armies, Sládek's theatre was one of the first to be closed down.

Sládek moved to Sweden and later to Cologne, where he opened the Kefka Theatre in 1974. This was the only permanent mime venue in Europe at that time. In 1976, he organised the First International Festival of Mime Art Gaukler, which took place every year until 1987.

After the fall of communism in Czechoslovakia in 1989, Sládek led the reconstruction of the Aréna Theatre in Bratislava, where in 1994 he opened the International Institute of Mime Art. Each of the seven years he presided as the theatre's director saw a new pantomime show and a pantomime festival. Over the last few years, Sládek has lived in Cologne.

The list of Sládek's works reflects his wide scope of interests. As well as solo and group pantomimes, it includes adaptations of the operas Carmen, Le Nozze di Figaro, The Coronation of Poppea, The Three Penny Opera and the play Ubu Roi, in which he used masks and marionettes.