Far more than a research project

THE BEAUTY of Slovakia's landscape, the richness of its history and politics, the liveliness of a walkable city such as Bratislava, the warmth and generousity of the Slovak people and especially bryndzové halušky. 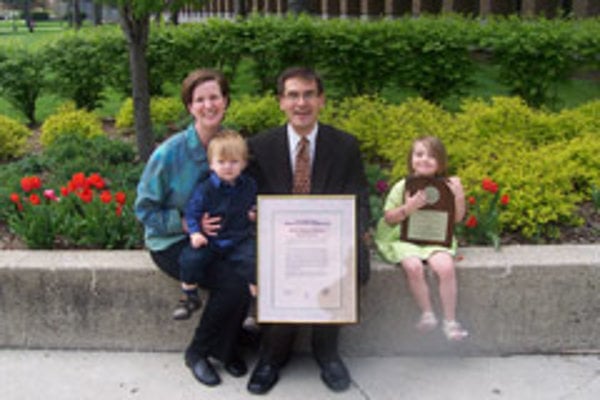 THE BEAUTY of Slovakia's landscape, the richness of its history and politics, the liveliness of a walkable city such as Bratislava, the warmth and generousity of the Slovak people and especially bryndzové halušky.

These are the reasons why Kevin Deegan-Krause, an American political scientist, feels like he's coming home every time he returns to Slovakia.

"I have no right to say such a thing because neither my citizenship nor my ethnic heritage explain my affinity for this country, but the feeling persists nevertheless," he said.

Deegan-Krause is an associate professor at the Department of Political Science of Wayne State University. Last year, he was awarded a Fulbright Scholarship to Bratislava to conduct research here. Given the fact that his interests mainly cover the political development of the post-communist countries of Central Europe, his stay in Slovakia is a perfect opportunity to enhance his understanding.

"As a university student in the late 1980s, I had a vague interest in communist systems," Deegan-Krause said "I remember watching their collapse with some curiosity in the fall of 1989, but I never expected that those changes would be central to my life."

But in the spring of 1990, then-Czech-Slovak president Václav Havel delivered an address at the university Deegan-Krause was attending, just before his address to a joint session of the US Congress. Unfortunately, Deegan-Krause had to work that day, but he took advantage of an invitation Havel extended to the students to come to Czechoslovakia to teach. Deegan-Krause, who had not yet been to Europe, signed on to teach English for a year in Plzeň, starting in the summer of 1990.

"Since then I've made 20 trips back to the region and I would not be surprised if the next 18 years bring 20 more, especially if I can figure out some way to offset my carbon footprint and deal with the sinking American dollar," he joked.

Deegan-Krause lived in Plzeň and Prague for more than a year and spent two years in Bratislava and its suburbs. He's visited every region of Slovakia and nearly all of the 50 biggest cities and towns. After so much time in the region, he's able to conduct most of his interviews in Slovak and Czech, even though his first year in the Czech Republic didn't produce a lot of progress in the language.

"When I came back as a researcher, I spent months remedying that situation by learning Slovak here in Bratislava," Deegan-Krause said. He added that he is particularly grateful to the teachers at the Institute for Language and Academic Preparation for Foreign Students (Ústav Odbornej a Jazykovej Pripravy) in Bratislava, especially Eva Maierová whom he considers the most generous teacher he's ever had.

"I also owe a great debt to the many Slovaks and Czechs who have patiently endured my efforts to master their languages," he said. "They were kind to give me the benefit of the doubt when I explained that I really did have ideas more sensible and complicated than my childish vocabulary would permit."

In 2006, Deegan-Krause's first book, Elected Affinities: Democracy and Party Competition in Slovakia and the Czech Republic, was published. He is currently working on a manuscript called Voting for Thugs, which examines electoral support for post-communist strongmen. Politics and economics has been his major interest since joining the debate team in high school. But before that, Deegan-Krause dreamed of astrophysics and aerospace engineering.

"I still love to look at the sky," he said, "and I would be ecstatic if my daughter or son chose a career in astronomy, but I have become ever more fascinated by the way that people struggle with each other here on earth."

Figuring out who is on what side and what they are really fighting about is what fascinates him the most, as well as how this all changes over time, sometimes without conscious effort and sometimes because politicians succeed in reorienting the political struggle to play to their own strengths.

Deegan-Krause is looking forward to working with Slovak students at Comenius University soon. He expects a lot from his stay here, since he's already had some experience with his Slovak colleagues at the political science department back in 1994.

"And I am absolutely delighted to find that in addition to the well-established and internationally-known scholars who have chaired the department since I first arrived - Miroslav Kusý, Soňa Szomolányi and Darina Malová - the department has a new generation - Marek Rybář, Vlado Bilčík, and many others - whose work has found a worldwide audience in scholarly journals," he said.

According to Deegan-Krause, the time when Slovakia's political problems were exceptional, even for post-communist Europe, is over, which doesn't mean its current problems are painless.

"In the political realm, I worry that the Slovak government might lose the ability to be truly responsive to its people's needs and become ever more focused on media-driven, symbolic politics rather than the hard work of making compromises and finding innovative solutions," he said.

He added that even though this is a general problem in democratic countries, it might be more dangerous in Slovakia because the political parties here have become so centralised. Nevertheless, he said he maintains hope.

Deegan-Krause is proud that his earliest writings on Slovakia offered good reasons for expecting that its people would mobilise against the abuse of political power and produce a government that upheld values of accountability, tolerance and social justice. He now hopes for a government that exemplifies all of those values, but acknowledges that this is a world-wide problem.

Apparently, his relationship to Slovakia has grown far more personal than just a research subject.