HE LEFT the Christian Democratic Movement (KDH) with visions of a new conservative party that could break up the Slovak National Party's (SNS) monopoly on patriotism. 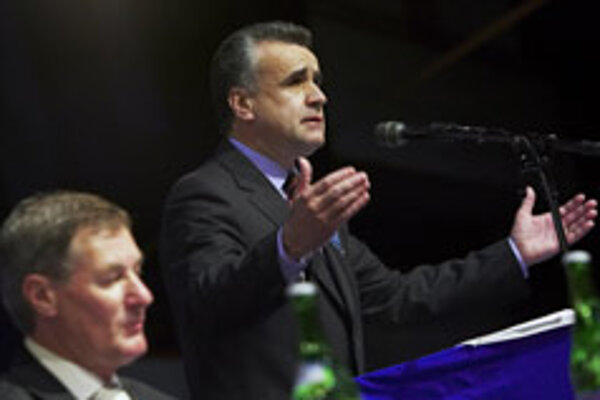 HE LEFT the Christian Democratic Movement (KDH) with visions of a new conservative party that could break up the Slovak National Party's (SNS) monopoly on patriotism.

Vladimír Palko, former vice-chairman of the Christian Democratic Movement, said that the party he founded has deviated from its original values. The Slovak Spectator spoke to the former interior minister and onetime deputy chairman of the party about the implications of his departure and that of his like-minded colleagues František Mikloško, Pavol Minárik and Rudolf Bauer.

The Slovak Spectator (TSS): Why did you leave the KDH?

Vladimír Palko (VP): The KDH, at least the vast majority of the party and its leadership, has lost the will to fight and make sacrifices for the ideals that the KDH was founded on. The party's values have been completely warped.

TSS: You have said you had the impression that members of the KDH regretted the decision to leave Mikuláš Dzurinda's ruling coalition several months before the elections in 2006?

VP: This is not just an impression, it's an absolute certainty. And this regret persisted after the election. Some members really thought the party would leave the government, only to return to power after the elections in a coalition with Smer.

TSS: Did district party bodies put pressure on the party leadership to make the KDH part of the Smer government?

VP: Yes, all bodies, as well as the KDH council. If someone defended the decision to quit the Dzurinda cabinet and simultaneously voted against a coalition with Smer, these bodies turned against him. Mikloško did this in a speech, and they booed him. The party had a motto - share the government with anyone. This was the problem of the KDH.

When I founded the KDH 20 years ago, it was a party that stood against communism to build a democratic society. Now, I find myself being punished for refusing to cooperate with an overpowering communist force.

TSS: Do you consider Smer a communist party?

VP: It is a post-communist party. Just look at how many of their current ministers were communists: the prevailing majority.

TSS: What are your other objections to the [KDH chairman Pavol] Hrušovský wing?

VP:For me, it is absurd to be a member of a party that would punish me for voting against a coalition with Smer.

Pavol Minárik failed to be reelected as chairman of KDH parliamentary club in the summer of 2006 because he voted against Smer. It is hard to prove that he was opposed for this reason, but I felt that a negative atmosphere was developing. I started realising that I did not want to be vice-chairman in such a party, so I gave up the position.

TSS: But then you ran for chairman.

VP: That was a chance to change things. Of course, being accepted as chairman would have accomplished that.

TSS: What was the last straw that caused you to depart the party now, almost two years after the tension over the election?

VP: I suddenly understood that I could not make a single speech, although I spoke fully in accordance with the KDH line, without being attacked, as if I was doing something illegal. I was only doing my job. A year and a half after the elections, it turned out that I was right but nevertheless, the persecution continued.

Besides, you cannot fight against Smer in a party that is burdened by the regret that we are not in the ruling coalition.

Another issue that bothered me was that the KDH was unable to decide on a presidential nominee. The party is under the thumb of the SDKÚ, without any strategy of its own. The bottom line is that the KDH will probably support the SDKÚ's nominee.

TSS: So you feel that being outside the KDH will make you better equipped to act in opposition to Smer?

VP: No. The crucial thing was learning that the KDH had lied. That this party has been fully immersed in lies and was unable to admit its failures. Now, it is necessary to found a new party.

TSS: What kind of party?

VP: We have a certain vision of why the opposition is in such trouble. We think it is because it offers no contrast to the current ruling coalition's pragmatism. But with one difference: Fico can be much more of an opportunist, populist and pragmatist.

The policy of the new party will be gaining people's trust that we mean what we say.

TSS: When do you expect the new party to be created?

VP: I don't know, but I do know what kind of a party Slovakia needs: one that respects patriotism, keeps its promises and consists of people with moral integrity instead of politicians who evade everything. It should be a conservative party based on traditional values respected by most people. This means that there must be patriotism, support for the family and a firm stance in defence of freedom, be it political or economic.

There will be a fourth opposition party in parliament in several days or weeks. For now, we will work as members of parliament.

TSS: Some political analysts have called your politics in the KDH nationalist.

VP: It is not that nationalist. I don't believe patriotism should be left solely to the SNS. The SNS represents the trend of spreading hatred towards Hungarians. This is a rather effective card to be played in Slovakia. However, it does not mean that we should leave the notion of patriotism solely to the SNS.

TSS: What does patriotism mean to you?

VP: We have never defended national errors, for example, what happened during the wartime Slovak State. But on the other hand, we strongly acknowledge the good things that have been accomplished through nationally oriented politics.