A MAJOR storm, dubbed "Emma", left almost 100,000 people in Slovakia without power on Saturday, March 1, with blackouts continuing in parts of the Záhorie region until Sunday evening. Strong winds, with gusts up to 120km/h, injured four people, the Pravda daily reported. 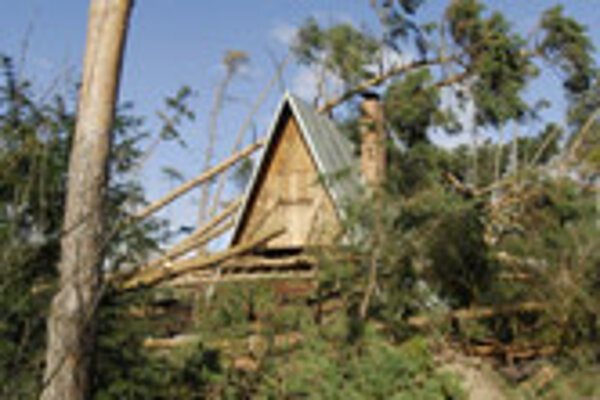 A MAJOR storm, dubbed "Emma", left almost 100,000 people in Slovakia without power on Saturday, March 1, with blackouts continuing in parts of the Záhorie region until Sunday evening. Strong winds, with gusts up to 120km/h, injured four people, the Pravda daily reported.

The Petržalka district of Bratislava witnessed a dramatic scene when a young woman was trapped after a falling tree crushed her car shortly after noon on Saturday. She was freed after an hour and taken to hospital in Ružinov, suffering from shock. "She was treated and released," Bratislava Teaching Hospital spokesperson Rút Geržová said.

Fallen trees also affected motorists, including those using the D2 highway between Kúty and Malacky. In other places, roofs were blown off and road signs torn down. The roof of one house in Vinohrady nad Váhom had to be secured by firemen; in Plavecký Štvrtok, the gale peeled back sheet metal cladding the medical centre; and in Rohožník, a kindergarden and a restaurant lost their roofs.

Blackouts struck across most of western Slovakia, with the exception of the Trenčín Region; and in central Slovakia, about 20,000 households were also left without electricity on Saturday. Connections were restored, but more outages were reported on Sunday: "Many people from the Bratislava Region returned to find found their households without power," explained Ján Orlovský, a spokesperson for Západoslovenská Energetika, the regional power distributor in western Slovakia.

He also expressed surprise at the fact that pylons had been downed. This was caused by falling trees which, despite growing outside the 15-metre safety area, still managed to strike and break the 22,000 kilo-volt cables.

Some municipalities in Záhorie - Malacky, Gajare and Leváre also lost power on Sunday. As a result, repairs took longer and were completed only on Monday, Orlovský added.