THE AVOCAT law firm and the Doxx food vouchers company are proving remarkably successful at winning contracts from state institutions led by nominees of the Slovak National Party (SNS). Coincidentally, the owners of both firms know SNS Chairman Ján Slota. 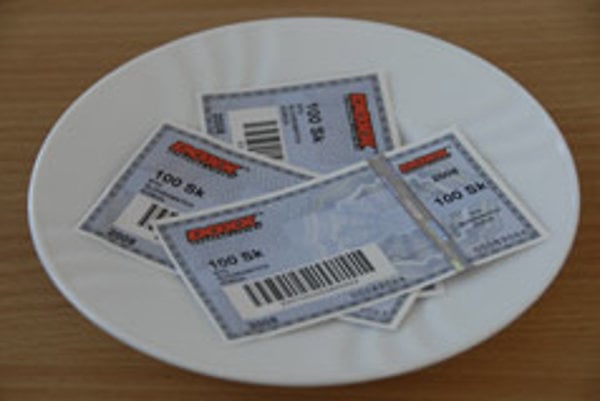 THE AVOCAT law firm and the Doxx food vouchers company are proving remarkably successful at winning contracts from state institutions led by nominees of the Slovak National Party (SNS). Coincidentally, the owners of both firms know SNS Chairman Ján Slota.

At the National Property Fund, where Peter Šimko (SNS) is the chairman of the presidium, the Avocat law firm recently had a Sk20 million contract, which it signed in late 2006, increased to Sk30 million without a public tender being held.

Slovenská Pošta, the national post office controlled by the SNS, is still buying food vouchers from Doxx after a new tender was scrapped in January. Doxx's owner, Milan Šmehýl, also owns the four-star Dubná Skala hotel in Žilina, where Slota gave an inaugural speech in 2006.

At the Construction Ministry, led by SNS nominee Marian Janušek, Avocat is doing advisory work on the use of EU funding, and was awarded contracts in 2006 and 2007 for various legal work. Meanwhile, Doxx was the only company to pick up tender documents for a Sk40 million food voucher contract awarded by the ministry. The documents were made available for only 10 working hours between Friday, February 22 amd Monday, February 25. Other food voucher firms accused the ministry of keeping the time window brief to favor Doxx.

And at rail operator Železničná spoločnosť (ŽSSK), led by SNS nominee Milan Chnupek, Avocat is also doing legal work, while Doxx was again the only firm to cast a bid for a Sk105 million contract. Competitor firms said they didn't even know a tender had been announced.

Tender experts say that in general, procurement abuses are the result of loopholes in the Public Procurement Act. "The law has not resolved issues surrounding the way tenders have to be announced, and does not address what happens after contracts are signed, such as appendices that get added later and can completely change the outcome," said Petra Kundera from the Fair Play Alliance corruption watchdog.

"If the main aim is to misuse public funds, for example, we may see attempts to skirt the law or find loopholes that can be used."

Slota would not answer questions from The Slovak Spectator about his relationship with Avocat. "I can't [spare a moment], goodbye," he said, and then hung up.

Juraj Hatvaný, co-owner of Avocat, did not respond to repeated requests to his office for comment. However, an MP for the opposition SMK party, Gábor Gál, who is a former classmate of Hatvany's from law school in the early 1990s, said that Slota and Hatvany knew each other well.

"They're friends," he said. "I know this to be true because some of my colleagues complained to me about it. Avocat is the law office that the SNS party uses. They did that audit for the Construction Ministry, they do all of Slota's legal work. They have good contacts, and they know how to go with the political flow. Under the previous government they did some legal work on the KIA investment [in Žilina], and that's where they met [then-Žilina Mayor] Slota."

In December 2006, the National Property Fund (FNM) signed a Sk20 million contract with Avocat without a public competition. The firm was engaged directly through a closed-door negotiation, with the FNM saying the pressure of time permitted the work to be awarded in this way.

Avocat was engaged principally to advise on "unbundling", a process in which energy firms were required by the EU to break up their energy production and transmission businesses by July 1, 2007.

Under the previous government, three different law firms, including Avocat, had been engaged to advise on the unbundling of energy distribution companies SSE, VSE and ZSE for Sk1 million each. Now, Avocat was handling all the work for about Sk12 million. Moreover, much of it was already done - Avocat's unbundling plan for SSE had already been approved by the previous Dzurinda government in June 2006, while the other two state companies had "practically identical shareholder structures and the same management role for the foreign shareholders," according to FNM spokesperson Tatjana Lesajová.

Of the remaining Sk18 million on Avocat's FNM contract, Sk10 million was added later for legal advisory work on the audit of the final accounts of the Slovenské Elektrárne utility. But according to information obtained by The Slovak Spectator, the same work had already been done by international law and audit firms such as Deloitte & Touche and Linklaters, and these analyses were given to Avocat to work from.

Many of Avocat's other paid tasks for the FNM are defined only vaguely, such as "a complex analysis of relations between the Fund and various ministries", or "an evaluation of the activities of joint stock companies wholly owned by the FNM".

Coincidentally, after Avocat was given the job of analysing SE's documents, Ján Slota said that the planned audit would show that the privatisation sale of SE to Italy's Enel had been "a thousand-times greater fraud" than the privatisation of the SPP gas utility.

"Apart from the enormous growth in the price of these services, the way in which the contract was expanded by an appendix and without a tender was very suspect," said Ivan Štefanec, an MP for the opposition SDKÚ party. "Above all, the fact that a single private firm has in its grasp all of the most important transaction documentation creates a risk that this information will be misused for political ends, and will allow the current government to claim, without foundation, that the previous government did not act in the best interests of Slovak citizens [in selling these energy companies]."

Last month, Prime Minister Robert Fico attacked the previous Dzurinda government for its handling of the sale of the SPP utility in 2002, claiming among other things that the tender advisor had been overpaid, and that the sole bidder, a consortium between Gaz de France and Ruhrgas, had had inside information.

But FNM spokesperson Tatjana Lesajová said that the selection of Avocat to handle so much of the fund's business was actually a way of protecting sensitive information. "Having renowned advisory firms like Avocat offer these services, in view of their professionalism and their internal mechanisms, is the best way of preventing information leaks."

Three weeks ago, the Interior Ministry cancelled a non-transparent Sk2.5 billion tender for food vouchers that was won by Doxx. Since then, The Slovak Spectator has learned that the Žilina firm is supplying many state institutions that are under the leadership of an SNS nominee.

At the SNS-controlled Slovenská Pošta, for example, where Hatvany of Avocat is head of the supervisory board, and Doxx director Pavol Jandzík's ex-wife Kamila is the head of human resources, Doxx continues to supply the firm with food vouchers on the basis of a contract signed in 2005. A new tender worth Sk850 million over four years was called in February 2007 but scrapped in January. The Post Office has to date not opened a new tender, meaning that Doxx is providing over Sk200 million worth of food tickets without having gone through the proper procurement channels.

Post Office spokesperson Andrea Pivarčiová denied that the selection process was influenced by politics: "In choosing providers of goods and services, Slovenská Pošta follows the Public Procurement Act, and we categorically rule out any political influence."

But Libor Daněk of competitor firm Vaša stravovacia told a different story. After losing the Slovenská Pošta contract to Doxx in 2005, he had put out inquiries as to how to prepare for the 2007 tender. "I was informed that the provider had already been chosen, and that it was Avocat that decided, Dr. Hatvany," he said. "When I called Avocat and said I would like to discuss the possibility of cooperation, I was told that they saw no reason to cooperate with my company."

Jandzik said of Hatvany that "I don't know him and I have no idea who he is." He also denied that his ex-wife's position at the post office could have any influence on the Doxx contract. "Mrs. Jandzíková couldn't have helped us get the Slovak Post contract, because she's only worked there since December 2006, and we got the contract in 2005 during the Mikuláš Dzurinda government," he said.

Nevertheless, Doxx is having remarkable success at other SNS-controlled state institutions. At the SARIO investment agency, Doxx has been providing food vouchers since September last year. SARIO director Peter Hajaš, a Žilina native, does not deny being friends with Slota. "I could answer that question, but I don't know if we should go into such private matters," he said. But Slota told the Žurnál weekly in 2006 that he had been responsible for getting Hajaš nominated: "Put it this way, I had a certain amount of influence over it," he said.

ŽSSK spokesman Miloš Čikovský repeatedly ignored requests for information about food vouchers, but finally admitted that ŽSSK had signed a three-year, Sk105 million contract with Doxx, and that Doxx had in fact submitted the only bid. The other firms on the food voucher market had not been informed a tender was being held.

In the same way, Doxx was apparently the only food voucher company to pick up tender documentation for a Sk40 million contract at the Construction Ministry, and thus was the only company allowed to submit a bid by the March 11 deadline.

Marián Drozd, the contact person on the tender at the ministry would not give out information on the number of bids that were received, but Jandzík of Doxx said that his firm had noticed the tender on its own.

"Our company has an employee who constantly searches for and keeps track of tender announcements seven days a week," he said. "This employee also noticed the Construction Ministry tender on its website, and our company subsequently picked up the tender documents and submitted a bid within the set time frame."

But the directors of the largest food voucher firms on the market all said they had not noticed the tender, and were thus unable to participate. "They are doing it deliberately," said Štefan Petrík of Cheque Dejeuner. "It's completely against the spirit of public procurement," said Pierre Gagnon of Accor. "We noticed it three days past the deadline," said Vaněk of Vaša Stravovacia.

Another state company that is about to open a tender for food vouchers is the ŽSR state railways administration, according to spokesperson Martina Pavlíková. In October 2006, Transport Minister Ľubomír Vážny named Juraj Mravčák, another co-owner of Avocat, as the head of ŽSR's board of trustees.

ŽSR's current provider is Cheque Dejeuner. Petrík said he feared for the transparency of the tender. "After the experiences we had with the ministries, we have to be worried."