THE TREACHEROUSNESS of Slovakia's mountains are familiar to thousands of foreign tourists, and yet many are still hiking here without adequate insurance. 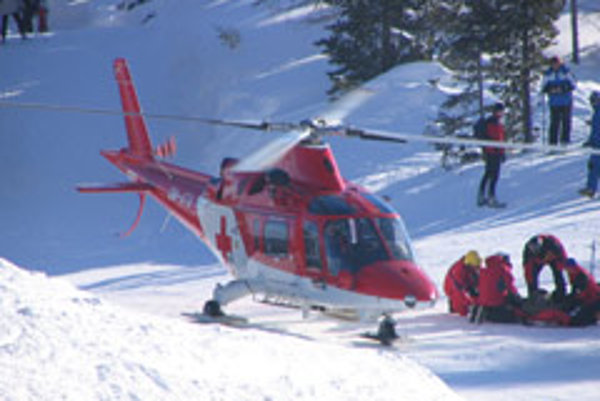 The mountains can be dangerous, but help is at hand. (Source: Courtesy of ATE)
Font size:A-|A+  Comments disabled

THE TREACHEROUSNESS of Slovakia's mountains are familiar to thousands of foreign tourists, and yet many are still hiking here without adequate insurance.

In order to be completely safe in the mountains, foreign tourists need to have insurance that covers the costs of a possible mountain rescue, as well as evidence that they have public healthcare coverage in their home country.

Since 2006 the Slovak Mountain Rescue Service (HZS) has charged tourists for being rescued. So both Slovak and foreign tourists should have commercial insurance when going to the mountains; if not, they face having to pay all the rescue costs themselves.

However, commercial insurance alone does not cover everything provided by medical rescue services, so health insurance cover is also necessary. Those being rescued must show a document proving that they have health insurance cover. Tourists from a European Union country need only a European Health Insurance Card (EHIC) in order to get, for example, medical evacuation by helicopter.

"While the operations of the HZS are covered by commercial insurance, helicopter rescue flights are paid for by the public health system," Pavol Svetoň, spokesman for the Air Transport Europe Helicopter Emergency Medical Service (ATE) said.

Without the EHIC card, which is evidence of public health coverage, these costs cannot be repaid, Svetoň said.

"Unfortunately, many tourists are coming to Slovakia with literally nothing whatsoever, whether it be an EHIC or commercial insurance," he told The Slovak Spectator.

Though debts owed to the helicopter emergency service by tourists who fail to show evidence of their public health coverage have been falling, tourists still lack awareness of the cost of rescue.

"Within the last three years, we have saved the lives of 30 Polish tourists" he said. "Before Slovakia joined the European Union, they used to owe almost Sk8 million (€243,000) to our company. Now, the debts have decreased and stand at about Sk2.5 million (€76,000)."

After tourists find out how much they are supposed to pay, they frequently try to get the card issued after the accident, he added.

The helicopter emergency service often has to recover debts through court action and seizure of property, which can be a very difficult and bothersome process, he said.

Out of approximately 600 rescue flights each year, 40 percent involve foreigners, according to Svetoň, the most accident-prone being Poles and Czechs.

"The main advantage of the card is that it enables reimbursement of necessary medical treatment expenses regardless of age, chronic illnesses or cost," she told The Slovak Spectator.

Even though these prices may seem low, foreign tourists owe the HZS as much as €24,600 (Sk809,000), its director Jozef Janiga told The Slovak Spectator.

"After one of these units is notified, a rescue plan, including use of helicopters and other equipment is decided upon according to weather conditions and other circumstances," he said.